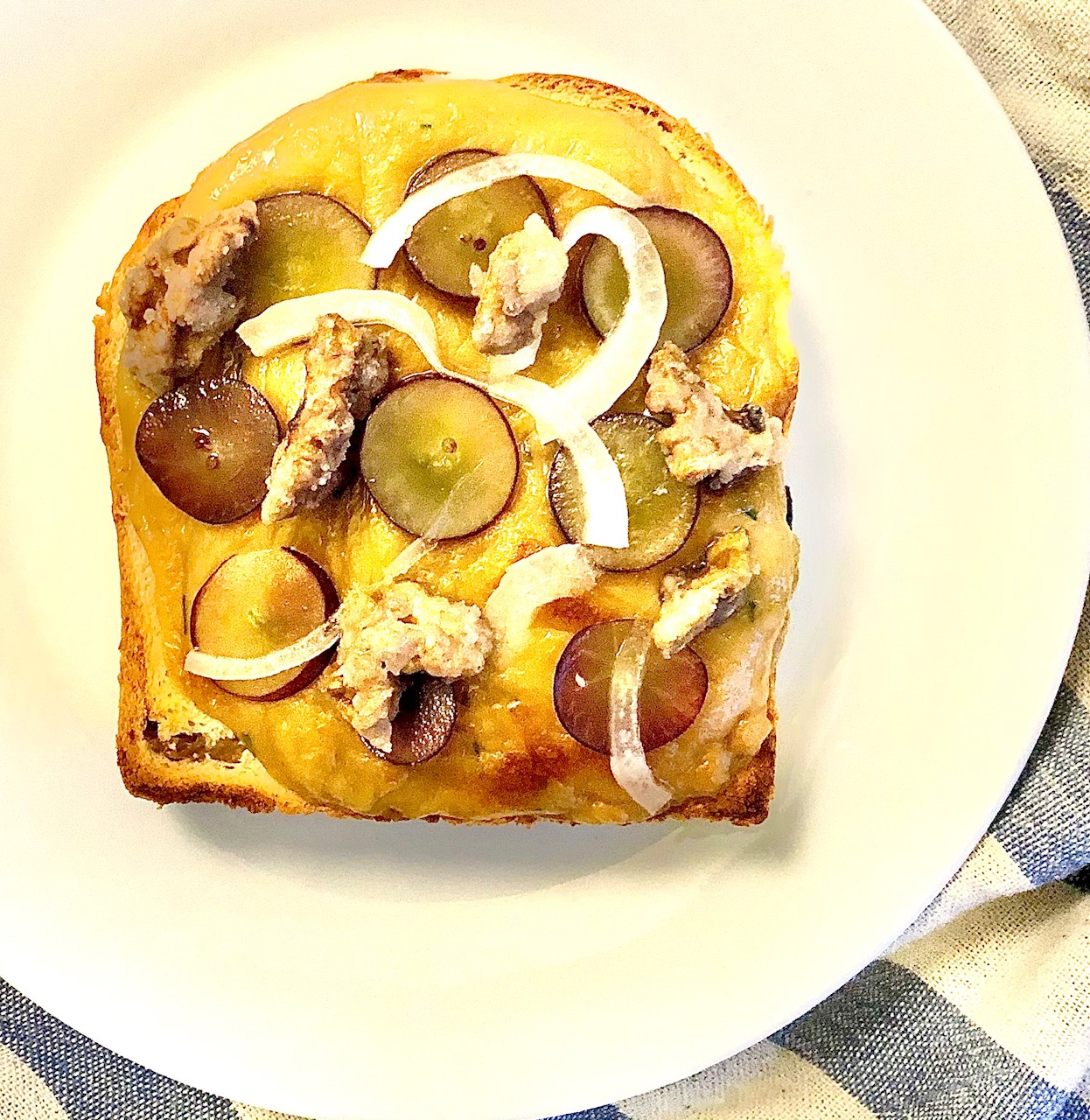 inspired by The Pony & Trap

Last but by no means least we have my cheese course for my fantasy seven course, seven restaurant menu.

I love cheese. It’s a bit of an addiction really. There’s always far too much of it in the fridge.

I’m just as likely to reach for a piece of cheese as a guilty snack or late night treat as I am something sweet. Cheese is just so utterly comforting and delicious.

But I’m not always a fan of a cheese course in a restaurant.

I mean, I will happily eat one. If you put cheese in front of me I will eat it. I’m not in any way suggesting that a restaurant can’t put together a decent cheese plate.

But that’s just it, isn’t it? They just put it together. No cooking involved.

I do feel a little disappointed when all you get served with your cheese in a restaurant is a few meagre crackers and some grapes. Or worse still they simply give you more of the bread that you started your meal with.

The cheese is delicious, but their accompaniments are so often lacking. A decent homemade chutney for me is not enough of an effort to justify the pricetag that often comes with the cheese selection.

I understand that brilliant artisan cheeses aren’t cheap. Nor should they be. But when the time the chef has spent on them is simply chopping them into pieces, you do start to wonder why you don’t just buy the cheese yourself.

Now a dessert on the other hand, is a different story entirely.

Yes the ingredients might cost far less, but you get a bit of cooking magic every time you order a pudding. I can’t make something with all those layers and spheres and dusts. I don’t have the kit to make that foam or that perfectly burnt caramel top.

As we discovered yesterday I can’t even make a Tarte Tatin properly.

This is why I would pick a dessert over a cheeseboard in a restaurant. I want to pay for someone far more talented than I will ever be, to make me something that I could never make at home.

I can buy and slice cheese. Even I can’t mess that up too badly.

However every now and again there is a restaurant that challenges my not so high expectations of a cheese board. I remember being out for dinner once with family. I ordered a banoffee pie inspired dessert. Which was delicious.

But the cheese board the others had ordered to share was giving me food envy.

After the waiter put down a slate with five pieces of cheese, he then put down a second slate. Each of the five cheeses had their own accompaniment. Each made in house. And not a boring cracker or grape in sight.

I remember one of them being a slice of fruit cake. That really made me smile.

Eating fruit cake and cheese together is a long held Yorkshire tradition. With Yorkshire blood in my family, my mum simply cannot have a slice of Christmas cake without some cheese with it. She likes blue cheese. I prefer cheddar.

But either way cheese and fruit cake is a thing. And it’s amazing.

So it’s no wonder that this dish from The Pony & Trap caught my eye when it popped up on Instagram….

“Westcombe cheddar rarebit, our fruit loaf, grapes, pickled shallot, candied walnuts & honey – this guy is up there as one of our finest cheese courses ever!”

So says their social media, and I have to agree. Admittedly I have zero knowledge of what their other cheese courses have been, but this really does look incredible.

I can’t help admiring the sheer amount of work and imagination that has gone in to making what is essentially cheese on toast. It’s brilliant!

I first heard about the Pony & Trap when the chef patron Josh Eggleton was on the Nightcap Podcast. This Michelin starred Somerset pub has been closed throughout the pandemic. But they’ve still been pretty busy.

They have done meal kits and at home cook-a-longs. They continually championed their producers and suppliers. Most importantly they have supplied thousands of meals for homeless and vulnerable people.

And last summer, when hospitality could open (doesn’t that feel like a lifetime ago??) they set up a pop up at Breaking Bread in Bristol. An amazing concept of outdoor dining from many of Bristol’s finest chefs and producers, all in one garden setting.

It will be back for summer 2021. Hopefully the Pony & Trap pub will be open too.

But until then I’m making cheese on toast.

So I need to start with the bread. In this case a fruit loaf.

As much as I love cheese and cake, I feel this fruit loaf needs to be a bread, not a sort of tea loaf cake that my initial google search comes up with.

A bit of research later and I stumble across an amazing fruit loaf recipe from Eat Little Bird. I follow the recipe almost to the letter. I just mix up the dried fruit a little, based on what I have. So instead of 100g of raisins and 50g of apricots, I add 50g sultanas, 50g apricots and 50g of dried figs.

It works brilliantly. And considering I am by no means a talented baker, for something to work first time is pretty bloody fantastic.

I need to get better at incorporating the fruit into the dough, but other than that I wouldn’t change a thing. This recipe is a keeper!

The bread is also just toasted on it’s own and eaten with butter. Basically a bit like a teacake or a hot cross bun but slightly less sweet. In fact I’m tucking into my second slice as I read about how to make a rarebit.

A trip to the wonderful Neal’s Yard Dairy has provided me with the Westcombe Cheddar I need. But what else?

Turns out making rarebit is a bit like making a béchamel based cheese sauce. Just instead of adding milk you add beer.

So not the sort of cheese on toast to have for breakfast then.

Some recipes call for ale, others stout. I got for a stout, mainly as there’s a bottle of that in the garage that Aidan isn’t fussed about drinking.

So once my butter and flour are mixed into a roux in goes the beer. Then the cheese.

A lot of cheese.

What you end up with is a really amazing thick paste. So thick it moves around the pan as one delicious looking mass, rather than the wooden spoon cutting a path through it.

But it’s the perfect consistency to spread onto a lightly toasted slice of fruit loaf.

Under the grill it goes, until golden and bubbling.

I quickly slice a shallot (well technically it’s a very small onion, don’t tell anyone) and leave it to infuse in a mix of vinegar, sugar and water.

I chop up some grapes and fish the honey out from the back of the cupboard.

Oh wait, hang on. I’ve forgotten the walnuts. How do you candy a walnut? And more importantly, how do you do it quickly??

I put some sugar and a dash of water in a saucepan on a medium heat and let it melt slowly and bubble to form light caramel. I tip in some walnut halves, muddle it about a bit and then tip the lot onto a baking sheet to cool.

After inspecting my efforts I think I could have left my caramel a little longer. My nuts are coated in a sugary coating, but it’s not that dark golden brown you associate with a good caramel.

Once again cooking with sugar seems to be my downfall.

However once on top of the cheese on toast, along with the grapes, shallots and honey, it turns out the walnuts are a lovely addition. Perhaps next time I wouldn’t even bother trying to caramelise them.

So there you have it.

Mountains of washing up. Thousands of calories.

I’ve gone through more packs of butter than I dare admit to.

But I’ve done it. I have well and truly started 2021 in the best way possible.

Anyone trying to get through January detox and a lockdown? I applaud you. I really do.

But I mainly just think you’re mad. Go on, make yourself some cheese on toast and be happy.