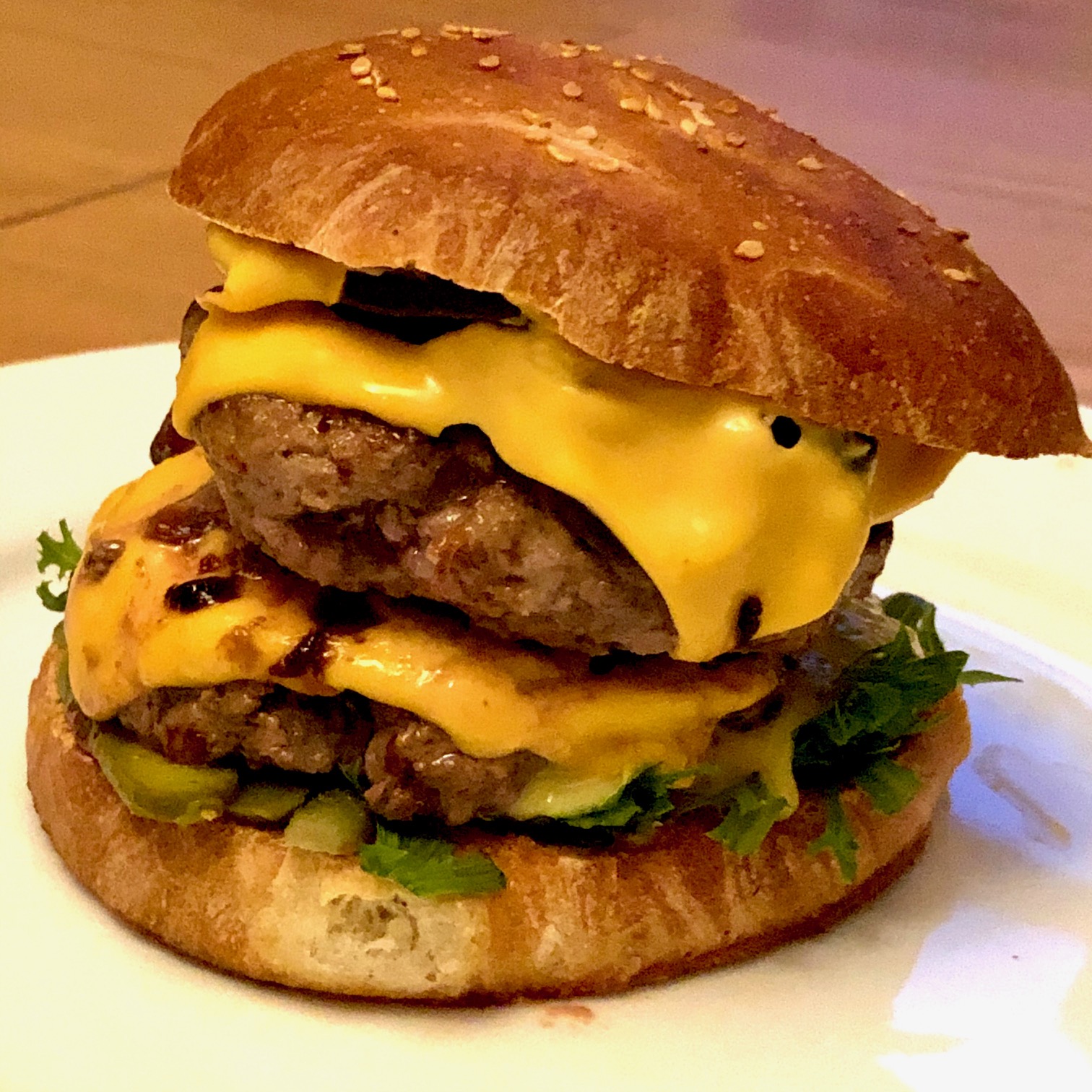 I’ve found it incredible how restaurants have been adapting in the current circumstances. Opening for takeaway, changing their food offerings, becoming farm shops.

The latest trend is to offer meal kits that get delivered to you at home to finish cooking yourself.

Which is great. It really is.

But as someone who has spent the last sixty-odd days trying to make restaurant food at home, I can’t help but feel that, for me, it would be cheating. I love trying to work out how a restaurant might make something, what ingredients go into it, or how they put a dish together.

Sure I’ve used the odd youtube tutorial. I’ve even watched chefs from these restaurants cooking on Instagram. But I still make it all myself.

When I started this blog one of the first things that popped into my head to make was a Venimoo. Which is an incredible burger from Mac & Wild.

This Scottish, but London based, restaurant focuses on produce from the Highlands. Set up by Andy Waugh and Calum Mackinnon, they employ something called “extreme traceability” which means they know exactly which Scottish farm, or in the case of wild food which piece of land, each animal has come from. Andy’s father is a game butcher in Scotland. It’s a family affair.

So I guess their thinking went along the lines of – how do we make a beef burger better? The answer was to add a venison patty as well. And so the Venimoo was born.

So if I’m going to do this I’m going to go all in. That means making it all from scratch. Including the burger buns.

Now I know this might be a bit controversial but I’m not a huge fan of brioche burger buns. I like brioche in the mornings, maybe with chocolate in. You know like those mini ones you get at hotel breakfast buffets?

But with a burger I find it all a bit sweet and a bit mushy. I would rather have something a bit more robust.

I use this BBC Good Food recipe to make some crusty rolls. It’s an easy recipe to follow. I halve the quantity to make four buns, which by my logic means I have to only get two of them right and dinner will still be OK.

The tip of bringing the dough together and kneading on an oiled board with oiled hands is really good. Usually when I’m trying to handle a sticky dough I end up constantly adding more flour. Apparently this could make them tough, so the oil does the same job as the flour but keeps them soft. I’m making all my bread like this from now on.

They may have had a little too long to prove (I was having a chat with my family and totally lost track of time!) so they are quite large and flat when they go into the oven.

The recipe says to bake them for 25-30 minutes. Mine are done in sixteen.

Two are much larger than the others. However the size ends up being a good thing. As I may have made my patties quite big too.

The reason it’s taken me a while to cook this burger is that I needed to get my hands on some venison mince. Which meant a trip to Blackheath to John Charles Butchers. In fairness I just asked for enough mince to make two burger patties. I probably should have explained that these were not the only patties going into this burger.

So now I’ve matched the venison patty (just seasoned and bound together with a bit of egg) in size with a beef one too. I decide to skip the optional bacon… this looks like more than enough meat already!

A slight hitch in making the Béarnaise sauce is that I can’t find any tarragon. This sauce is basically just a hollandaise with tarragon running thought it. So I have to improvise and make it with parsley instead.

Onions are caramelised by cooking slowly in a pan for about 40 minutes. I don’t add any sugar as I don’t want them to taste like a chutney.

The last garnish to prep is the Red Jon sauce. A bit of research and I discover this is a mix of redcurrant jelly, Dijon mustard and whiskey.

Technically we do have all of these ingredients in the house. But I’m not sure how Aidan would feel about me using his single malt to make a burger sauce. Actually that’s a lie, I know exactly how he would feel. Not good.

So I have to admit I cheat a little.

Once I’ve toasted the burger buns the base gets topped with a good squeeze of ketchup instead.

From Heinz. Not made from scratch.

Then on goes shredded lettuce and the béarnaise.

Mustard for Aidan and gherkins for me.

It’s quite good being able to tailor this Venimoo to our individual tastes!

Now to cook the meat. The burgers go in the pan. I was worried I wouldn’t be able to tell the two meats appart. It wouldn’t do if someone ended up with all the moo in their burger. That’s definitely not the point.

But it’s so easy to see the difference in colour. Once the patties are nearly cooked cheese gets added to the beef. Onions and more cheese get stacked on top of the venison.

I should mention this is proper burger cheese.

The individually wrapped squares of orange plastic. But I’m not counting this as cheating. Making cheese once this week was enough!

Then in a slightly precarious manoeuvre I have to try and get the venison patty on top of the beef one. Top with the burger buns and let it all melt together. This smells incredible.

Now one last delicate movement to get the burger on top of the base and it’s ready.

I’ve discovered one amazing plus to eating a Venimoo at home. You’re not trying to protect your clothes (and your dignity) whilst eating it in a nice restaurant.

I’ve got béarnaise sauce on my chin and ketchup down my T shirt and I don’t care. Because it tastes amazing.

So there you have it. A restaurant burger from scratch.

Or you could just order a lovely kit from Mac and Wild if you want to save yourself some time. And quite a bit of washing up.