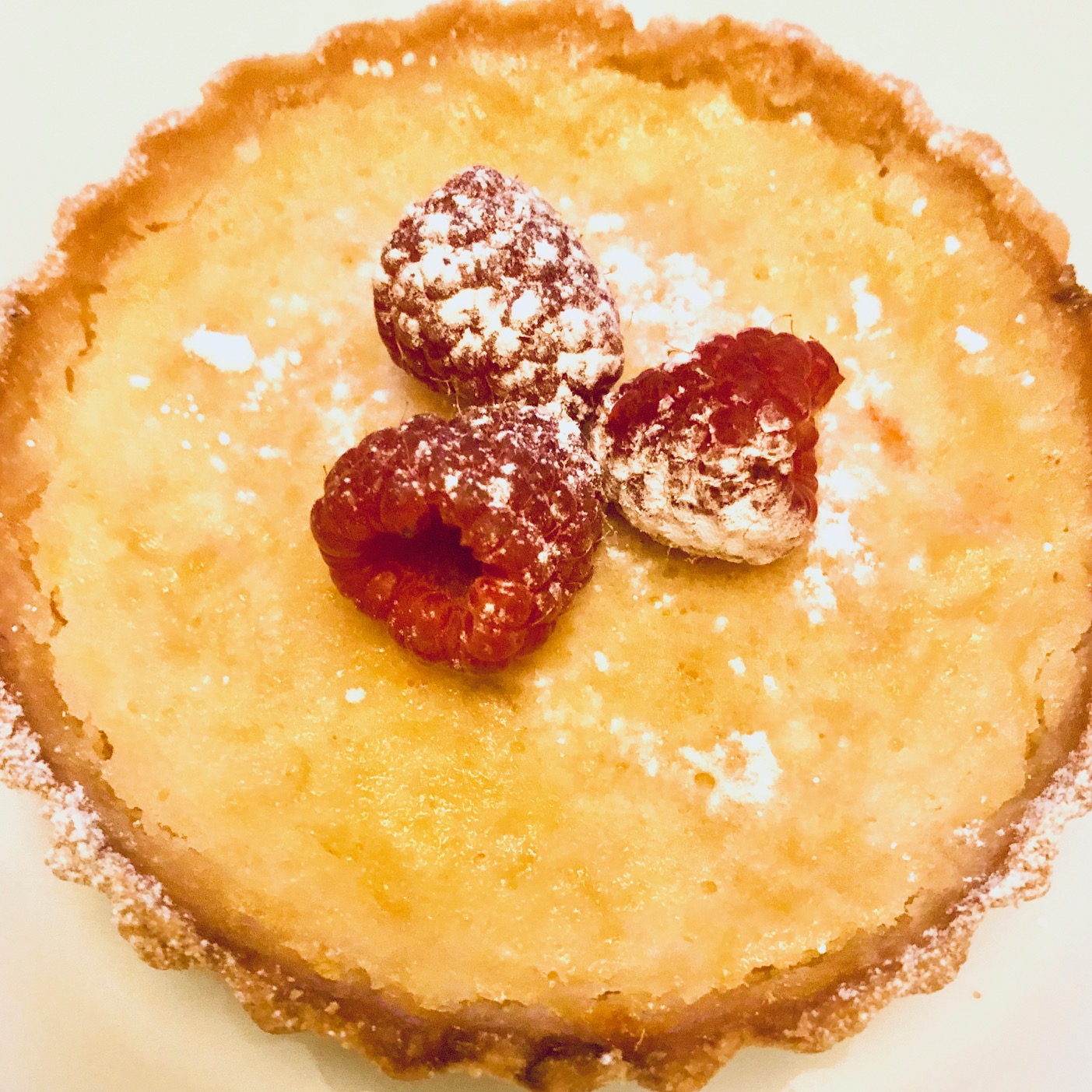 After being inspired by The Garrison I’ve been thinking about Bermondsey Street. One of my favourite streets in London. Mainly because it’s got so many good restaurants on it.

One of which is Casse-Croûte. A tiny French bistro complete with chalkboard menu, checkered table cloths and really good wine. You feel like you’ve stepped into an incredible chic French film whenever you go there.

So what to cook inspired by Casse-Croûte? It has to be something classically French.

It has to be Tart au Citron.

I’m feeling confident after my success with bacon scones a few weeks back. I’ve convinced myself that my non existent baking skills are now actually starting to exist.

If I can make a scone I can totally make a tart.

In fact I already have made a tart. A three onion tart. So all I’m doing is making a sweet filling rather than a savoury one. Easy.

For this classic French tart I’m looking to the British classic that is Mary Berry for the recipe.

I’m going to make three smaller tarts rather than one large one. For no other reason than I only have small tart cases. And I only have three of them.

I know how to make pastry. That’s easy enough. I don’t usually make sweet shortcrust though. But it’s basically the same just with the addition of some icing sugar and an egg yolk. I discover pretty quickly that its not a good idea to mix too vigorously when you add icing sugar. It clouds up out of the bowl and gives my face (and half the kitchen) a fine dusting.

Once the pastry has come together it’s into the fridge to chill. Mary Berry says to roll it out first then chill it. But it’s warm today so I’m going to chill it now, and then again after it’s in the tart cases.

Rolling out the pastry is easy. It doesn’t even matter if it cracks a bit when it goes into the pastry cases. I can just patch it. No one will ever know.

Back in the fridge to chill. I remember to leave the excess pastry on the tarts as they will shrink in the oven. Look how much I’ve learnt over the past few months!

10 minutes later I’m staring at three very burnt pastry cases. What did I do wrong? Back to the recipe. Nope. Mary Berry definitely says bake them for 10-12 minutes.

I have a nibble of the edge of one. Not nice. It tastes burnt as well as looks burnt. No hope of saving these so they go into the bin.

I make the pastry the same way. But this time I have the oven at 160°C. I blind bake for 15 minutes (so longer than before) and then put them back into the oven for their second bake. I watch them like a hawk.

At the first sign of browning out they come to cool. They needed 8 minutes at 160°C. They are not burnt. Phew!

Sure one has shrunk inside the case a little bit but that’s fine. I just won’t fill that one as much.

Onto the filling mixture. I break three eggs into a bowl. Well actually I break two eggs into the bowl and reach for the third egg. Which I manage to break whilst picking it out of the egg box. How did that happen??

My immediate reaction is to fling the egg into the bowl so as not to waste it. Which means I spend the next five minutes picking egg shell out of the mix.

After clearing up the kitchen and myself I continue.

I add the cream. Because I’ve only used three eggs I use 75ml of double cream. I don’t reckon many bakers measure their liquid ingredients with a bar spirits measure. But I do. In goes a single and a double shot of cream. A triple of double cream.

In goes lemon juice, zest and caster sugar and I whisk it all together. Into a jug and then poured into the pastry cases.

Oh. Hang on. Mary Berry says to fill them half way and then put them in the oven and top up there. So you don’t spill them.

I look at my slightly flimsy baking sheet that the very full tarts are sat on. No way am I getting that into the oven without a disaster. I get a sturdier oven tray and transfer the tarts to that.

But even that causes a spillage. I wipe as much mix out of the oven tray as possible and really gently place the tarts in the oven.

Mary says to cook them for 30-35 minutes. Hmmm. I check them after 25. They seem set on top but I give them an extra two minutes. Just in case.

Then out to cool.

It’s then I realise that I forgot to trim the pastry from the edges of the tart case before I filled them. Damn.

I take a knife and try my best to trim off the excess pastry without getting crumbs all over the set yellow filling. This is semi successful.

Now to take them out the tins. Deep breath. Mary recommends using a jar or tin to place the tarts on top of and then slide the rings off. A jar of mango chutney turns out to be the perfect size.

Getting the sides of the tins off is easy enough. But the bases are another matter. There seems to have been quite a lot of leakage. Which means the filing has got under the pastry base and formed a kind of lemon scented glue, welding the pastry to the metal base underneath.

I go and get the sharp knife again and begin the painstaking process of trying to gently prise the tarts free. I bet this doesn’t happen when Mary makes them.

Finally I have three lemon tarts all free of their bases. I smile. Sure two are not perfectly shaped, all three have leaked and there is still egg on several of the cupboard doors.

But I reckon one tart looks OK. Especially from one side where you can’t see where the filling leaked out.

I look at it with pride. I can make a tart. I can bake.

I look again. There in the centre of my one presentable tart au citron, just underneath the skin of the filling, is a lemon pip.

So it seems my baking prowess is no greater than before. I am still a bit of a disaster in the kitchen when it comes to all things sweet.

I’m not sure if he’s taking about my baking skills or just me in general.