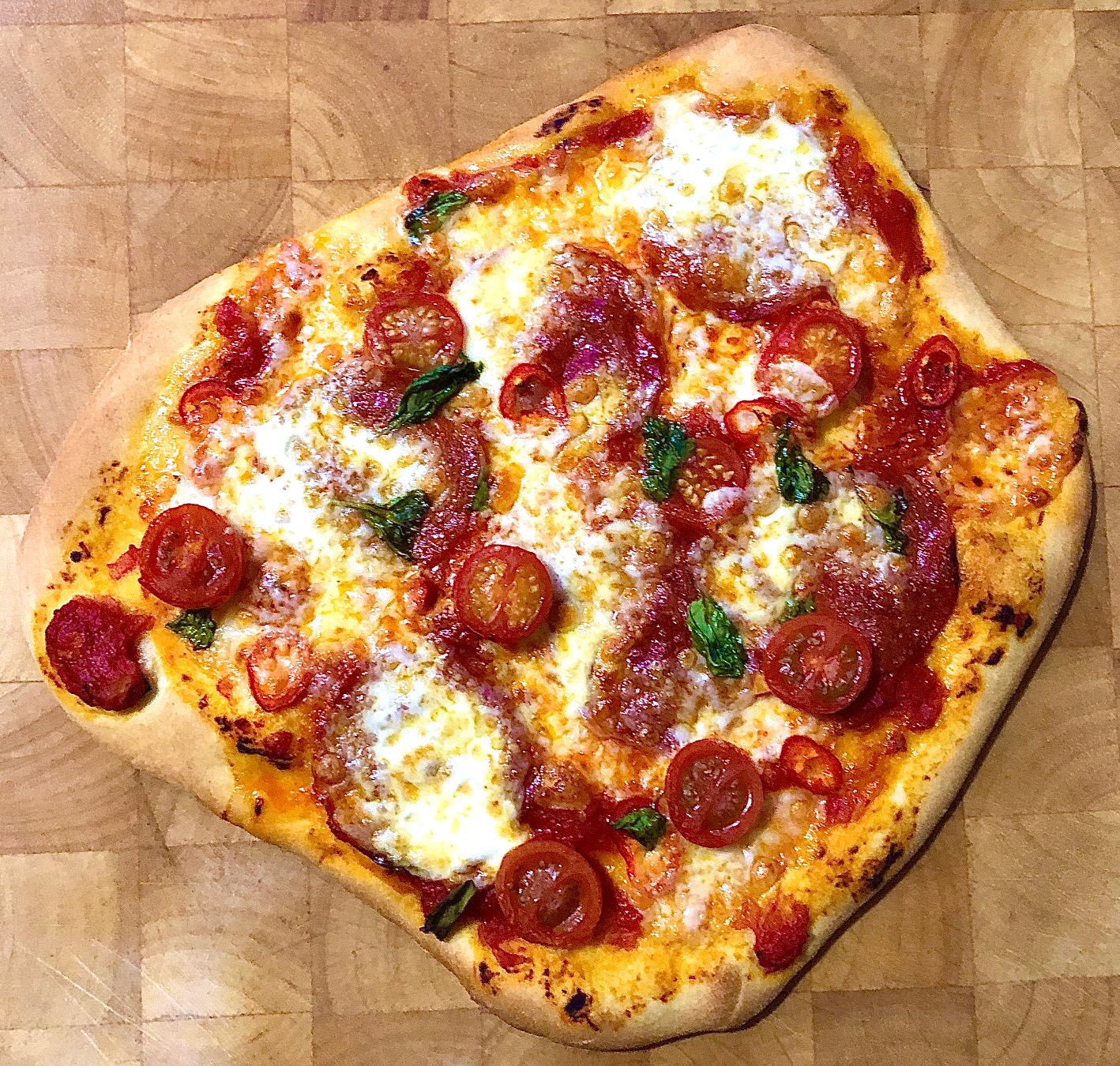 inspired by The Lauriston

“You must be so excited!”

After the government announced yesterday that pubs, cafes and restaurants can reopen from the 4th July, the messages from friends started to arrive. It was a good day. It felt like light at the end of the tunnel.

But it’s not that all pubs and restaurants have sat in hibernation, waiting for this. Many have kept working. Many have adapted and transformed. Takeaway, home meal kits, zoom cooking classes… the list goes on.

For every post on my Instagram feed announcing a reopening, there was also a post about a takeaway service. It’s not as simple as businesses going from closed to open. Many have remained open, one way or another. And many will need to keep their takeaway/at home/deli options going alongside normal service, in order to survive.

The Lauriston is a great example. An East London pub right by Victoria Park. They make amazing pizzas! When Aidan and I first moved in together this was one of our local haunts.

Their instagram feed has been making me very jealous recently. They’ve been doing takeaway pizza and drinks. So you could go into the pub, get your pint in a plastic glass, and pick up your pizza before heading out into the park to enjoy your food and drink. Oh, how I wanted to still live nearby!

I doubt the Lauriston will stop this takeaway option – especially when the sun shines – because it massively increases their ability to serve as many people as possible.

Lots of pubs and restaurants have been assessing exactly what a COVID safe environment will mean for their capacity. Many reckon they won’t be able to fit more than 50% of the customers they did before.

Every business is different. But it’s likely that pubs will have to adapt the most. Or at least their customers will.

In a restaurant we, the customers, are used to staying sat at a table. We expect our drinks and food to be brought to us. We would not (or at least most people would not) simply go into a restaurant and sit down, or start rearranging the furniture, without asking a member of staff.

In pubs we need to modify our behaviour more.

In order to control social distancing, and to keep contact between people to a minimum, customers will have to sit at tables.

Already that puts pubs at a disadvantage. Take away the people sitting at the bar, and the people standing, and you’ve probably lost half your potential business already. Before you space your tables out.

Likewise the culture of going to the bar will change. You will be asked to wait for table service. A member of staff will collect your empty glasses. Ideally you will order and pay through an app.

All of this goes against normal pub behaviours. The chat with the staff behind the bar. The popping over to another table to say hello to a friend. Standing room only to watch sport. Going for after work drinks with your colleagues. All not possible, under the government guidelines. Unless your work colleagues all come from the same two households. Unlikely.

Pubs and restaurants will also be asked to keep records of their guests for 21 days, in case the information is needed by the NHS Track & Trace service. Easier for restaurants, that rely mainly on a booking system anyway, than for pubs.

Another aspect of the government guidance (which was published this morning, it’s a thrilling read I can promise you) is that venues are to actively discourage customers from making too much noise.

All venues should ensure that steps are taken to avoid people needing to unduly raise their voices to each other. This includes, but is not limited to, refraining from playing music or broadcasts that may encourage shouting, including if played at a volume that makes normal conversation difficult. This is because of the potential for increased risk of transmission, particularly from aerosol transmission.

Again, restaurants might fair better here. Especially with tables further apart, if music is set to a suitable level there should be no need for customers to shout. Some restaurant customers will actually prefer this.

But in pubs? This means no change in atmosphere from a Wednesday lunchtime to a Saturday night. No singing along to ABBA after a few too many white wines. No dancing. Absolutely no karaoke.

And what about sport? How are customers going to react when they are told they can watch their team play, but they can’t raise their voice. It doesn’t matter if it should have been a penalty. Pipe down.

It is completely right for the government to put all of this guidance in place. But I can’t help thinking that all of the responsibility for managing this step back to normality has been placed onto the owners and staff of these businesses.

I think we, the customers, should share this responsibility. As much as the hospitality industry is having to adapt, so should we.

So, if and when you do go back into a pub or a restaurant, be mindful. Don’t get cross if you’re not allowed to add extra chairs to a table. Or if there isn’t space for you right now.

Don’t get impatient if it takes a bit longer for your pint to arrive.

Don’t think staff are now being unfriendly because they won’t always stop and chat when they give you your drinks.

Also, don’t complain if it’s not all running smoothly to begin with. Don’t ask for discounts or free drinks if something goes wrong. Don’t expect the customer to be always right. We are all in this together.

Be kind. Be supportive. Be patient.

I can guarantee each business, like everyone in the industry, are doing their best. They want to get back to normal just as much as you do.

In the same way that not all pubs and restaurants have shut, not all will instantly reopen. It’s up to each business to work out what is right for them. But when they do that is not the end of the problems. It’s just the beginning. This is where the work really starts.

When a new restaurant or pub opens they have what is called a soft launch. They need time to get used to their new working practices, their ordering systems, their steps of service.

Every business is basically going to have to go through this again. No matter how experienced they are. There will be a period where they are figuring things out.

Except this time they are expected to open their doors on a Saturday, to a public that has been starved of pubs and restaurant for months.

Many people in the industry are questioning why the government has decided to let pubs and restaurants open from a Saturday? Surely this just adds to the pressure?

So, yes, I would like to go to a pub on the 4th July. Chances are I will be helping reopen one, rather than just being a customer.

But I’ll be going to other bars and restaurants soon too. I can’t wait!

However, I’m doing it with the knowledge that it won’t be the same as before. And I want to do everything I possibly can as a customer to make it easier for that business.

But back to The Lauriston, and their truly amazing pizzas!

I’ve made pizza on this blog once before. Well, actually Aidan did most of the cooking last time.

This was the Parma Ham Pizza, back on Day 4. Which would have been one week after pubs and restaurants were told to close.

It was also that time when yeast was impossible to come by. So we made do, and followed a no yeast recipe.

Now that yeast is sat in my fridge (with another pot ready and waiting in the cupboard) it’s time to try again.

I loosely follow this BBC recipe. The difference between making pizza dough before and cooking it now is that I’m a more confident baker.

Not a great baker, no I’m a long way off that. But I have a bit more of an idea of what I’m looking for in a dough.

I make half the recipe, which is enough for two pizzas. It’s hard to say exactly what size they are as I’m not great at rolling or stretching the dough out into a circle. The diameter of my pizza would be much larger or smaller, depending on where you measured it across.

As I Designer, I would describe the shape of my pizza as organic.

So it made enough dough for two pizzas, which was enough to create two very full people after eating them.

I left the warm milk out of the dough. Instead I added in a little more olive oil – as that is what I’m familiar with when I make white bread. I’m following my instincts.

But I liked the tip of using 00 pasta flour to create a lighter crust. My pizza was definitely lighter than last time – but that might just be the yeast, thinking about it.

Aidan, predictably, had parma ham on his.

The pizzas were really tasty. The crust definitely puffed up more than last time and there was a nice flavour to the base.

But until I install a wood fired pizza oven in my kitchen I will never get close to a Lauriston pizza, or any properly made restaurant pizza in fact.

So my pizza will never be as good as the real thing. Just like our bar and restaurant experiences in the near future might not be quite as good as what they were before.