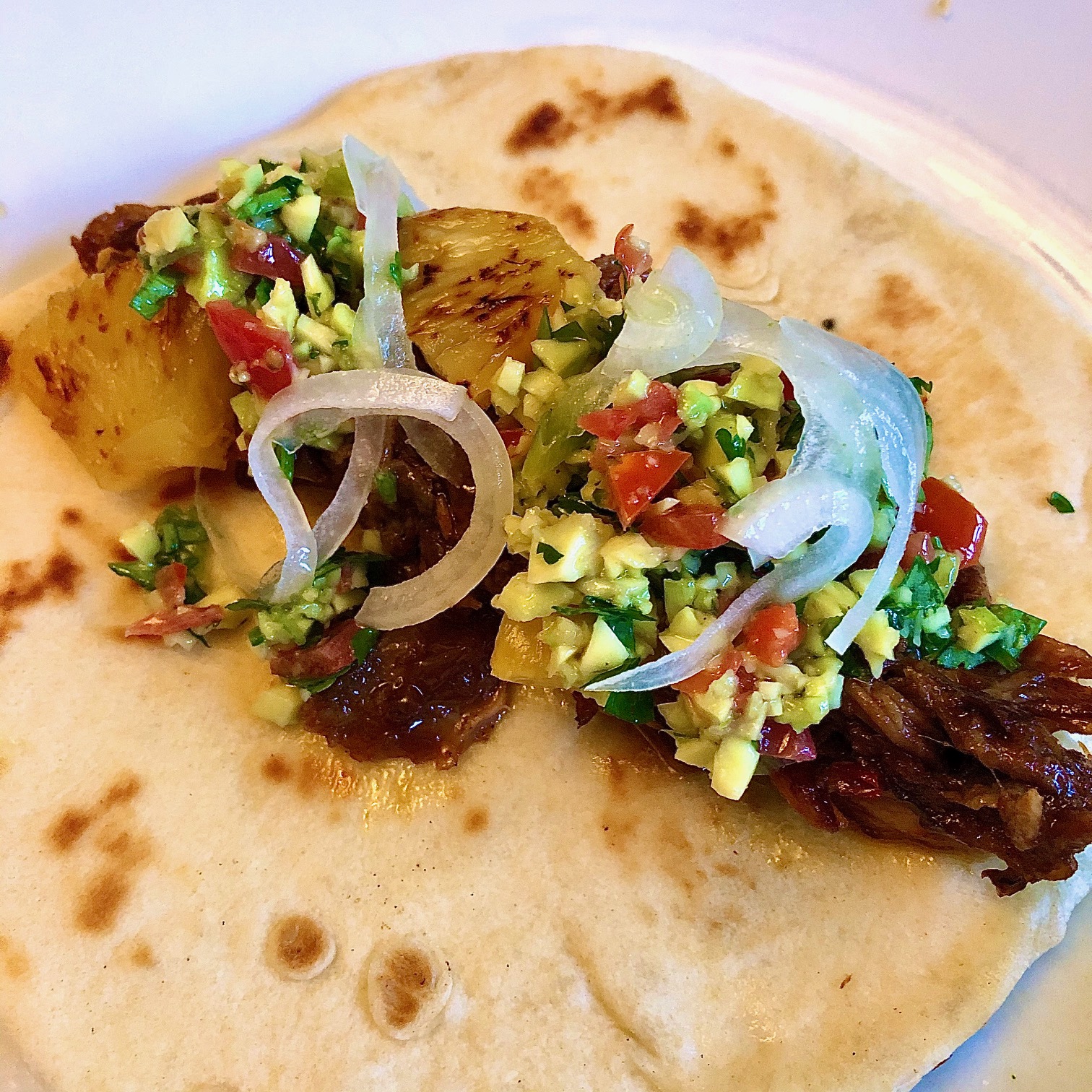 There is something immensely satisfying about slow cooking. With very little prep, you can let the oven work it’s magic and you end up with a dinner that is far more impressive than the work involved in making it.

I’ve been thinking about slow cooking some pork collar ever since I bought some from Quality Chop House butchers. However the one downside to slow cooking is that you have the oven on for hours and hours. Which is not what you need when it’s 30°C outside.

But now the weather has cooled down the oven can go back on.

This dish is based on Al Pastor tacos, which I’ve eaten at the London Bridge El Pastor restaurant.

A traditional Al Pastor taco is made with slow cooked pork shoulder. The meat is cut into strips and marinated. Then it’s layered up on a trompo, which translates as “spinning top”, and is slowly grilled as the meat is rotated on an open fire. Then it’s sliced off the trompo and layered up with onions, pineapple and salsa in tacos.

So basically it’s like a really, really good kebab.

Sadly I don’t own a trompo, or any kind of spit roasting equipment. Nor am I confident lighting and managing a barbecue. I leave that to Aidan most of the time.

So I’ll be trying to recreate some of the flavours, rather than the traditional Mexican dish.

Different recipes have different ways of marinading the pork. Some use pineapple juice, some use orange juice. I go for orange juice because El Pastor describe their slow cooked pork shoulder has been “marinated in orange, achiote and charred garlic”.

Achiote is an earthy, peppery spice that is used across Mexican and Caribbean cuisine. It’s also bright red, so can be used as a colourant as well as to add flavour.

Sadly I don’t have any of this. Nor do I have proper Mexican chillis. I make do with a mix of red and green chilis from the supermarket and mix these up with garlic, cider vinegar, paprika, cumin, coriander seeds and chipotle chilli paste. Then in goes the orange juice.

It all gets mixed together and poured over the pork. I only have a small piece, about 700g, as there’s only two of us. Into the fridge it goes for a nice long overnight marinade.

The next day the pork and the marinade go into a casserole dish along with a couple of chopped red onions. I top it up with some water so that the liquid covers about two thirds of the meat. On goes a lid and it goes into a low oven, set at 150°C. I turn the pork every hour and after about three and a half hours the meat is starting to fall apart.

I take the meat out of the marinade and wrap it up in tin foil. Using a potato masher I crush the cooked onions into the sauce and then let this bubble and reduce on the hob. Then simple pull the meat into chunks and add it back to the sauce. You can keep this warm or if you’re making it ahead of time just reheat it when you are ready to serve the tacos.

I use some leftover pineapple rings and simply let these char in a non stick frying pan.

The guacamole is a bit of a disaster as the avocado is just not quite ripe enough. I seem to have a batch of them at the moment that go from rock hard to overly ripe in an instant – without me ever getting a chance to eat them in their optimum state.

So whereas I would normally mash avocado with a fork, this time I’m chopping it as fine as I can. The guacamole still ends up looking more like a rough avocado salsa but it’s the best I can manage. Plus, it still tastes nice.

I’m back making my own tortillas for this. Traditionally these would be served with corn tortillas, but I’m sticking to the flour tortillas that I’ve made before. My tortillas are lovely but a little larger than perhaps they should have been. Never mind. More room for delicious fillings!

The final garnish to make is simple. Finely slice a white onion and season with salt. Squeeze over some fresh lime juice and let it sit for a few minutes. The acidity in the lime juice softens the onion, so it’s not as harsh a flavour when eaten.

I realise around the time of building my third taco (I had four in the end – there were no leftovers!) that I totally forgot to write down any quantities for the marinade. So sadly no recipe to go along with this dish. You would think after three months I would remember something as basic as writing down measurements. Unfortunately not.

Thankfully it’s so tasty this is definitely a dish I would make again. So I’ll have to try my best to remember how I made it. And remember to write it down this time.

But it just goes to show that a bit of experimentation in the kitchen often pays off.

Especially when you let the oven do the work for you.