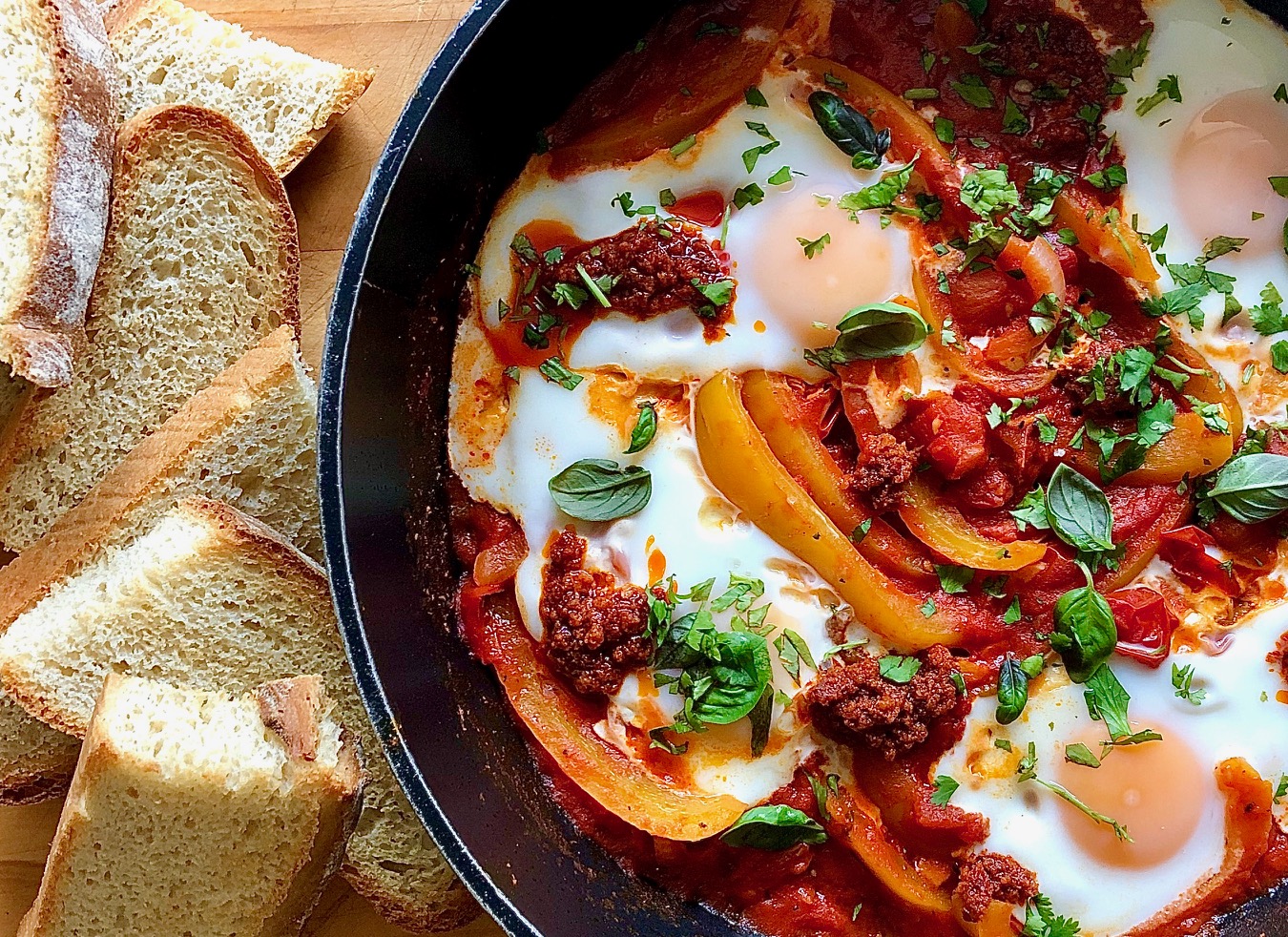 inspired by The Good Egg

After yesterday’s rather gloomy start to the day I’ve decided on two things.

First, no more looking at the news before lunchtime… bad idea.

Second, I need to start my day right, with a really good breakfast. For me that means something with eggs.

And one of my favourite breakfast dishes has to be Shakshuka. A Middle Eastern dish of eggs cooked in a spicy tomato and pepper stew.

The Good Egg have won awards for theirs, so it seems only fitting to dedicate this one to them. With restaurants in Stoke Newington and Soho they must be doing something right. They serve their Shakshuka with sourdough and preserved lemon yoghurt. Plus the optional extras of merguez sausage or halloumi. Or both.

I’m having to improvise a little with mine. I have some more Cobble Lane Cured nduja so I’m going to add that. I don’t have yoghurt (unless I spoon a single strawberry yoghurt on top but something tells me that’s not a good idea) so I skip this. No chance of preserved lemons. That’s one of those ingredients I always mean to get, but never actually buy.

If I wanted to make sourdough to go with it I wouldn’t be eating until tomorrow evening. So instead I opt for my go to Easy Bread Recipe from BBC Good Food which I can’t rate highly enough. I’ve made a few loaves now and they have all come out really well. I’ve learnt to be brave and leave the loaf in the oven for the full 30 minutes, which means a nicer crust develops.

I’m also trying out my using oil to knead the bread, rather than flouring the board and this works well. No sticking, and the loaf does seem a little lighter for it.

Making the shakshuka is really easy. Simply sweat some garlic, onions, chili and peppers. Add some paprika (I like the sweeter smoked type) and cayenne pepper and then in goes a tin of tomatoes.

Where possible, we would always go for plum tomatoes. Whole tomatoes tend to be less processed than chopped ones – which means they have a fresher flavour and keep more of their natural sweetness. Chopped tomatoes also release more water (or can even have water added, if they are very cheap) – so we think that plum tomatoes give you more flesh and far more flavour for your money.

Once the plum tomatoes are in, let the sauce bubble away for at least 10-15 minutes so it can thicken. You want to be able to make little wells for your eggs to sit in so you need the sauce to not instantly run back into gaps you make when you stir with a spoon.

I’ve found the best way to still get runny yolks is to cook this in a wide saucepan or frying pan that has a lid. Then once you have cracked in the eggs (and added dots of nduja in my case) put the lid on which will create steam and help the egg whites set more quickly. Even better if it’s a glass lid because then you can watch the eggs cooking without having to lift the lid to check on them.

As soon as they look ready sprinkle over some herbs – parsley and coriander are my favourite, but today I have basil so that gets thrown on top too- and tuck in with lots of crusty bread or toast.

This is how a day should start.

With both my mood and my vegetable consumption boosted I can now crack on (who doesn’t love an egg pun?) with the rest of my day.

I’m going out into the garden and leaving my phone inside. Maybe I can ignore the news for a little longer.

I feel my head going back into the sand. That’s better. 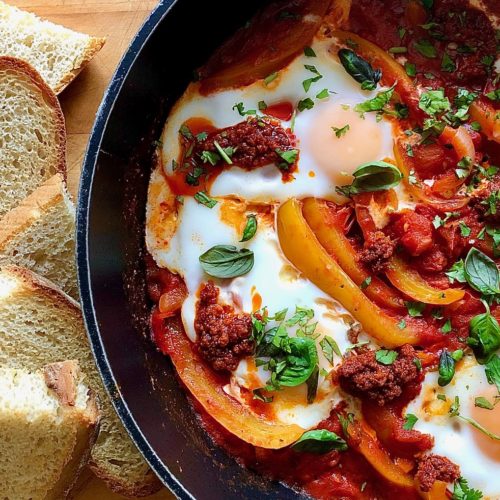