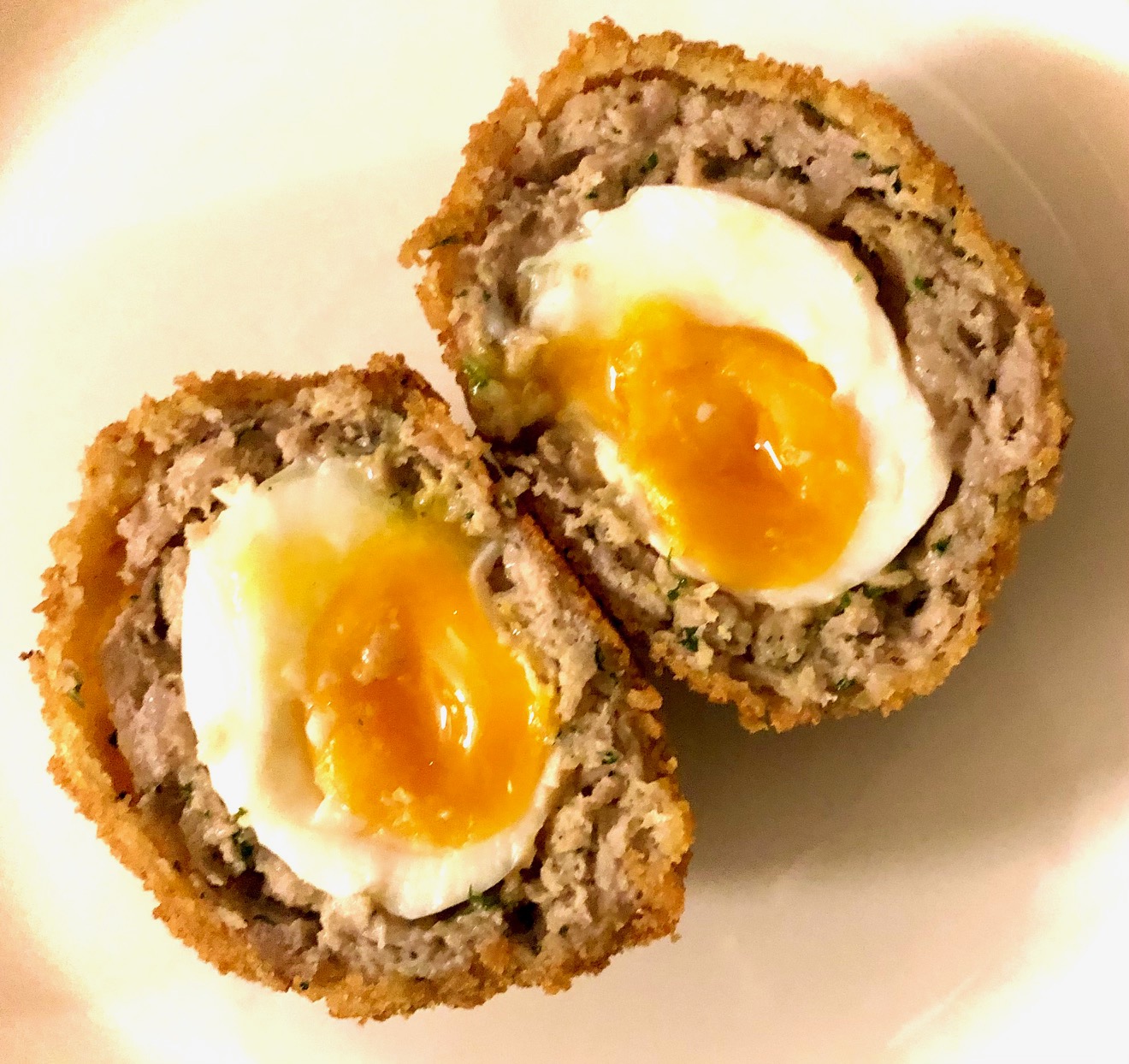 inspired by The Bull & Last

For most people this is cause for a huge sigh of relief. They can finally give up on their diets, detoxes and dry Januaries. They have been good. Now they can enjoy themselves.

Any pub usually expects more than a few people to over indulge at the start of this month. Whether it’s having one too many, after abstaining from booze for so long. Or finally giving in to that portion of chips or perhaps allowing themselves a non-slimline tonic with their gin. Crazy.

But as anyone who reads this blog will know, I don’t go in for any January detoxes.

But I am still missing the pub.

I’ve worked in pubs on and off for the best part of half my life. I’m married to a pub owner. We have a proper local that we find ourselves in a couple of times a week (in normal circumstances).

So it’s about time I dedicate a bit more love to the pubs, and the food they serve, that I miss so much. Over the next couple of weeks expect lots more posts about pub food!

But what counts as pub food?

Pretty much anything nowadays. A bag of nuts and a pickled egg, or a 10 course Michelin starred tasting menu. Both can be found in pubs across the country.

Pubs, by definition have changed over the past few decades. And change is more felt than ever right now, with the effects of Covid expected to be around for years to come.

But I don’t want to sound all doom and gloom. It doesn’t have to be all bad news.

In some ways the pandemic has helped push pubs into the future. In fact you could argue that pubs have had to become more like restaurants than ever before. And I’m not just taking about the food.

Every restaurant plans out its dining spaces to ensure two things. A good flow of service. And as many bums on seats as possible.

I’ve lost count of the number of pubs I go to where everyone crams around the bar, only to discover a hidden function room or quiet corner forgotten and unoccupied. Yes, all crowding round a bar on a Saturday night is great fun, but now we have to spread out businesses can see how all the space in their premises can be used, and improved in the future.

Prices are another thing.

In a restaurant you get given a menu. You know how much things will cost before you order something. Perhaps this is why so many people grumble “how much for a G&T?” when they order it in a pub, but would order the same (probably even more expensive) drink in a restaurant without batting an eyelid.

After a summer of table service, menus on QR codes and ordering from phone apps we, the customers, feel more in control. It doesn’t mean we spend less. It simple removes that nasty surprise of the cost of a round.

I should add the surprise is always the customers fault by the way…. alcohol and maths don’t go together very well, do they?

Plus I should mention the food shouldn’t I? Especially all those pubs who suddenly saw their food takings sky rocket when everyone had to eat a substantial meal.

Or how about those pubs that never served food before? A whole new way of working, and making money, opened up.

I would never have imagined that a scotch egg would become as political as it did back in December. Ministers and government officials getting tongue tied over whether it did, or didn’t, count as substantial enough. Could a punter just eat a scotch egg in order to have a pint (or three)?

Scotch & Co, a supplier of scotch eggs to pubs across the country saw a 25% rise in demand during December last year.

Only time will tell if customers desire for a scotch egg will remain after we reopen once more. But I for one think they should. Because nothing says pub food more than a scotch egg.

I’ve made Quail Scotch Eggs before, back in the early days of this food blog during the first lockdown. But never a full sized one.

Surely if anything that should make it easier right? Less fiddly?

Turns out peeling the eggs is just as tricky.

Apparently the fresher an egg, the harder it is to peel.

Sadly I only find that out after boiling my eggs, which must be quite fresh. They are a nightmare to peel.

So much so that chunks of the white come off as I go. I’m just hoping that they hold together. Hopefully when encased in sausage meat and breadcrumbs you won’t be able to tell.

I make my own breadcrumbs in advance from some leftover white bread.

My favourite way to make fine breadcrumbs is to tear the bread into chunks and pulse in the food processor.

Then I spread these larger crumbs out on a baking tray and put them in a very low oven (50-75°C) for an hour. Then back into the food processor which will now be able to blitz them to a finer and more even consistency.

Onto the sausage meat. I mix it with some chopped parsley, pepper and some english mustard. Once this is combined together it’s time to shape the eggs.

I roll my very delicate soft boiled eggs in flour. Then I take some of the sausage meat and roll it into a ball before flattening it into the palm of my hands (helps if you have wet hands to do this) until it’s about 1cm thick.

The egg is placed in the centre and I gently bring the sausage meat up and around the egg until it’s completely encased.

Next the meaty egg gets rolled in more flour, dipped in beaten egg and finally coated in breadcrumbs. A final dip in egg and back into the breadcrumbs a second time to make sure it is well coated and (hopefully) will have a nice crispy exterior.

A pan of vegetable oil heats up to 180°C before I lower in the eggs. This makes the temperature drop and it stays around 160°C whilst I cook. I leave them in there until lovely and golden, which takes about 6 minutes.

I just hope they’re cooked inside…

They are! Plus the eggs have held together which means there’s still a lovely, slightly runny yolk to cut into.

We sit down to eat them, with a beer of course. All that’s missing is the pub.

Even so, a scotch egg makes us feel a bit better about another night in.

Delicious and (in my book anyway) very, very substantial. 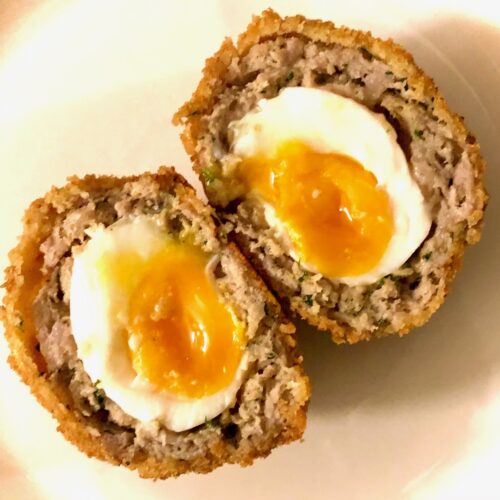