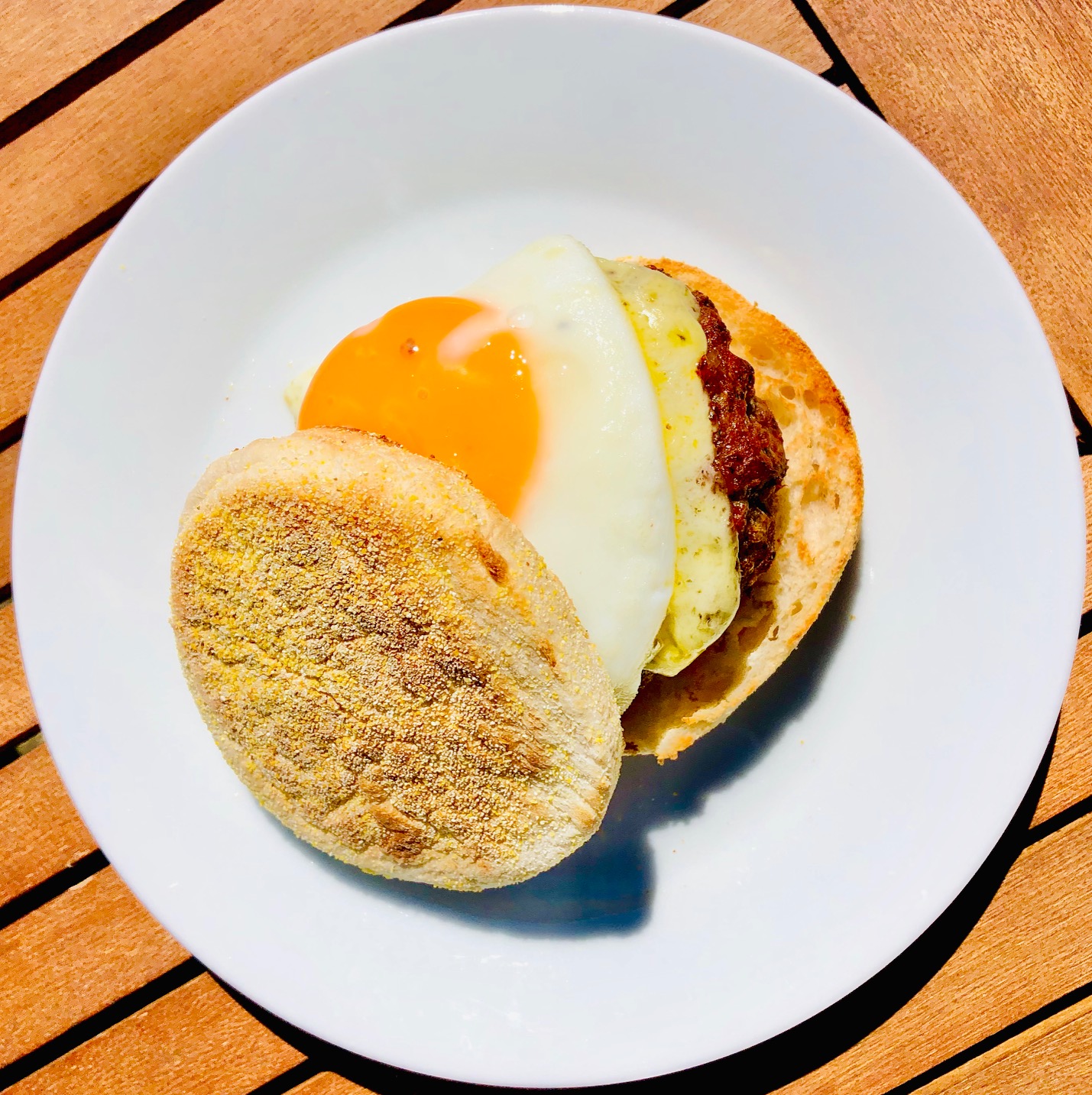 In all honesty I’ve never been that fussed about a McDonanlds breakfast. For the simple reason that I don’t really want to go in there before 10am. For me McDonalds is reserved for late at night, heading home after a night out, suddenly able to eat 20 chicken nuggets all by yourself, kind of moments. And I am partial to a Big Mac from time to time. But breakfast? Not for me thanks.

But the Hawksmoor version, the HK Muffin, now that I can get on board with!

But why, when inspired by a steak restaurant, am I not cooking steak? Not even a bit of cow in sight…

Partly it’s because Hawksmoor will do it better. Fact. No point trying. I’ll cook myself steak at home, but I don’t want the pressure of trying to emulate a restaurant.

But the real reason is this post isn’t about steak. It’s not really about Hawksmoor (sorry Hawksmoor, I love you really).

What I really want to write about is cheese.

We are all aware of how the lockdown has affected restaurants. What is less easy to see is how it’s affecting their supply chains. British cheesemakers across the country found the demand for their products almost disappeared overnight. These artisan producers don’t sell their cheeses in big supermarkets.

They mainly sell to restaurants.

It was a piece written by Jenny Linford (a London based food writer) titled British Cheese Crisis that I found on Twitter that made me realise this. I hadn’t thought about how far reaching the effects of restaurants shutting down were.

As it happens I’m reading about cheese at the moment.

“A Cheese Mongers History of the British Isles” by Ned Palmer

Don’t laugh. Aidan bought this for me as an attempt to improve my knowledge of history (which is shamefully bad, I admit). I’m not sure how much history is sinking in. But I am learning a lot about cheese.

But reading about cheese means one thing. I want to be eating a lot of cheese.

Specifically I want to be eating some of the cheese Ned talks about. So far I’ve been nibbling on a bit of supermarket cheddar when reading. It’s just not good enough.

So last week I cracked and went off to the Neals Yard website. Usually I would go to their shop in Borough Market. Cheese heaven! But a bit of time on their online shop reveals that I can order a few of the cheeses I’ve read about so far. They have a £25 minimum spend and they will deliver straight to my door. Three big chunks of cheese and I’m nearly at £25.

As someone who is unemployed for the foreseeable future should I really be spending money on cheese?

I think about it. That is less than a weeks travel in London. A weekly travel card is £42.40. And I am not travelling at all. In fact it’s been nearly six weeks (really, six?) since I got on any form of public transport. So that is a saving of £254.40.

I put another cheese in my online basket. And that cheese is Ogleshield.

Made in Somerset this cheese is unique as it is made out of only Jersey cow’s milk. But that’s not the reason I want some. The reason I want some is my Hawksmoor at Home cookbook. Which has Ogleshield in quite a few of it’s recipes. Including the HK Muffin.

So back to where this started. My breakfast. The cheese has been in the fridge for days. I have been looking forward to this.

The recipe is simple enough. Form some sausage meat into a patty and grill or pan fry. Add a generous slab of Ogleshield on top and let it melt. Pop into a toasted muffin with a fried egg and enjoy.

Perhaps not the healthiest start to the day but I’m not feeling any guilt.

Nor do I feel bad about spending money on cheese.

In fact, as Jason Hinds (Director of Neals Yard Dairy) says in their blog

“That the milk, butter, bread and cheese we sell here are more expensive than those you find in the supermarket does not make them any less essential. The difference is, you are sustaining practices like good animal welfare, regenerative agriculture.” This distinction – between ‘luxuries’ and ‘essentials you pay more for because they support a sustainable food system’ – is one that needs to be clarified, and urgently, he continues. “If you are buying eggs, veg and milk because they are cheap, you aren’t sustaining anything,” he says, “beyond corporate greed and big business.”

So from now on I’m going to try and find more British farmers, food producers and small businesses to support.

All for less than the price of a weeks travel. Bargain.