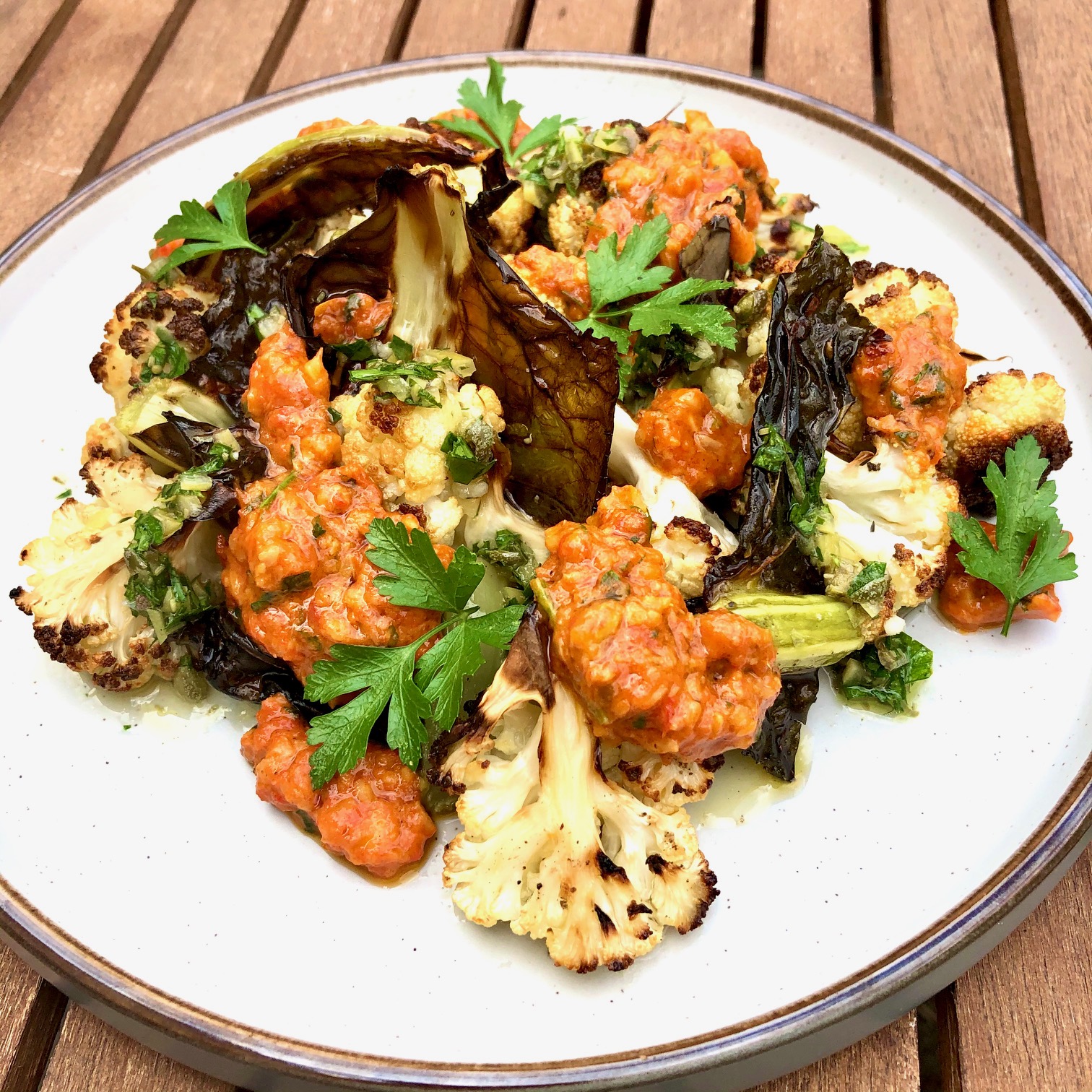 It may still look like a bit of a building site, but I can finally cook in our kitchen again!

I’ve spent the best part of a month dreaming of the first dishes I would cook, the elaborate menus I would try and replicate, in honour of a new kitchen.

But the reality is a bit different.

Because even though we had a whole weekend with a functional kitchen and no builders on site, that simply meant one thing.

We spent the weekend decorating. Not even fun, colour on the walls decorating. We spent it painting ceilings white, sanding down woodwork and putting on base coats. This meant that the oven and my lovely new hob were nearly always out of bounds. Covered in layers of dust sheets and scattered with roller trays and paint pots.

We managed to whip up a quick bolognese one evening and put some shop bought chicken kievs in the oven on the other. Not exactly a triumphant return to cooking….

So here I am on a Monday afternoon, with builders gone for the day and time to spare. Here I am with a kitchen that is empty and ready, finally, for me to cook again.

It’s still a bit of an obstacle course. I have to step over loose skirting boards and power tools to reach the fridge. But I can cope with that. What is trickier is trying to remember exactly where all my kitchen equipment has gone. Where, oh where, is my food processor?

After a desperate hunt that resembles a childhood game of hide and seek (is it in the wardrobe/under the bed/ in the airing cupboard?) I finally track it down at the bottom of the wooden chest in the living room.

Thankfully making this dish is going to seem like a doddle compared to hunting down the kit I need.

Today I’m taking inspiration from a restaurant that epitomises simplicity. I’ve realised that all my dreams for grand dinners can wait. Right now I just want some simple, honest cooking.

Like the cooking you get at 26 grains. The original Neal’s Yard restaurant was opened in 2015 by Alex Hely-Hutchinson after she ran a series of successful pop ups. The concept was simple. Very simple. Because her main offering initially, was porridge.

Branching out to brunch, lunch and eventually an evening snack menu over the years meant the natural next step was to find another site. So at the end of last year Alex opened her second restaurant, at the heart of Borough Market on Stoney Street.

There’s still her legendary porridge on offer. Plus a carefully considered menu of brunch and lunch specials. In the evening you can sit and enjoy a glass of wine with some charcuterie and other nibbles.

It’s relaxed, informal and everything looks and sounds delicious. Crucially it also sounds easy enough to have a go at making something in a half finished (or should I say half baked?) kitchen.

I’ve got a cauliflower that I need to cook thanks to my first Oddbox delivery in a month. So a scroll through the 26 Grains Instagram account and I find a perfect sounding dish to cook.

This was their menu back in June. Oh how I’ve missed this! Trawling through posts and menus until I find something I want to cook (and more importantly find something I have a decent chance of being able to cook!).

I turn on the oven. For the first time in weeks.

Unfortunately I have to quickly turn it off again. The oven, like everything else in the house, seems to be covered in a fine layer of builders dust. Quite how to dust got inside the oven, I will never know. But I can tell you there is something worse than the smell of plaster dust. The smell of plaster dust burning.

So once I’ve cleaned the oven it’s time to carry on. When it’s up to temperature in go the florets and the leaves of the cauliflower. Coated in a drizzle of olive oil and some cayenne pepper. Finally I’ve used one of my spices that I kept out for cooking without a kitchen, and haven’t touched.

Also on the shelf below goes a whole red pepper to roast for the romesco sauce.

I’ve never made romesco sauce before but it really couldn’t be simpler. Originating from the Catalan region of Spain, this is a sauce made with roasted peppers, tomatoes and nuts (usually almonds). If you don’t want to bother roasting your own peppers you can buy them jarred. But seeing as I had the oven on anyway, roasting my own seemed easy enough.

Next question is what to do about tomatoes? Some recipes roast tomatoes, some use fresh raw tomatoes, and some use tinned, or even tomato puree to make the sauce. I guess it all depends on how much time you have, and what ingredients you have available to you.

I’m definitely using fresh tomatoes, as we have them growing in the garden. I would try roasting them, but that would involve finding another oven tray, which for all I know is in the garden shed, or the attic, or some equally impossible to reach place. So I’m sticking to raw for now.

After about 20 minutes I notice the cauliflower leaves are pretty crisp (burnt) already so I take them out and return the florets to the oven, making a mental note that next time it would be better to wait and add the leaves later on.

Once the pepper is charred on the outside and soft I take it out and put it in a bowl covered in some cling film to cool. Once it’s no longer too hot to handle I peel away the burnt skin, tear it open and remove the seeds.

The pepper, tomatoes (I didn’t bother removing skins or seeds from these), almonds, parsley, garlic, olive oil and sherry vinegar all go into the food processor and blitzed until smooth. That’s it, the sauce is ready.

I remove the cauliflower from the oven and turn it off. But I put a tray of whole almonds in to roast slightly in the residual heat.

All that’s left to do now is make a dressing with the preserved lemons, olive oil, capers and more parsley.

I plate up the charred cauliflower and the crispy leaves, which might look burnt but taste amazing! I spoon over generous dollops of romesco, scatter over almonds and lots of whole parsley leaves and then finish with the dressing.

Simple and delicious. The perfect tribute to 26 Grains and their ethos of fuss free cooking using lovely ingredients.

We still don’t have furniture back in the kitchen so I head outside to tuck into my lunch at the garden table. Homecooked food for lunch. Nothing beats this.

Well…. almost nothing. After I’ve eaten I go to clear up the kitchen. Taking my plates, food processor bowl and roasting tin… and putting them all in our brand new dishwasher. I have never owned a dishwasher before!

I have to admit I’m not sure how I’m going to sign off posts from now on. Usually a joke about the washing up is my go to ending.

I’ll have to have a think… leave it with me. 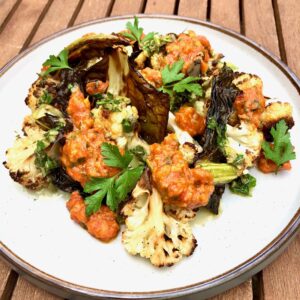