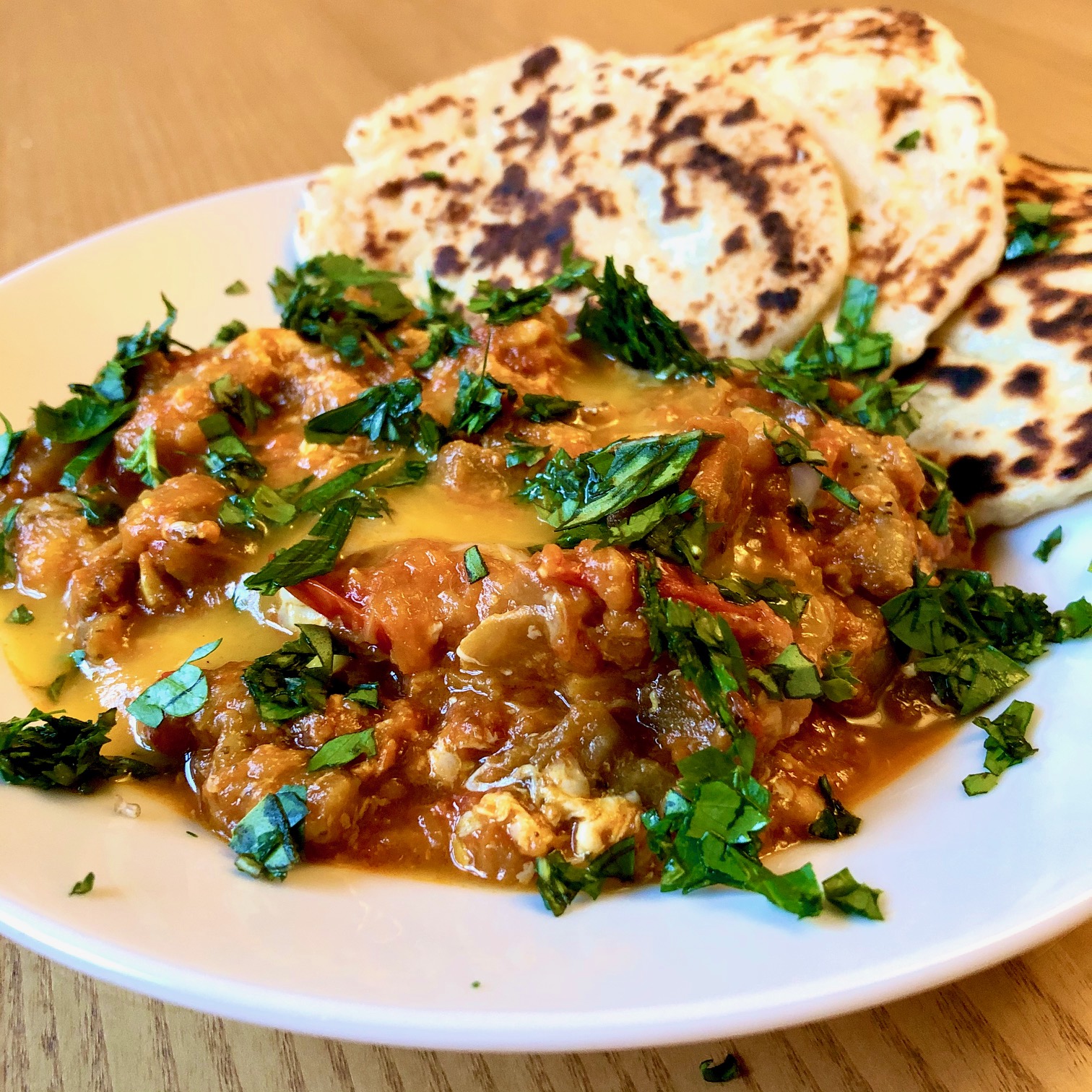 It’s now over three weeks since I’ve cooked in my kitchen. Simply because at the moment I have no kitchen. Unless you count a microwave and a toaster balanced on a rickety table in the garage. Which I don’t.

But as building work starts to come to an end I’m excited about being able to get back to what I love. Which is anything, and everything, to do with preparing and eating food.

When I was packing up the kitchen a few weeks ago I kept some essential bits and bobs accessible. Thinking that I wouldn’t let the lack of kitchen stop me from cooking. I was determined.

So for three weeks bottles of oils, vinegars and sauces have stayed out. Gathering dust. And we are not just talking about a gentle layer of dust from the passing of time. Oh no. They are caked in a thick layer of dust from demolition and plaster and carpentry.

I can barely tell which of my essential spice jars is which any more, the labels are so obscured from all the grime and building debris. Could be paprika, could be cayenne. I’m not sure.

It doesn’t matter though. As I have to admit I haven’t used any of them.

I’ve used some olive oil and balsamic to dress a bit of lettuce. But other than one overly optimistic attempt to make a Thai noodle salad on a building site (tasted nice, but was not worth the effort!) I gave up on the idea of actually trying to cook.

Another thing that I was adamant I was going to do was barbecue all the time. Not just chucking on a few supermarket burgers – actually learn how to cook all sorts of different things. I was going to master the fire and become a sort of wizard with charcoal in the absence of any other method of cooking.

But this didn’t happen either.

So I’ve been living off ready meals and things from the freezer for the past few weeks. And toast. I have eaten a lot of toast.

Partly to blame is the weather turning almost as soon as the kitchen got demolished. I should have predicted that. The cooler, wetter weather coupled with the fact that are patio has turned into a sort of make shift builders yard means that I’ve only got the barbecue going once in the past few weeks.

And I was so tired it was just for some supermarket burgers.

So today I’m thinking back to the last time we barbecued properly. When we also still had a kitchen.

There’s something about barbecuing that encourages a sense of ritual. The acts of setting it up, lighting it, managing the fire and cooking the food. It definitely seems like more of an event than simply turning on an oven (until you don’t have one anyway…)

Maybe that’s why the food choices seem to become part of the ritual too? Perhaps that explains why when barbecuing we often go back to the same ingredients and methods?

Marinading something, for example, is a barbecue ritual. All too often when a recipe calls for ingredients to be mixed together and left overnight, I forget and end up giving them a quick hour or so together before having to get on with the cooking.

But when it’s a barbecue suddenly I want to marinade everything. Meat and vegetables alike will get smothered in a mix of sauces and spices before taking up every available inch of space in the fridge for hours, or sometimes days on end.

Corn on the cob is another ritual for us. Probably Aidan’s favourite vegetable. Always cooked first, covered in butter and then eaten as we watch the other components of our dinner cook. A sort of barbecue starter.

A more recent addition to the barbecue ritual is my favourite of all. Roasting aubergines in the coals. Once the rest of the cooking is done, simply put them in amongst the smouldering grey coals and leave them. Sometimes 40 minutes. Sometimes an hour. Until they’re charred on the outside and squishy in the middle.

Then into a bowl, covered and left to cool. Waiting for me to do something interesting with it the next day.

But on this particular day, when I had some time on my hands (and more importantly, a functional kitchen) I wondered what else I could use this smokey aubergine for.

Off I go to google “smoky aubergine dish”. This is what I have missed the past few weeks. Not just the actual cooking, but all the prep, research and shopping that goes with making a meal. I basically have had no reason to spend two hours trying to figure out what to do with some barbecued vegetables.

It’s no coincidence that I’ve got a lot done over the past few weeks.

But back to my pre-building work googling. I discover a dish called Mirza Ghasemi. It’s an Iranian dish of smoked aubergine, tomato and egg.

I’m instantly intrigued and want to try it. The one slight hitch in the plan is that I have hardly any experience of Iranian food. I’ve eaten in a Persian restaurant once, where I had some delicious baked chicken and rice. But I couldn’t tell you much else about it. I can’t really even remember what the chicken tasted like. I just remember what it looked like.

So it’s fair to say I have no idea what I’m doing. I just like the sound of this dish. Plus I’m feeling lazy and I have eggs and tomatoes in the house already, so no need for a supermarket trip.

A bit more research and I discover a London food blogger called Hami. Orginally from Iran, Hami focuses on sharing tradition recipes from his mother. I guess that is pretty obvious seeing as his blog is called I Got It From My Maman.

So with the ingredients I need and a recipe to follow I’m missing just one thing.

A restaurant to link it to.

The group includes Bao, Trishna, Brigadiers, Hoppers, Sabor, Gymkhana, Flor, Lyles…. and they are just the ones I know.

Since the end of 2018 they also have a Persian restaurant in their portfolio. Run by Chef-Founder Kian Samyani, who has been influenced by the kabab houses of Tehran to create a menu that takes traditional Iranian dishes and mixes them with seasonal British produce.

And on their menu is this…

Now I don’t have any Cacklebean eggs (that come from a rare breed of white chicken apparently) but I’m fairly confident any egg will do. As long as it’s free range, obviously.

I follow Hami’s recipe pretty closely. I start by frying chopped garlic in butter and then adding chopped fresh tomatoes and some tomato puree. A generous sprinkle of turmeric and then leave it to cook.

Half an hour later chop up and add the aubergine, and a bit of smoked paprika and them leave it for another 30 minutes.

I love Hami’s tip about cracking in two eggs and then mixing in the white, but trying to leave the yolks whole. This means you get some delicious runny yolk to mop up with the auberinge.

I made some super simple flatbreads to go with this dish. Just self raising flour and natural yoghurt mixed together, left to sit for half an hour and then rolled out and quickly grilled on both sides.

Berenjak have an an amazing sounding bread called Taftoon but that’s one to make another day. I’m too hungry to consider complicated baking.

I plated up the Mirza Ghasemi and sprinkled with some fresh herbs from the garden. Mainly parsley but a little basil and mint too. Why not?

I’ll definitely be making this again. With the addition of the tomatoes and egg it feels like a complete lunch, rather than just a dip. But I could also see it served as part of a glorious spread of different dishes to dip bread into, for a whole table to share. I’ll do that next time, when I attempt to make Taftoon bread too.

No sharing for me today though. I eat this all by myself.

Not long now, I keep telling myself. I should be back in my kitchen by the weekend. Although unless it warms up I doubt I’ll be barbecuing more aubergines anytime soon.

I’m hoping next time I eat this I can actually try it at Berenjak. As well as their A La Carte Menu they are offering a Bottomless Kabab menu after 9.30pm in September, and have food delivery, meal kits and deli items all available on their website.

Another brilliant example of the lengths restaurants are going to in order to survive right now.

I feel like after weeks of toast and microwave dinners I’ve also been in a kind of survival mode. But at least I know I’ll be back in my kitchen before too long.

By now the majority of chefs are back in their kitchens. But still not all of them. And many still have far fewer diners than normal.

For restaurants getting back into the kitchen isn’t the end of the battle. It’s only the beginning.