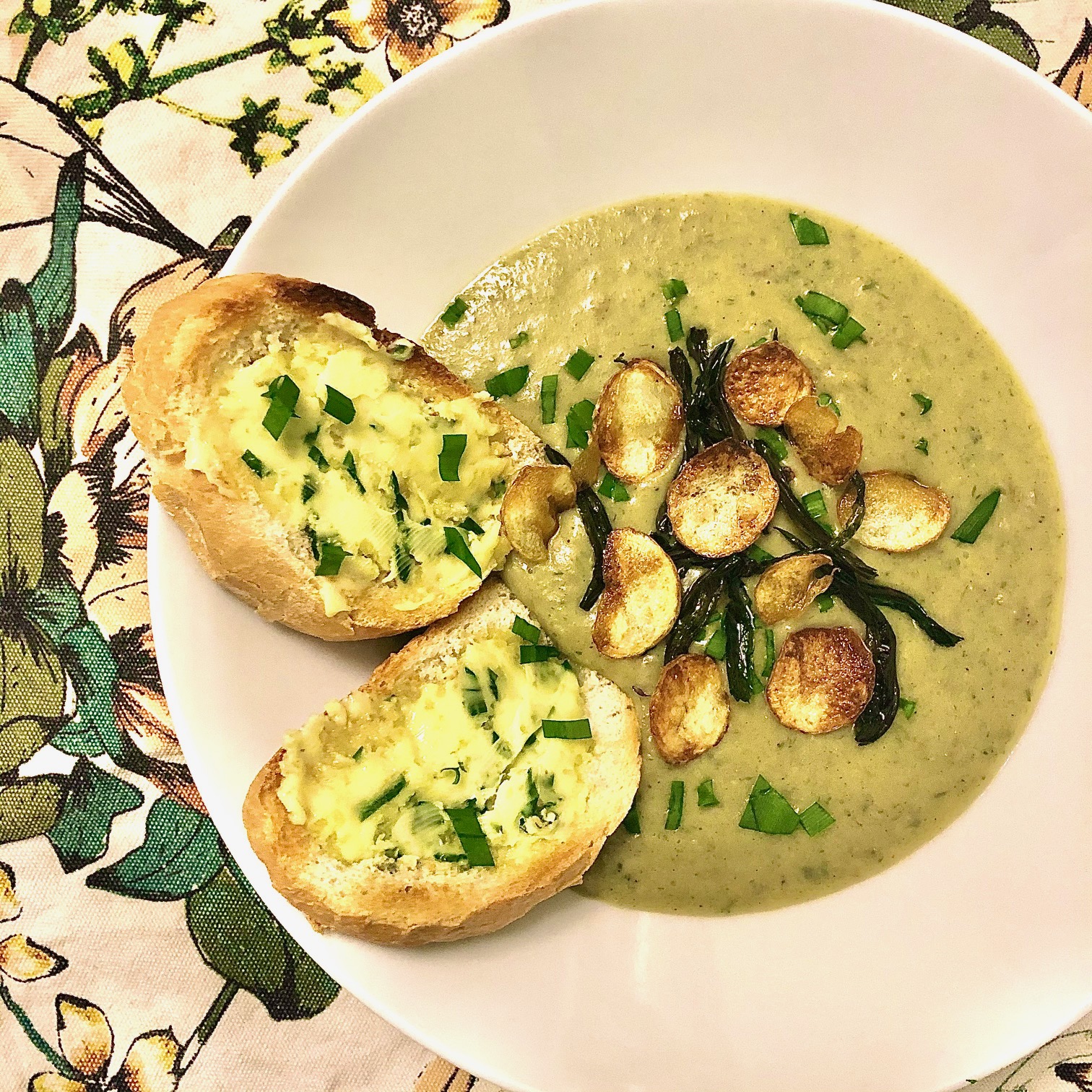 inspired by The Pig Hotel

I’ve always wanted to go to one of The Pig Hotels. I don’t really even mind which one. I just think they look amazing. Beautiful rooms, lovely countryside settings, and of course, delicious food.

As much as The Pig Hotel does make a leek and potato soup, my attempt is as much inspired by their cooking ethos as their menu. They source as many of the ingredients for their dishes as possible from within 25 miles of where they are. Which is an incredible way to champion local produce.

They even have what they call “zero mile dishes” where the ingredients come directly from their kitchen gardens.

So that’s what this soup is. A zero mile soup. Potatoes and leeks from our very own veg patch. Plus it’s that time of year again. Three cornered leeks are springing up all over the garden. We must have dug up thousands of their bulbs during lockdown earlier this year. Literally thousands. And yet here they still are. Thank goodness they’re tasty.

The charity Only A Pavement Away focuses on training and finding work in the hospitality industry for those who have been homeless, are ex offenders or vulnerable veterans. They strive to get people’s lives back on track by offering employment in a sector that was, until this year anyway, expanding.

The competition is simple. I need to create a soup using no more than five ingredients. Donate to the charity, share the recipe online and then I’m in with a chance of winning. Judged by Tom Aikens, the winner gets tickets to a charity lunch and have their soup served as part of the menu.

No more than five ingredients.

But what counts as an ingredient I wonder? Does olive oil count? How about stock? Could salt and pepper use up two of my precious five?

Seasonings, butter and olive oil are all exempt. But stock counts.

Well, I think, that just means I’ll make my own. I’m not using up one of my five ingredient slots on something that could be made out of my other ingredients.

You see, you need to understand that I really, really like rules. Always have done. Some people see rules and want to challenge them. Question them or break out from their constraints. I, on the other hand, love the structure of rules. As a child I didn’t like to break rules. I was a total goody two shoes if I’m honest. Even as an adult I find rule breaking terrifying rather than exhilarating.

Give me a set of rules and I will challenge myself to do the best I can to stick to them. So if I have only five ingredients, they are going to be the five hardest working ingredients. There will be multiple elements and processes. There will be time and love spent on getting the best out of them.

Yes, I have officially turned into some sort of competitive soup maker.

What makes this all slightly more ridiculous than it already sounds, is that I’m literally making a single bowl of soup.

You see normally soup is something I make in massive batches, to use up leftovers and keep in the freezer. I currently have at least three different varieties of soup in my freezer. Vegetable, chicken and one that is just helpfully labelled “soup”.

So no more soup for the freezer. This is soup simply for me to have for lunch. That’s it. One portion of soup.

I suppose this is one of the benefits of growing your own veg. You don’t need to buy massive bags and multipacks of veg from the supermarkets just to make one bowl of soup. No, you can simply use a couple of small leeks (because my homegrown leeks are really quite small – sort of large spring onions really) and a handful of potatoes.

I consider using onions, but I don’t have any from the garden. This is also meant to be a “zero mile” soup (because one set of rules is not enough right now!)

The answer is staring me in the face as I look out into the garden. Three cornered leeks. Perfect. Their mild oniony garlic flavour will go perfectly with my leek and potatoes.

Only two places left. I google leek and potato soup.

Most recipes seems to have some kind of dairy, either milk or cream, added to give richness. I’ve got milk in the fridge. It’s not zero mile milk. I do not have a cow in the garden. So I guess that’s not sticking to the rules. But it’s not a main ingredient so I let myself off the hook (reluctantly).

Finally I opt for smoked garlic. I still have half a bulb left that I bought from a grocers in Bermondsey last week. Again, not from my garden, but as soon as I decided I was using milk I knew I simply had to infuse it with the smoked garlic.

First question is how to make the stock? I trim all the rough green leaves off the leeks. These would otherwise go to waste, so these are a natural stock base. I roast them in the oven for 20 minutes, hoping this will intensify the flavour. I melt butter in a pan and add a big handful of three cornered leeks. Once the oven roasted leeks are starting to char I add them to the pan and top up with boiling water. I let this simmer for half an hour.

Whilst the oven is on I roast all except one of my smoked garlic cloves. Once really soft I squeeze them out of their skins and add them to some milk. I heat the milk until almost boiling, remove from the hob and leave to infuse.

Next I chop up potatoes, the white parts of the leeks and more three cornered leeks and sweat them in butter. I pop a piece of baking parchment over them and put the lid of the pan – so they start to steam as they cook.

I strain the stock into a jug, using the back of a wooden spoon to push out as much liquid from the leeks as possible. After removing the parchment I add the stock to the vegetables and cook until the potatoes are soft.

Into the blender it goes, until smooth. Back in the pan it goes with the garlic infused milk. Now I just need to keep it warm whilst I faff around with a few garnishes.

I slice a small potato into fine discs and pick a few more three cornered leek leaves. I heat some oil in a small frying pan and fry them all until crispy.

The remaining smoked garlic clove gets crushed and mixed into some butter with some more three cornered leeks and salt. I know bread isn’t on my ingredient list, but in my book there is simply no point having a bowl of soup unless you have some bread to dunk into it.

So there you have it. A lovely bowl of soup, with crispy garnishes and bread topped with amazing flavoured butter.

This might be a solo lunch. It may only have five ingredients. But my God I have trashed the kitchen.

I look at the blender, the sink piled with pots, pans, jugs, sieves, bowls… I’ve discovered there’s a reason you make soup in batches.

I admit things might have got slightly out of hand. Perhaps any normal person wouldn’t competitively try and make the most complicated leek and potato soup they possibly could. Other than milking my own cow, I struggle to see how it could have been any more effort.

But knowing I have stuck to the five ingredient rule? For me that is the most comforting, the most satisfying thing of all. 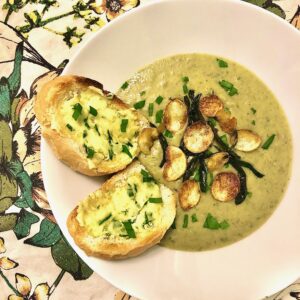