Lasagne of Crab with Beurre Nantais 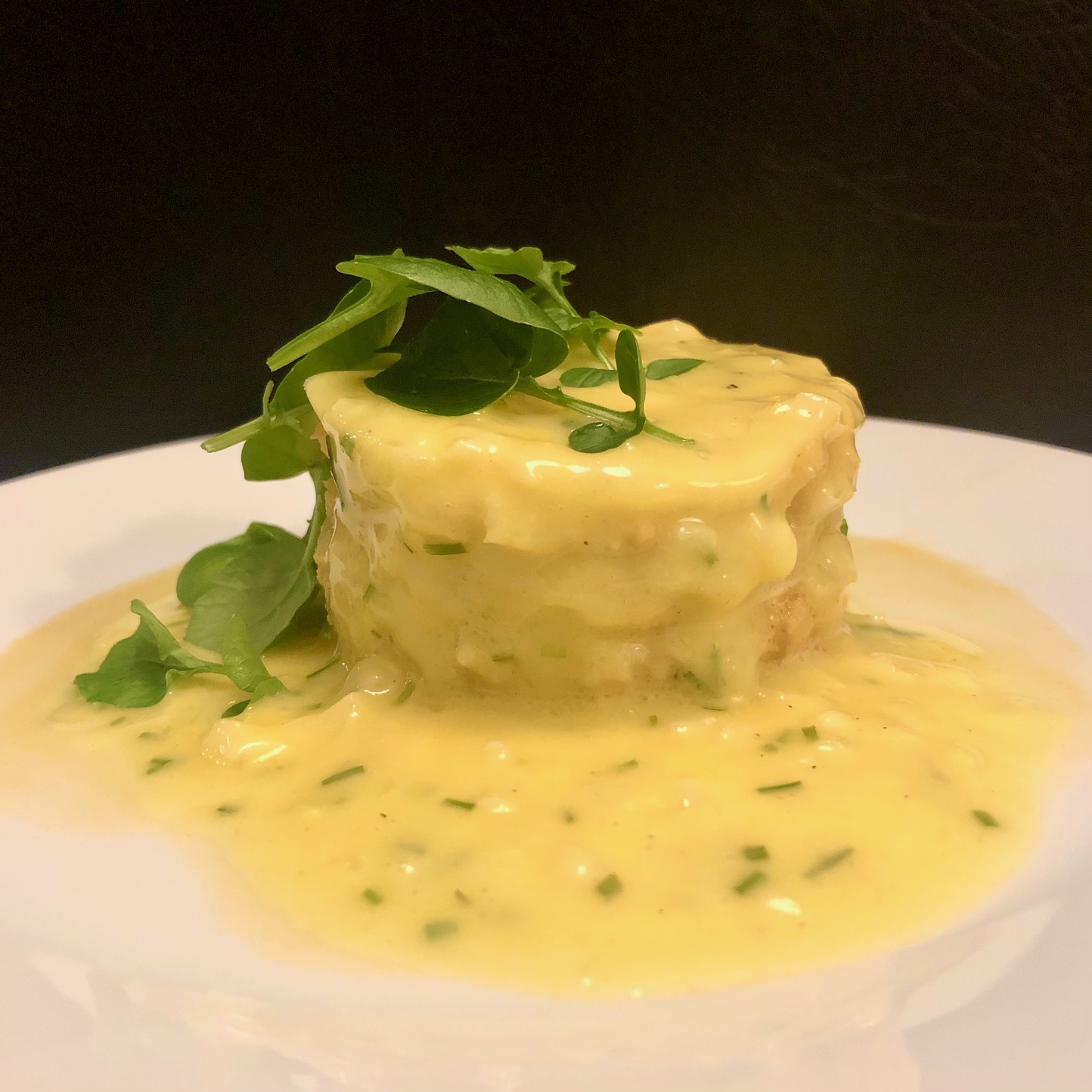 It’s time for the fish course in my fantasy seven course menu.

I had to think long and hard about this course. Part of me felt like a fish course, part of me thought I should just carry on with the Italian theme (after arancini and burrata earlier this week) and have pasta.

But in the end the answer was obvious. Combine fish and pasta.

No need to pick one when you can have both.

It was also inevitable that at some point during this week I was going to attempt something fancy. Something inspired by a place with a Michelin star perhaps.

Sadly my kitchen isn’t quite the same exquisite surrounding as their dining room (I mean, just look at it!).

But I’m going to have a go at one of their dishes.

If, unlike me, you are not foolish enough to try and replicate Michelin starred food yourself, you can order it for delivery from Galvin At Home if you live within the M25.

What I’ve learnt, from my very limited experience of trying to cook food from Michelin starred restaurants, is that the following three things will happen.

One. This course will probably create more washing up than all the others combined.

Two. It will involve butter. Lots of butter.

Three. It will most likely be a disaster.

I’m back to the wonderful Great British Chefs website to get the actual recipe used by Chris and Jeff Galvin. Compared to some of the recipes on this website, it doesn’t seem too complicated….

I mean, I’ve actually heard of all the ingredients on this list.

Which is a start.

Even better is I actually manage to find most of them.

I have to settle for frozen scallops as no where near me sells fresh ones. I’m not sure purchasing fancy seafood is a permissible excuse for travel, and predictably all the usual online sites are backed up with orders as people do their panicked lockdown food shop.

So frozen will have to do.

But as the recipe says to get the food processor bowl really cold in the freezer before using it to blitz the scallops, the fact that my scallops are starting out a little colder than needed isn’t necessarily a bad thing.

I mean, there is no way on earth that I’m going to fit a food processor bowl in my constantly stuffed freezer. So instead I let the scallops just about defrost, and blitz them when they still feel pretty chilly.

I should mention that I’ve already made the pasta dough.

I completely ignore how they make the dough, sticking with the way I usually make it. The recipe would have you make the dough in the food processor.

But then I would have to wash it up before I blitz the scallops (you see what I mean about extra washing up?)

So I make mine on the counter, cracking an egg into the middle of some flour and mixing. Adding a splash of olive oil, kneading for a couple of minutes and then into the fridge to rest.

Although I do listen to the Galvin brothers about the way to treat the pasta dough. I am meant to be doing their recipe after all.

So the dough rests in the fridge for over and hour, and then gets another 30 minutes warming up on the side before I roll it. I blanch each pasta sheet in boiling water, dunk it in ice water and then drain.

What you end up with is a rather sticky, semi cooked pasta sheets. I use cookie cutters in two sizes of circles to cut them out. They go back into the fridge.

Why two sizes of pasta circles? Am I deviating from the recipe again?

You see I don’t have a set of equal sized ring moulds. So any time a recipe calls for a ring mould I just use my metal cookie cutters.

Only problem is they are all different sizes.

I’m pretty sure I can guess who will win.

Back to the lasagne.

Once I’ve blitzed the scallops with some double cream I add cayenne pepper and salt and then blitz again, with even more cream. I scale the cream down slightly, but even so its more of a scallop flavoured cream than a creamy scallop mix.

Now I fold in the crab meat. Again I’m straying from the recipe as Sainsburys only had the 50/50 crab meat, so I’m using a mix of white and brown meat.

At Galvin La Chapelle they use only white meat, so I guess my lasagne might end up a little darker than theirs.

I also don’t have a piping bag so I just pop the crab mousse in a bowl, ready to be spooned into the moulds.

And you know what? It actually is fine.

I place a pasta disc in the bottom of each metal ring, then add a layer of the crab and scallop mousse. More pasta, more mousse and then topped with a final circle of the pasta dough.

Into the fridge to chill.

Now onto the sauce. Beurre Nantais.

I’ve never heard of this but my guess is it involves butter.

Turns out it definitely does involve butter.

It also happens to have originally been made by accident…

History says that a chef Clémence from Nantes one day forgot to add eggs to the béarnaise sauce that would accompany the shad he was going to serve to his master, the Marquis de Goulaine. Later, when he opened his restaurant near Nantes, he kept the eggless butter sauce on the menu, and it was here that Mère MIchel learned its secrets, taking it to her famous restaurant on rue Rennequin in Paris.

The idea of this fancy sauce basically being made by mistake fills me with a little more confidence. Even great chefs don’t always get it right.

Maybe there is hope from my decidedly amateur attempts at cookery still.

So far I’ve been scaling down the ingredients as I go, as this recipe serves 10 people and we are only two. But with the sauce recipe only calling for one shallot, 25ml of cream and so on it seems silly to cut it down.

So I chop and entire shallot and then gently fry it.

Then I realise I’ve slightly misread the recipe. What I thought said 20g of butter, actually says 200g of butter!

There is no way I’m using the bast part of an entire pack of butter for a sauce.

So most of the shallot gets scraped into the food waste bin and I carry on, stirring my few remaining bits of shallot and trying to scale down measurements as much as I can.

But when you are talking about 5ml of cream or 10ml of water, I have to admit that I may not have been entirely accurate….

So with a bit of this and a bit of that I end up with a very delicious sauce. Which is would be wouldn’t it? It’s basically 99% butter.

I add some chives.

I steam the lasagnes in a couple of bamboo steamers on the hob for 12 minutes.

Then the tricky bit. Getting them out of the rings.

Well, the top layer of pasta is basically out of the rings anyway, and a little of the filling has leaked out the bottom. But that still leaves most of the lasagnes to get out.

Running a knife around the edge I gently push them out. This involves pushing the top layer of pasta back in first though.

They come out pretty much in one piece. The odd bit of mousse left in the rings but all in all I reckon that’s as good as I could have hoped for.

So I take my ridiculous creamy crab mousse lasagne and pour over my ridiculously buttery sauce. I top with some land cress from Oddbox.

I don’t have the chervil the recipe asks for, but thankfully the cress provides a very welcome pepperiness to what would have otherwise been a dish too rich for me.

Maybe the problem isn’t the dish at all? Maybe it’s the surroundings?

A dish this decadent would sit perfectly in the the grand dining room of Galvin La Chapelle. With the smart waiters and the sommeliers and the crisp white table cloths.

Eating it in my kitchen, surrounded by the piles of washing up (told you), with quite a lot of butter sauce spilled down my jumper is hardly a fair comparison.

Do I still believe that everything is better with butter? Absolutely.

Just some things are also better when someone else cooks them. When you sit in someone else’s (far fancier) dining room.

And you don’t have to do the washing up.

At least it wasn’t a disaster.