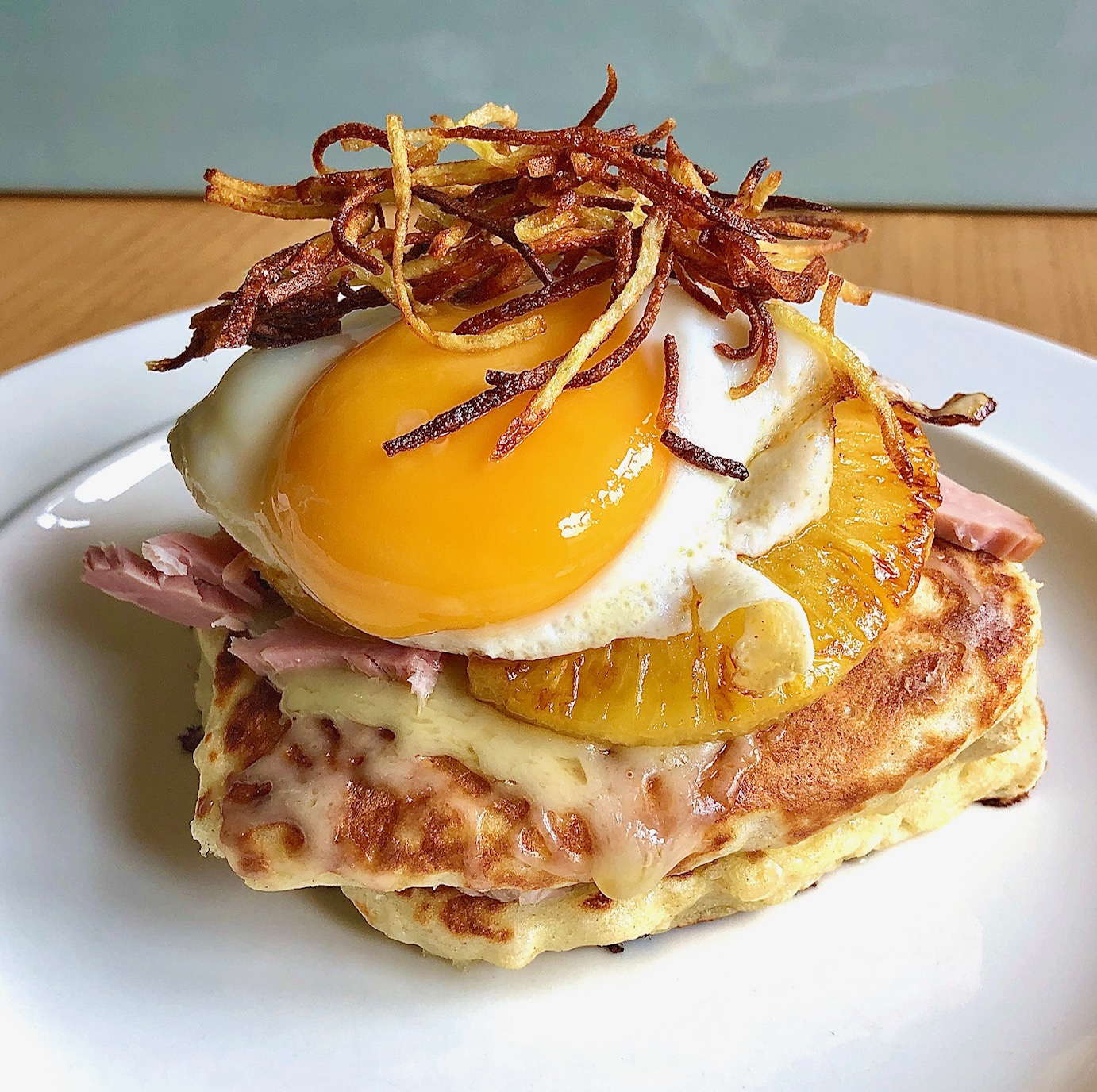 inspired by The Breakfast Club

This dish might be named after ham, egg and chips. But the reason I knew I had to cook it when I saw a picture of this dish is because of another classic combo. Cheese and pineapple.

I love cheese and pineapple.

A staple at any children’s party buffet when I was growing up. As far as I’m concerned the more plastic the cheddar (because it does have to be cheddar right?) and the more tinned the pineapple the better.

This is nostalgia on a cocktail stick.

Last December when I was helping out at one of Aidan’s pubs, waitressing for all of the big Christmas parties, I served a lot of cheese and pineapple. The pub was running a 70s theme Christmas menu.

I designed menus with disco balls and Saturday Night Fever dancers on them. We decked out the pub in the tackiest decorations we could find. I hung mirror balls behind the bar. 70s music was pumping out of the sound system. With added festive tunes of course.

But still, time and time again, I got bemused looks from a diner as I put foil covered potato studded with cheese and pineapple cocktail sticks down in front of them. As retro an amuse bouche as you can get.

Sadly, it seems, not all the customers understood it was a seventies themed menu. Even though they must have all seen it (they had preordered). It just goes to show that one Christmas lunch just blends into another. Plus chicken kievs and prawn cocktails are fashionable again now, so maybe they couldn’t tell the difference.

Even with the music, the decor, and the slightly pissed off waitress wearing mirrorball head boppers (not by choice), some punters just still didn’t get it.

A few retro cocktails, a bottle of wine and a round of shots later, everyone got into the 70s party spirit. The garish wigs, gold plastic medallions and colourful sunglasses came out so that drunk revellers could dress up and join in with the theme.

I reckon a whole load of city workers woke up the next day with a splitting headache and absolutely no idea why there was a video on their phone of them in a pink glitter wig singing “Dancing Queen”. Hadn’t they just gone out for Christmas lunch?

You know what. Themed or not. I’ve worked a lot of corporate Christmas parties over the years. They all end up like that. One way or another.

But even this, rather odd, few weeks of my life couldn’t dampen my enthusiasm for cheese and pineapple.

I am one of those people that loves a Hawaiian pizza. I don’t care that it’s “not authentic”. I really don’t care how many Italian grandfathers of pizza might be turning in their graves. It tastes amazing.

To be honest I can even take or leave the ham. I did for nearly a decade when I didn’t eat meat. My Domino’s pizza order as a student was often a Margherita with extra cheese and a double helping of pineapple.

Don’t get me wrong, I would never walk into a pizzeria in Naples and ask for pineapple. In fact, pineapple doesn’t belong on any pizza that is super thin, cooked in a proper wood oven, or has any other mark of exceptional quality.

But if I’m ordering a pizza from anywhere that offers a stuffed crust, a BBQ sauce or a garlic dip then ordering pineapple is fair game.

I wish I could say that I had eaten this epic looking stack at The Breakfast Club.

But, alas, I have never even eaten at one of their branches.

Not for lack of trying.

I’ve walked past, staring in dismay at the queues many times.

I’ve even joined them on a couple of occasions.

But living in London means you’re spoilt for choice on brunch spots.

So in the end I’ve always found somewhere else, with smaller queues and fewer people taking pictures on their phones.

They are doing collection from their sites and home delivery via Deliveroo. Sadly I don’t live near enough for either of these options. Plus this dish isn’t on their takeaway menu anyway.

So I’m recreating it at home. Because it’s Saturday. And because I love cheese and pineapple.

It shouldn’t be too tricky. I’ve made a few batches of buttermilk pancakes so far, and they have always come out OK. I’m sticking with the Bigger Bolder Baking recipe that I’ve used before. The only tweak is I leave out the vanilla extract this time. It feels a bit more appropriate for a savoury dish.

Once the pancake batter is made and resting in the fridge I turn my attention to the garnishes.

First of all the shoestring fries. I slice a potato into tiny, tiny matchsticks and then sprinkle over some salt. Leave for a few minutes and then pat they dry with kitchen paper. I heat some oil in a pan and, once hot, fry them until golden and crispy. Back onto more kitchen paper until the rest is ready.

I use a couple of pineapple rings from a tin and cook them in butter until lightly golden.

I cheat and decide to just use some nice thick cut smoked ham that I have in the fridge. Cooking and shredding a ham hock seems like too much effort for breakfast.

Once the pancakes are in pan cooking I melt some butter in a smaller frying pan to fry the egg.

Once the pancakes are cooked on one side I flip them over and add grated cheese on top, to melt whilst the other side cooks.

Now to assemble. A cheesy pancake, then some ham. Then the other pancake and more ham. On go the pineapple rings, the fried egg gets balanced on top and it’s all finished with a tangle of shoe string fries.

Yum! This is a seriously good start to the day.

I wonder if I would have been as happy with just cheese and pineapple pancakes?

No, this is definitely better.

Which makes me think one thing. Maybe next time I should have an egg on my pizza.