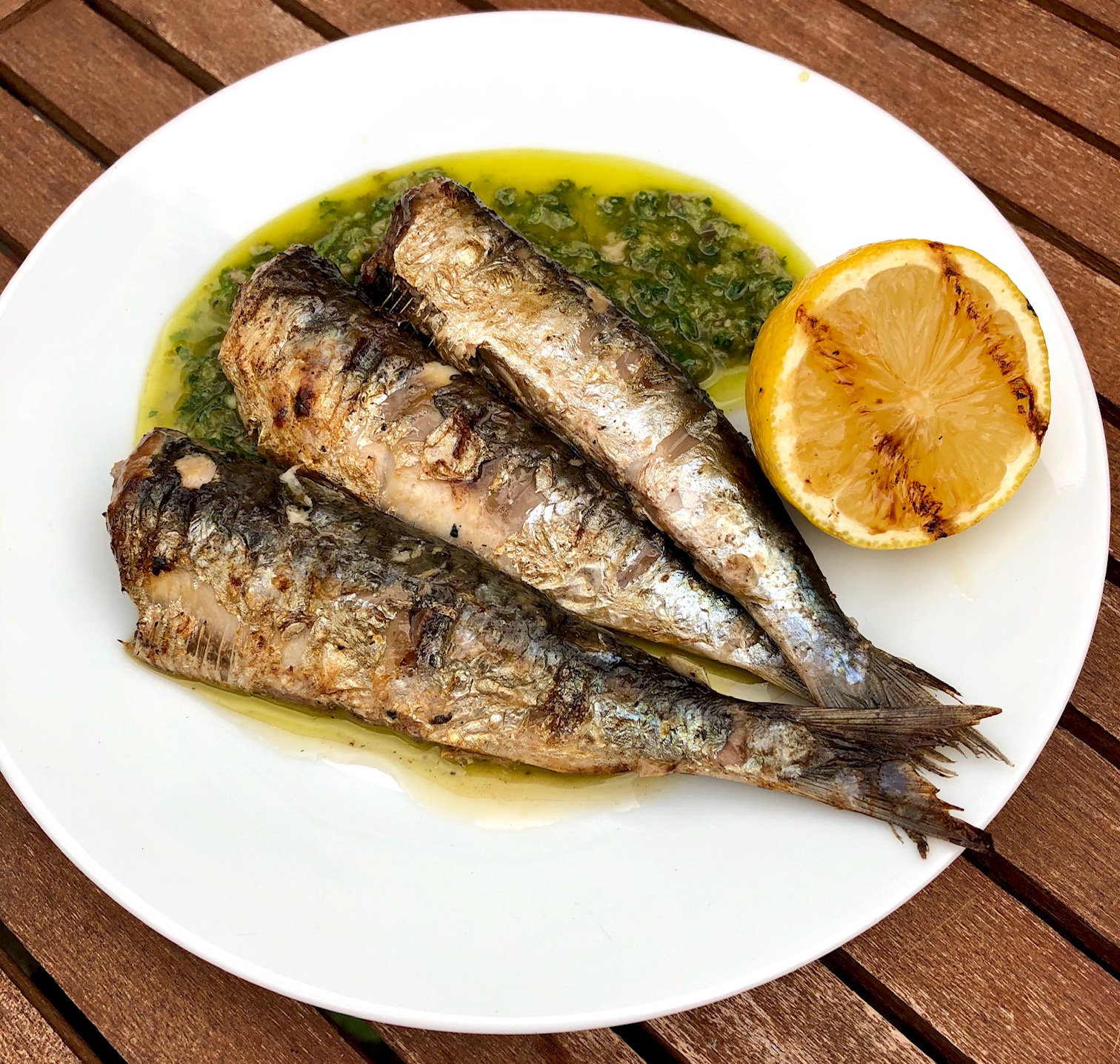 I love sardines. They remind me of holidays, of eating outdoors and of sunshine. They are so delicious that they don’t need any fancy accompaniments, just grill them and serve them with some lemon and I’m perfectly happy.

In fact it’s usually one of the first things I eat when we go to Greece every year. Somehow those little fish mark the start of a holiday.

So it’s no wonder that sardines have been on my list of things I want to cook for ages.

Originally I wanted to try curing some, in honour of the signature dish at the aptly named Sardine restaurant in Hoxton. Sadly Sardine announced their permanent closure a few months ago. One of the first restaurant casualties of the pandemic. So I stopped looking for sardines in the supermarket (they never had any anyway) and moved on.

Until I got an email from Fresh Cornish Fish telling me that sardines were in season, and therefore in stock, again. Turns out the Cornish sardine fishing season begins in July and goes on until March.

That would explain why Sainsbury’s shelves had no sardines. I blamed the pandemic. But actually it’s just a seasonal product. Sorry Sainsburys.

It’s strange but I don’t really think of fish as seasonal. I think of fruit and veg, which you can’t harvest until it’s ready, as seasonal. Even thought we can import strawberries year round, everyone still eagerly awaits the start of British strawberry season. It marks the start of summer.

But what about fish? Surely there are fish swimming about all year aren’t there?

There’s lots of factors that determine the seasonality of fish. From shoals that migrate in and out of fishing waters to spawning seasons for each species. However, because so much of our fish is frozen, and often imported, we as consumers have lost any sense of when different fish are in season.

This is one of the things I love about buying fish direct from Newlyn in Cornwall. The fishing practices are sustainable, and so they will catch locally and seasonally. So I’m slowly discovering what fish is good to eat when.

It also means I now have a dozen sardines in my freezer.

And I know exactly what I want to do with them. They are going straight on the barbecue.

The smell of sardines on a barbecue instantly transports me back to a Greek holiday. However now I know that three quarters of the sardines caught in this country are exported to Europe, I do wonder if I’ve been eating British fish on my Greek holiday? Let’s hope not….

Turns out simply grilling sardines is exactly how Joanna’s choose to serve them too. This neighbourhood restaurant in Crystal Palace has been cooking up delicious dishes since 1978. Their sardines are served with salsa verde, so I’m making some of that too.

Salsa verde is an Italian herb salsa, mixed with garlic, capers, cornichons and lots of olive oil. I’ve used all sorts of herbs over the years but recently I’ve been using a mix of parsley, oregano, basil and mint, as that’s what I’ve got growing in the garden.

It all goes in a blender, gets blitzed until finely chopped and put in the fridge for later.

Don’t get me wrong. Barbecuing the fish will be simple. I can do that.

But what I’ve never done before is light a barbecue. Aidan and I have always fallen back into the predictable male and female roles when we barbecue. He sorts out the fire. I make the salads.

But after a few weeks of Aidan being back at work and me still being at home I feel like enough of a like a suburban housewife already. I am not just making salads this time. The fire will be my department.

Which actually means I will spend an evening scowling at a barbecue and poking the (barely smouldering) fire as Aidan tries his best to guide me through it.

It doesn’t help that all we could find locally were briquettes which (Aidan assures me) are much harder to light that normal charcoal. So after much prodding and fretting we have what appears to be a few small flames and some glowing embers. I even had a spot of rain, just to give me the full British barbecue experience.

Thankfully the rain cleared up before we got cooking. Seasoned with some salt and pepper and onto the grill went the fish (don’t worry I defrosted them first). About three minutes on each side was all it took.

We sat down to eat our sardines after I chucked some burgers and sausages on the grill. Let’s face it, trying to light a fire for nearly an hour means I can’t just cook a few little fish. Now I’ve got the fire, I’m going to cook as much as I can on it.

Sat outside in the garden, tucking into the grilled fish with salsa verde and a glass of rose was the perfect way to spend an evening. We even had the neighbours cat sat at our feet begging for scraps, just like we would in Greece with all the local strays.

I may not be having a holiday this year but I am having a holiday from my kitchen. After six months of cooking in my tired 70s pine kitchen (and when I say tired, I mean completely knackered) it’s time to get the builders in and get the wall down. In about a month we will have a brand new kitchen diner!

However in the short term this means me living without a kitchen for three weeks.

So I’m praying for good weather. Then at least some of the time our barbecue can save us from a diet of toast and microwave meals.

But if I know the British weather this will mean it will rain solidly for the full three weeks of building work. So apologies in advance. Just blame my lack of kitchen.