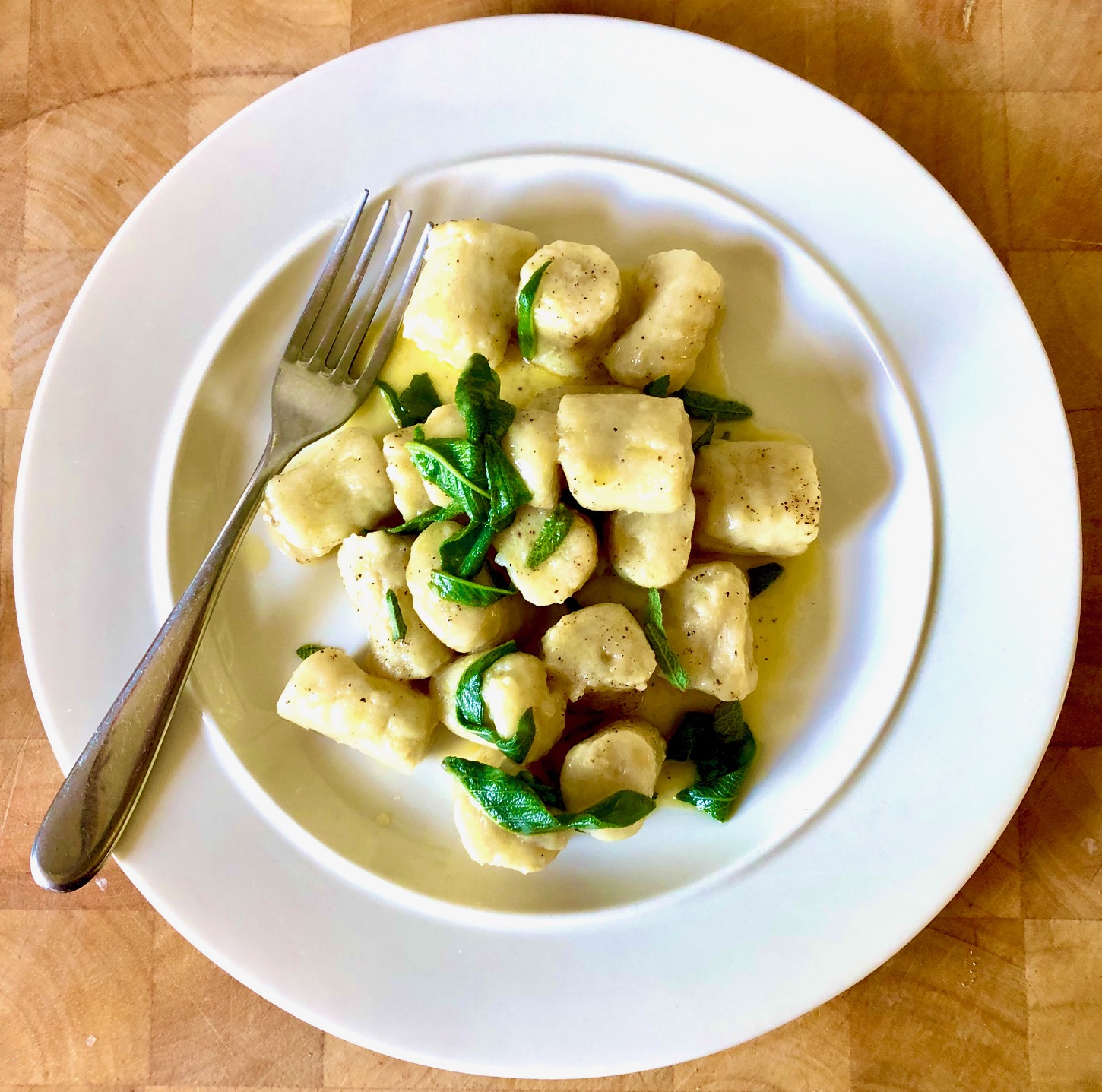 I’ve never really got gnocchi. I’ve eaten it in restaurants a few times. But not often. The main issue is that they inevitably appear on menus that also have pasta. In the pasta vs. gnocchi contest, for me pasta will win. Every time.

I had a go and making it once and just ended up with a stodgy, rubbery potato balls. Not pleasant.

But then I saw one of Bancone’s chefs, Stefano, making them on an Instagram video. And I thought why not? Give them another go.

Well, if I’m honest that’s not the whole story. I made Aidan carry a 2.5kg bag of Maris Piper potatoes back from the supermarket this week. A recipe I wanted to try needed Maris Pipers.

Why do supermarkets only ever sell new potatoes and baking potatoes loose? Why not save the plastic and let us pick the potatoes we want, in the quantities we want? I think that’s probably a rant for another day…

But after getting this small mountain of potatoes home I had to come up with a plan for how to use (nearly all) of them.

I never used to buy into the idea that certain potatoes were better for certain types of cooking. Sure I got that baking potatoes were good for jackets, but I just thought that was because of their size. You’d have to bake a hell of a lot of jersey royals to have a good enough base for the cheese and baked beans about to be piled on top.

But then I made a fish pie using new potatoes for the mash. This was not good. Aidan still reminds me of it now. The time I ruined what is usually (small brag here) one of my best dishes. It was poached fish topped in a sort of potato glue. That once eaten coated your whole mouth so you couldn’t even enjoy the rest of it after scraping the remaining potato to one side. Disaster.

Now when someone tells me I need a certain potato. I listen.

However I have absolutely no idea if a Maris Piper is a good potato for gnocchi. But good or not, it will use some up. And seeing as I’m not convinced by gnocchi anyway theres no pressure.

I can just make some pasta for lunch if it doesn’t work.

No, concentrate. Back to gnocchi.

I watch the video a couple of times and it seems simple enough. I can already see where I went wrong making them last time. You need to boil the potatoes whole. Still in their skins. A bit of research tells me this stops the potato from taking on too much water and therefore becoming stodgy. Sounds very familiar.

I’m only cooking for me today (Aidan’s at work, I’m not being mean). According to Stefano this means I need 250g of potato. Which sounds like loads. But in reality is just two medium sized maris pipers. I would eat that much potato as part of a roast dinner. And these potatoes are pretty much my entire lunch.

So into boiling water they go. There’s no time. Just until they are cooked.

I let them boil for just over 20 minutes and then stick a knife in to see if they are cooked.

Hang on. I wasn’t meant to pierce the skins. Thats the whole bloody point. Bollocks.

So I take them out before too much water can get in and cross my fingers that I’ve not ruined it already. Visions of potato glue start to flash before my eyes. This will be fish pie all over again.

I leave them to cool for a few minutes, mainly so I can calm down, and then peel off the skins.

Now this is interesting. Last time I just used a potato masher. How else are you meant to mash a potato? If you don’t have a professional looking piece of kit that chef is using in the video (a moulin? anyone?) then Stefano says just use a fork. Apparently a masher would give the wrong consistency.

The fork works really well. The potatoes must be cooked if you can mash them with a fork. Phew!

Stefano also mixes the flour in with his hands, in the same way you would use your hands to mix a dough. Well I suppose that’s what it is now, not just mashed potato. Maybe that’s where I went wrong before.

So in goes 60g of plain flour and I mix until it forms together into a ball. Forming a ball with the dough is one thing, getting it to stay together as your try and roll it into thin sausage shapes is quite another.

But after a few attempts it starts to stay together a bit better. Maybe it just needed to be worked a bit more. Who knows.

Next to cut them into little pieces. Easy enough.

Now the crucial step. The shaping.

Stefano makes this look easy. He rolls them down the prongs of a fork whilst making a dent on the back with his thumb and then they simply drop off, looking perfect.

I do not have the same natural talent it seems. I quickly establish I have two choices.

Either I can gently roll each gnocchi down the fork to create the nice ridge patterns.

Or press into it with my thumb to make the indent. But then I have to really push the gnocchi off the fork, ruining both the ridges and the indent. I go for the first option and just have nice little lines on mine.

I read somewhere that gnocchi floats when it’s cooked. Stefano says to cook it for a minute. I leave mine a tiny bit longer and they start to drift upwards. I scoop them out and pop them straight into the melted sage butter.

A quick swirl in the pan for a minute and they’re done!

And wow they are good. These are not stodgy potato balls. No potato glue here. They are light and fluffy! And most importantly have been perfectly coated in that herby butter.

So thank you Stefano. Thank you Bancone. For changing my mind about gnocchi. I’ll be sure to order a plate of it when I visit you.

But hang on. A look at your menu and I change my mind. I’ve heard about your silk handkerchief pasta. I really want that. Or your ox cheek ravioli. That sounds like heaven! Pasta still wins over gnocchi. And I have a feeling it always will.

So it seems I can be convinced with gnocchi up to a point. I might not order it in a restaurant any time soon. But I will make it at home again.

Next time I need a bag of potatoes.