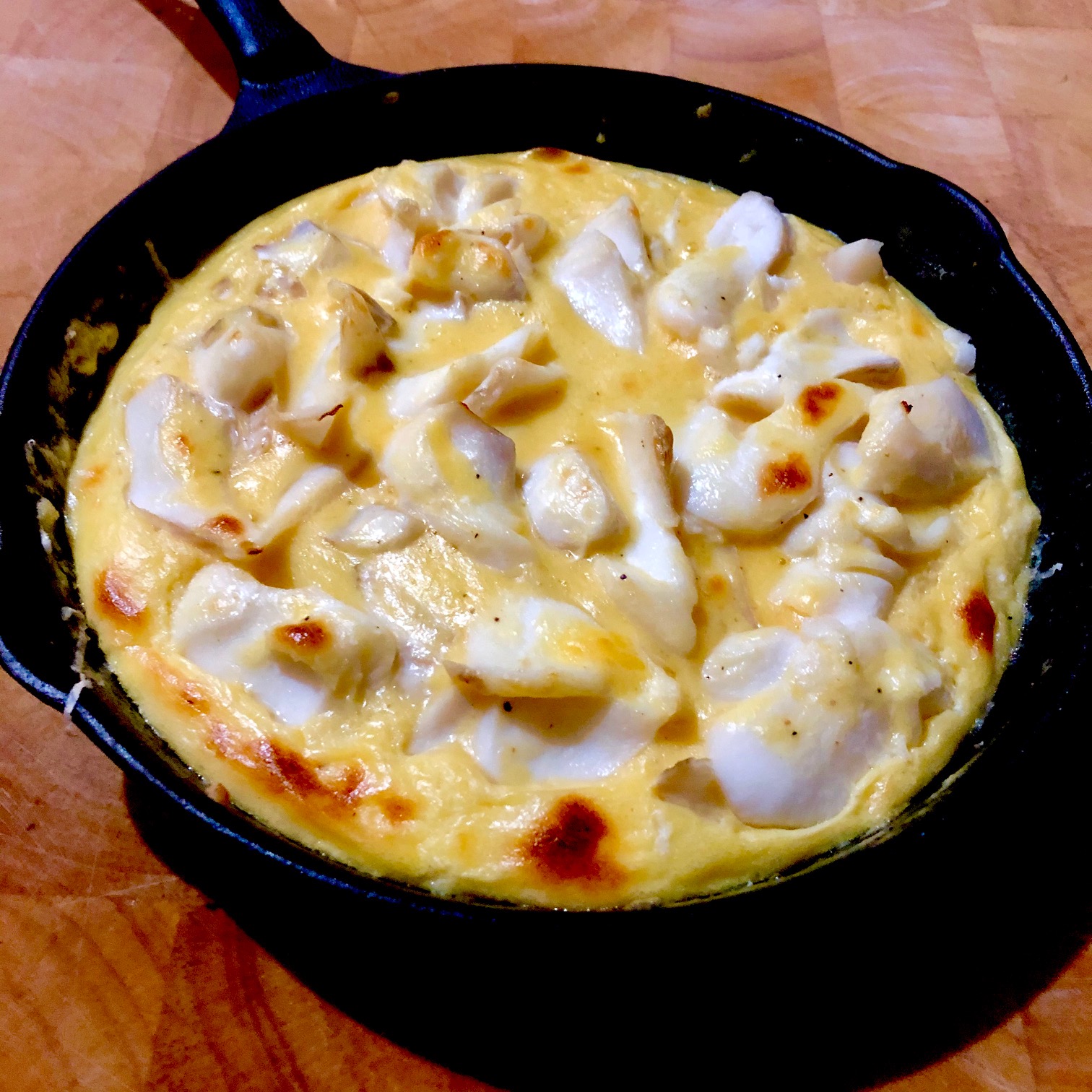 inspired by The Hand & Flowers

As it’s the start of the Easter weekend I’ve decided to make something a bit indulgent. And not many things feel more luxurious than eggs right now.

But seeing as my local corner shop seems to be well stocked I thought it was time for a blow out. Sod’s law will mean that he will have no more eggs tomorrow. In which case I’ve just used up a weeks worth of eggs in one dish….

The Hand and Flowers is on my list of restaurants I’ve always wanted to visit. It’s not just on the list… it’s top of the list. I’ve love the idea of Tom Kerridge and his team elevating pub food to a Michelin starred level.

Here we go. My attempt at a Michelin starred omelette.

After a bit of research I find this video on youtube. Seems reasonable straightforward. Tom even says its “no faff”. I’ll be fine. Which is good because I’m starting to get hungry.

So I’ve made hollandaise once before. I’ve poached fish in milk. The béchamel (or white sauce to us common folk) is easy peasy.

I first looked at this recipe last week. Realising I didn’t have a suitable pan I go online and order one that I reckon is small enough for a two person omelette. The pan will need to go under the grill as I don’t have a blowtorch. Maybe I should have bought one of those as well? But I’m not sure I can be trusted with a blowtorch yet. Seems like a recipe for disaster!

Now to crack on with some serious egg maths (pun totally intended).

I’ll just make a small amount of hollandaise. That’s one egg yolk. I need two more egg yolks for the glaze. And then I reckon five whole eggs to make the actual omelette part. Hang on…. that’s 8 eggs!! This is getting out of hand already.

In the end I make the omelette mix out of 4 whole eggs and an egg white (from the hollandaise). The two other egg whites go into the fridge to be used tomorrow.

Multitasking, as I might have mentioned before, is not my strong point. So I’m making all the components first and at the end all I have to concentrate on is cooking the eggs.

So by now (after working out the egg maths and separating the yolks) we are nearly half an hour in. I start with the hollandaise.

I use Jamie’s hollandaise recipe. It works pretty well but whisking the sauce to thicken takes ages. My arm starts aching and Aidan takes over. The sauce thickens and he goes off to bask in the glory of “saving the hollandaise”.

Next is the fish. Smoked haddock, whole milk, black peppercorns parsley stalks and a bay leaf go into a pan and are left to slowly heat up. Once it starts to bubble it’s off the heat and left to infuse.

Our old electric hob means this also takes ages. We are well over an hour now.

Onto the white sauce. Oh wait hang on. I’ve already used all the small pans, the whisk and the one wooden spoon we own. So washing up first. Really starting to get quite peckish now.

So I make the white sauce. Butter melted and flour added to make a roux. Then the poaching milk from the fish slowly added and then the sauce left to thicken.

Finally we are ready to make the omelette!!! Beaten eggs go into my new pan on a low heat. Tom says you have to cook them slowly. This is not what a (now very) hungry cook wants to hear.

Eventually they resemble a sort of soft scrambled egg and I take them off the heat. I’m not sure if that counts as almost set. But at least I know they’re cooked enough to eat.

I’ve forgotten to turn the grill on. I crank it up to high and hope it heats up quickly (thankfully our oven is not as ancient as our hob!)

Parmesan goes on top of the eggs. Followed by the flaked fish and then I spoon the glaze over the top. The glaze is equal parts hollandaise, béchamel and egg yolk. There’s still some fish poking through the glaze but never mind that. Maybe it’s not enough glaze. Maybe it’s too much fish. Either way its on now. And I’ve run out of eggs.

Under the grill it goes.

I peer in, desperately waiting for the top to look even a little bit scorched. You know how Bake Off contestants stare through their oven doors looking anxiously at the food inside? I reckon I looked like that. Except with a beer rather than a cup of tea. I needed a drink by this point.

The two hour mark is fast approaching and Aidan reappears, obviously starving. I proudly get the omelette out from under the grill! It looks OK. Definitely not likes Tom’s. Definitely not scorched enough. But it looks perfectly edible. And it smells great!

I try cutting it into quarters and lifting the omelette out of the dish. It disintegrates into a pile of golden mush.

But you know what… it was the most amazing tasting plate of mush I have ever had! Maybe that’s because I was just so hungry. But any dinner containing that much butter and egg yolk can’t taste bad!

So there you have it. Two hours, a ton of washing up and several beers later.

A plate of delicious mush.

I feel like Bridget Jones. You know the part where she hosts her birthday dinner party.

I’ve actually got new found respect for the woman. If an omelette took me two hours (and can we even call the end result an omelette??) who knows how long it would have taken for me to make blue soup.

AND marmalade. I dread to think.