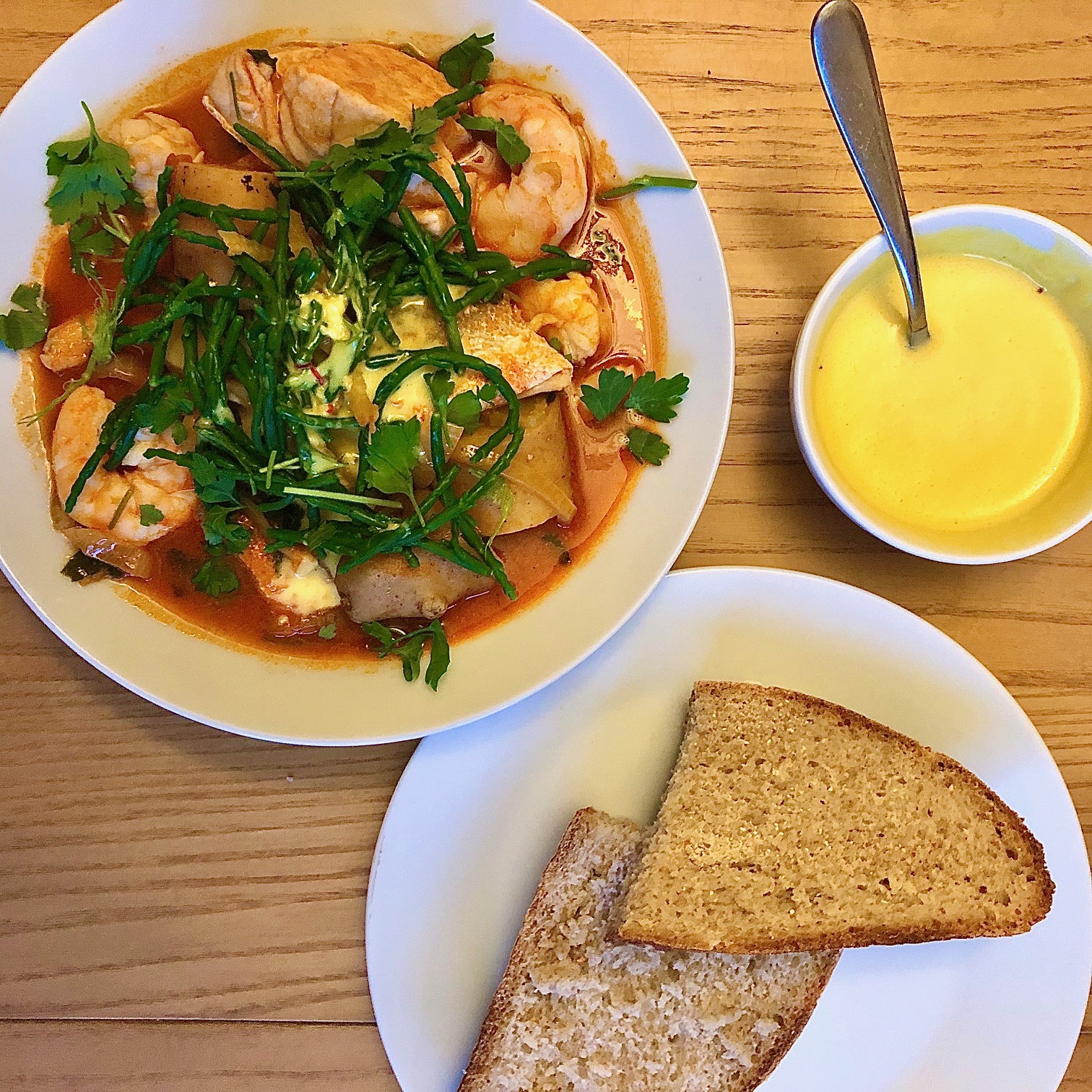 inspired by Webbe’s at The Fish Café

I realise that I’ve been very London focused with the blog recently. In fact the last time I was inspired by a restaurant outside of the capital was on day 35 when I made Scallops in Seaweed Butter. So well over a month ago. Not good.

So it’s time for another trip to the British coast, and anther seafood dish to go with it.

Rye in East Sussex is a really pretty town with winding streets filled with old pubs and antique shops. It’s also just inland from Camber Sands which is such a vast expanse of beach that it doesn’t feel like you’re still in England.

Usually on a weekend away Aidan and I have a tradition of seeking out a local Thai restaurant for dinner. Often we would go away on a Sunday night, as we can be flexible with work, and this often meant a lot of other restaurants would be closed. But we kept up the tradition because we discovered that the Thai food you can get outside of London is, usually, so much better.

However on this particular trip the Thai restaurant (only one in Rye) was fully booked. So we wandered off looking for dinner elsewhere.

We found Webbe’s at The Fish Cafe. And I’m so glad we did. A family run restaurant using local fish caught off the south coast. Dinner was really delicious. Especially my fish stew.

So how should I go about making a fish stew?

After a bit of research it seems the basis of a good fish stew starts with the stock.

Hmmm. The only fish stock I’ve got are blue foil wrapped cubes which I’m not sure will be up to the task. I’m not going to find fish stock at the supermarket and with their fish counters closed it’s pretty unlikely I’ll find any whole fish from which I could make a stock either.

However the frozen aisle of the supermarket has the answer. A bag of frozen whole king prawns.

I’ll make a stock out of the prawn heads and shells. I’ve done something similar before when making the sauce for Jamie Oliver’s Prawn Linguine.

So I fry the prawn heads and shells with some onion, garlic, fennel and celery. I add wine and let it reduce before adding a tin of plum tomatoes and the same amount of water. The sauce bubbles away for about 15 minutes before I blend it and pass it through a sieve.

With hindsight, I should have blended it in batches rather than filling up the food processor. I had to take a short pause to clear up the tomatoey prawn juice that was dripping off my kitchen counter.

The rest is easy. I parboil some new potatoes and then add them to the sauce, along with more sliced fennel, to cook and then for the last few minutes add the pieces of gurnard and peeled prawns.

Gurnard apparently is quite a traditional fish to use in a stew. Italian chefs cook the sauce with gurnard and then blitz it smooth, like I did with the prawns. They would then add other fish fillets in pieces.

But I think the gurnard is delicious and deserves to be the star of the show. Plus now I’ve only got two more fillets to eat from my Fresh Cornish Fish order before I’ve officially run out.

The stew makes a brilliant dinner. Topped with samphire and lots of saffron aioli, plus chunks of crusty homemade sourdough to dunk into the broth.

My first, and definitely not my last, homemade fish stew.

I think it might be time for another fish delivery… 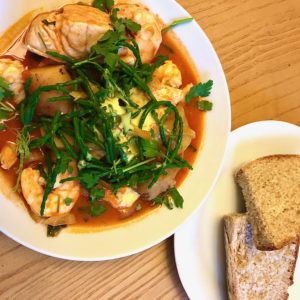