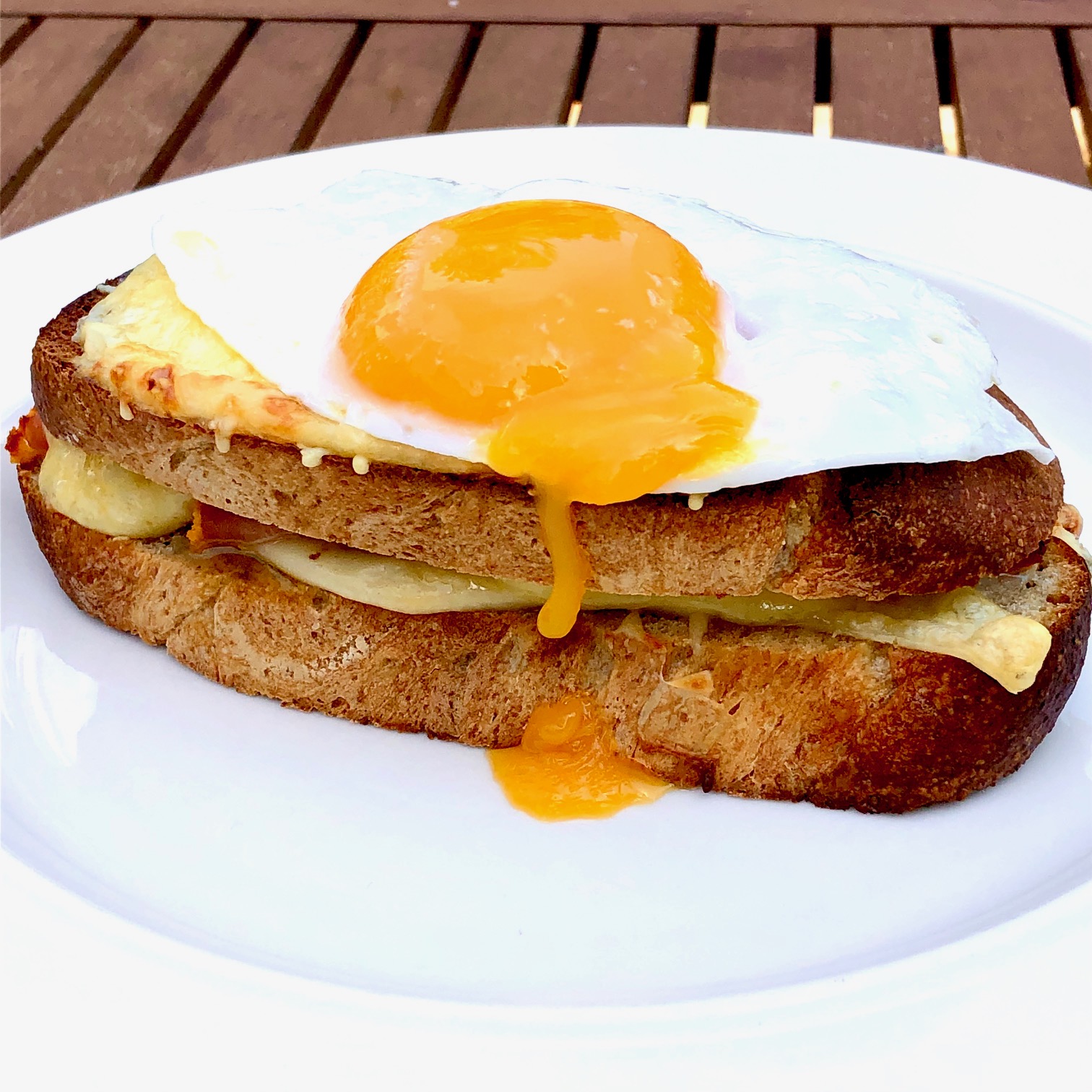 Since getting a ham and cheese croissant from Boulangerie Jade in Blackheath earlier this week I have been craving more melted cheese.

I also only have one duck egg left. The duck eggs that I bought by accident in the supermarket. I got so excited that they had eggs that they went into my basket without a second thought. Only when I got home did I realise. That would explain why they cost so much.

But seeing as duck eggs are delicious I’m not complaining. But one left on it’s own won’t do. So it’s going on a toasted sandwich.

Because that’s basically all a Croque Monsieur is. A really good ham and cheese toastie. Add an egg and it becomes a Madame. Apparently this is because the fried egg resembles the shape of a ladies hat. That’s my fascinating fact for the day sorted.

The East Dulwich branch of Boulangerie Jade is more of an eat in cafe rather than just a bakery. So they serve these here alongside other amazing salads and brunch style dishes. A bit far for me right now so I’m making one at home.

Just because a dish seems simple (it’s only a sandwich after all) doesn’t mean it will necessarily be good. I learnt that lesson with Cacio e Pepe.

And I have had some terrible Croque Monsieurs before.

Without a doubt the worst was in Bruges. 10 euros for two slices of processed bread, a piece of ham and a slice of what I’m fairly sure was burger cheese. They couldn’t even be bothered to toast it properly. It was soggy and disgusting.

What made it so bad was that pretty much every restaurant (other than crazy expensive places) seemed to be a tourist trap. They charged extra for everything. Want extra cutlery to share a pudding? That will be 2 euros. Ketchup with your fries? 1.50 euros. Yes, really.

I really tried. Reading the menu of every restaurant we passed. Going down side streets. Looking on trip advisor. Nothing helped. We were doomed to a weekend of bad food and excellent beer. As you can imagine it was rather a boozy trip.

In fact by the end of a long weekend I remember standing in Brussels train station, nursing a hangover and waiting for our Eurostar. I bought a plastic wrapped baguette from a kiosk. It was the best thing I ate in the entire trip.

But when you do a Croque Monsieur right can be a thing of beauty. Even better with an egg on top.

So here’s what I did.

The trick is to make a really thick béchamel. So that it is spreadable rather than something you have to spoon onto your bread. So I use less milk, but also cook it for longer.

I slice two pieces off my (homemade, very proud of myself) sourdough loaf and toast them on one side. Then I layer up the sandwich. Béchamel, ham, mustard, cheese. Dijon mustard, because it’s a French sandwich, but also English mustard is too strong for me.

But I’m using English cheese. Ogleshield from Neals Yard Dairy as it’s great when melted. And it’s what I have in my fridge. Traditionally it would be Gruyère, but this works just as well. We’ll call it Anglo-French fusion.

Instead of putting the finished sandwich under the grill I decide to bake mine in the oven. I worry under the grill that the heat will burn the top before the centre has become properly melted and gooey. 10 minutes in an oven works a treat.

Rather wonderfully the fried duck egg fits across the entire of the top of the sandwich. It was meant to be.

It’s so good. A really decadent and delicious lunch. I don’t think I can make this with a normal hens egg again. The yolk in a duck egg is just so much larger and richer. And therefore yummier.

I’ll have to ‘accidentally’ buy some more duck eggs. 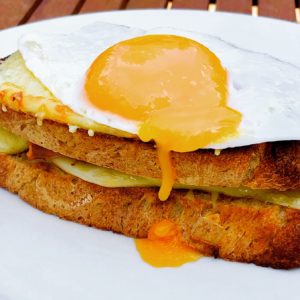