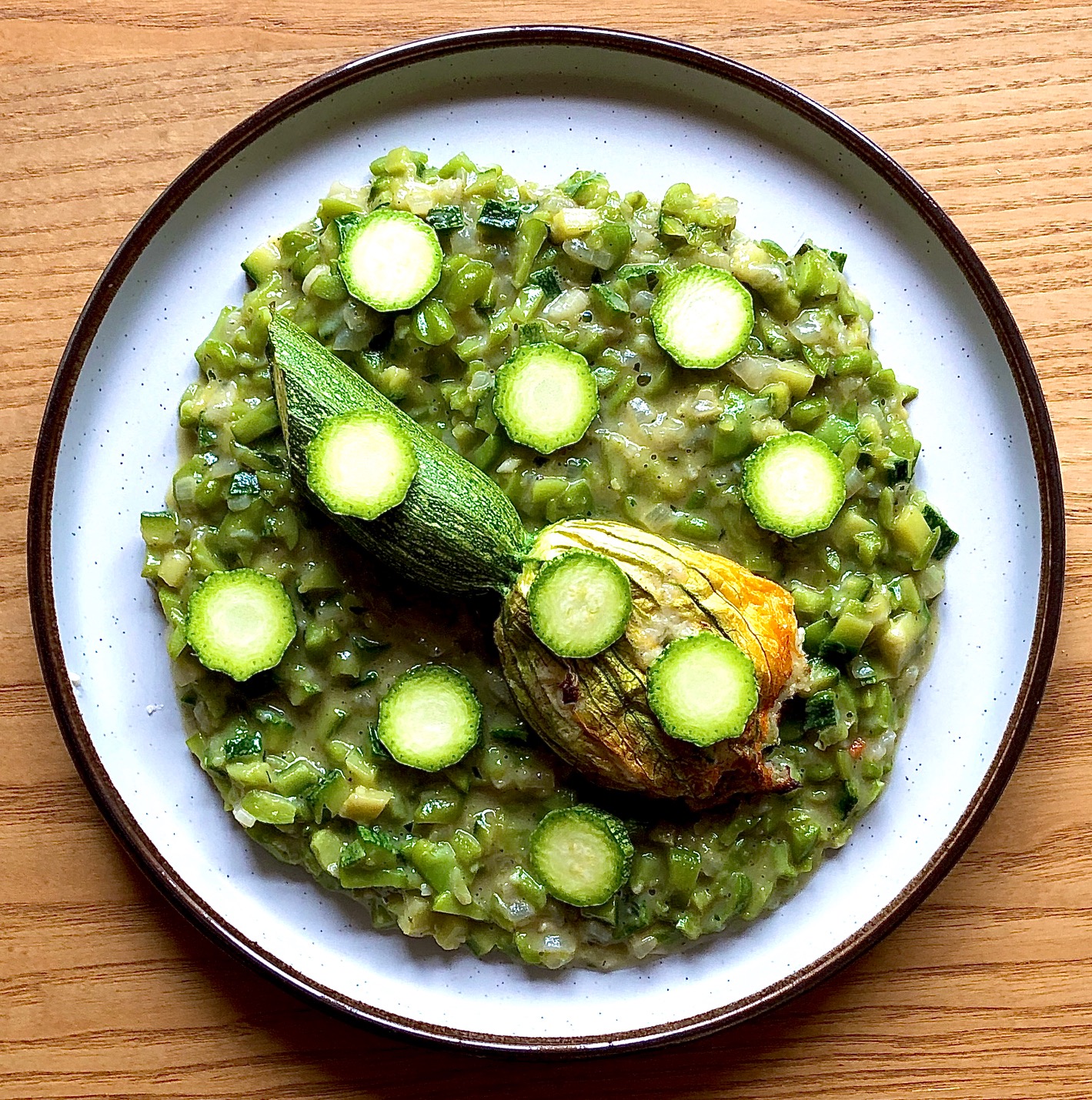 inspired by The Kitchin

I’ve had a few days off from cooking.

A mix of helping reopen Aidan’s pub, picking up some work (work…remember that??) and restaurants reopening all means that other than popping a supermarket pizza in the oven one evening, this is the first time I am cooking in four days.

Even a couple of weeks ago the idea of not cooking for four days would have been ludicrous. But the last time I cooked from scratch was on Monday evening. Even then, it was only a carbonara.

I have to admit the break has been nice. Eating out again has been amazing!

Last night we went to Santore, an Italian restaurant on Exmouth Market. It’s one of my favourite places to eat. The tables were spaced out, the staff wore masks, the menus were paper. All a bit different, sure, but as soon as someone poured me a glass of wine I relaxed. I was eating in a restaurant!

After weeks of eating our home grown courgettes I didn’t fancy their Zucchini Fritti. Instead we shared clams and prawns in a tomato sauce for starter. Not only was it served with some amazing crusty garlic bread, but there were other, softer pieces of bread under the stew, that had soaked up all the amazing flavours. I’m definitely trying that at home!

A bottle of lovely Italian white wine and a couple of espressos rounded off the perfect first meal out.

I didn’t take any photos of my food. If I’m honest the best thing about eating out is putting my phone away and talking to the people I’m with. At least I had to say that otherwise Aidan would also get his phone out. To watch football. There was no way I was letting that happen!

But now it’s Friday, the pub is open, my work is done. The meals out have been eaten. I am back at home. More importantly, I am back in the kitchen.

A lot can happen in four days. I’ve had to throw away some bits and bobs from the fridge. They have gone bad or are out of date. I can’t remember the last time that happened.

I have three pints of milk waiting to be drunk. That’s Monday, Wednesday and Fridays deliveries from the milkman. All unopened.

I’ve also been outside to the veg patch. Yes, a lot can happen in four days. A lot of courgettes can happen, that’s for sure.

So now I’m back on familiar ground. Standing in my kitchen, thinking what on earth and I going to do with these courgettes? It doesn’t help that extra courgettes have also arrived in my Oddbox today.

So it’s courgettes for lunch (again).

How gorgeous does this dish look??

I saved this photo on Instagram ages ago, when I first needed courgette recipe inspiration.

It’s from Lachlan Archibald who is the Head Chef at The Kitchin. The Michelin starred Edinburgh restaurant owned by Tom Kitchin.

Edinburgh is one of my favourite cities.

I’ve been to the Fringe festival many times, but you only really discover how special this city is if you go outside of August. I hate to admit it, but the droves of theatre makers and audiences might make for an amazing festival, but they ruin Edinburgh.

When a city is that full with people it’s hard to move, let alone explore.

For me being able to wander around and spontaneously find an amazing bar, a tiny restaurant or a breathtaking view is the best part of exploring a city.

You could argue that a lot of spontaneity has been taken out of our lives recently. Even things like going out to eat, or to your local pub, might now involve preplanning and booking in advance.

This is just one of the changes we’ve seen in our hospitality industry in the last week since reopening.

Some people might think that a Michelin starred restuarant might not be as affected by the new social distancing rules. But you would be wrong.

Sure, people might not spontaneously walk in to one of these places. You often book weeks or months in advance for these great restaurants. It doesn’t matter if footfall outside your restaurant has died down. You are unlikely to rely on walk ins.

But you do rely on people often travelling great distances to eat in your restaurant. From all over the country, and often from around the world. So Michelin starred restaurants will be busy finding new ways to appeal to their local customers.

Another problem these high end restaurants face is how to socially distance in the kitchen. Food of this standard takes a lot of time, and a lot of people. Most restaurant kitchens are tiny anyway. You need to dedicate as much of your floor space to front of house as possible. The more diners you can seat, the better chance you have of your business being successful.

So how do large teams of highly skilled chefs carry on producing dishes to such high standards, all whilst observing social distancing? I have no idea.

The Kitchin is reopening on the 28th July. Probably taking the extra time to try and work out how they can work safely, and consequently how this might change their food offering.

One thing is for sure, the philosophy of the restaurant will remain the same.

The Kitchin’s philosophy ‘From Nature to Plate’, is a true reflection of Chef Tom Kitchin’s passion for the finest, freshest Scottish seasonal produce and the cooking at the restaurant reflects Tom’s training under some of the world’s best chefs blended with his own Scottish heritage. The Kitchin presents modern British cuisine influenced by French cooking techniques and an appreciation of the best quality ingredients available from Scotland’s fantastic natural larder. The produce at The Kitchin arrives fresh daily thanks to a close team of selected suppliers who supply the restaurant with seasonal produce every day. All the meat and fish is bought in whole and all the butchering and filleting is done in-house daily.

Well I might not be eating Scottish produce today. But I am eating produce local to me. In the case of the courgettes, very very local. Just the other end of the garden.

The broad beans were from a bit further afield. Borough Market. It’s the beginning of British broad bean season right now. I love these bright green beans. But they do take a bit of work.

First I crack open the pods and remove the beans. After blanching them in boiling water for a minute, each one gets squeezed out of it’s tough outer skin, to reveal the vibrant green bean inside. This alone takes me the best part of twenty minutes. Just to prep enough beans for one person.

Next I need to finely dice a courgette. If I’m taking inspiration from a Michelin starred dish, the chopping needs to be fine and precise. So I spend a fair bit of time cutting my rather wonky courgette into as perfect and even little squares as I can manage.

Likewise with half an onion and a clove of garlic.

This isn’t a normal risotto. Rather than using rice the beans and chopped (also to a consistent, grain of rice type size) and used instead.

Usually I can’t stand this kind of cooking. Of all the courgettes I’ve eaten in the past few weeks I’ve never once been tempted to turn it into courgetti. Just because it can be turned into long, thin strands, does not make it a good substitute for spaghetti.

But seeing as eating out over the past few days has involved quite a lot of carbs, a lighter lunch is actually pretty appealing right now. Worst case scenario I’ll end up with something more like a bean stew than a risotto. That wouldn’t be the end of the world.

So in goes an onion to gently fry in some olive oil. Next I add the garlic and the diced courgette. I stir in the chopped beans and a splash of white wine. Then I add stock a little at a time. I’m not sure how much stock actually absorbs into the beans. I reckon a lot of it just evaporates and then I add more. It certainly doesn’t feel like I’m cooking a risotto.

But over time the chopped beans do swell up a tiny bit, the veg all softens and a sort of creamy sauce begins to appear. I take it off the heat and stir in butter and parmesan. And lots of fresh oregano and basil.

During all of this not quite risotto making I’ve also been having a second attempt at stuffing a courgette flower. My first attempt, which you can read about here, was quite tricky. But rather than frying them this time I’m going to bake them in the oven.

Because of that (and also what I can find in my fridge, now I’ve thrown out the rather mouldy goats cheese) I make a quick béchamel and then add in some egg white and pecorino. Also the courgette I chop off the end of the flower I dice and fry in butter, then add to this mix.

Then I let it cool and stuff it into the flower, twisting the tops of the petals together in the hope that the filling actually stays inside this time.

So my courgette stuffed with, well mainly courgette if I’m honest, goes into an oven for 20 minutes. I’m so glad I added the egg white as this makes the filling set, and most importantly, stay stuffed inside the flower.

Once I plate up the ‘risotto’ the flower goes on top and I finish with some finely sliced raw courgette discs, in an attempt to make it look a bit fancy, like the dish from The Kitchin. There’s no way I’m putting it on two separate plates though. I have to consider the washing up.

It’s a lovely lunch. It’s definitely not a risotto but the texture of the beans and the flavour is delicious. And I’m chuffed with how well the courgette flower turned out, seeing as I had to make that up mid-risotto making.

So it seems I’ve not forgotten all my cooking skills with my week off.

Just as well really. Plenty more days at home to come. I’m back where I belong (for now).