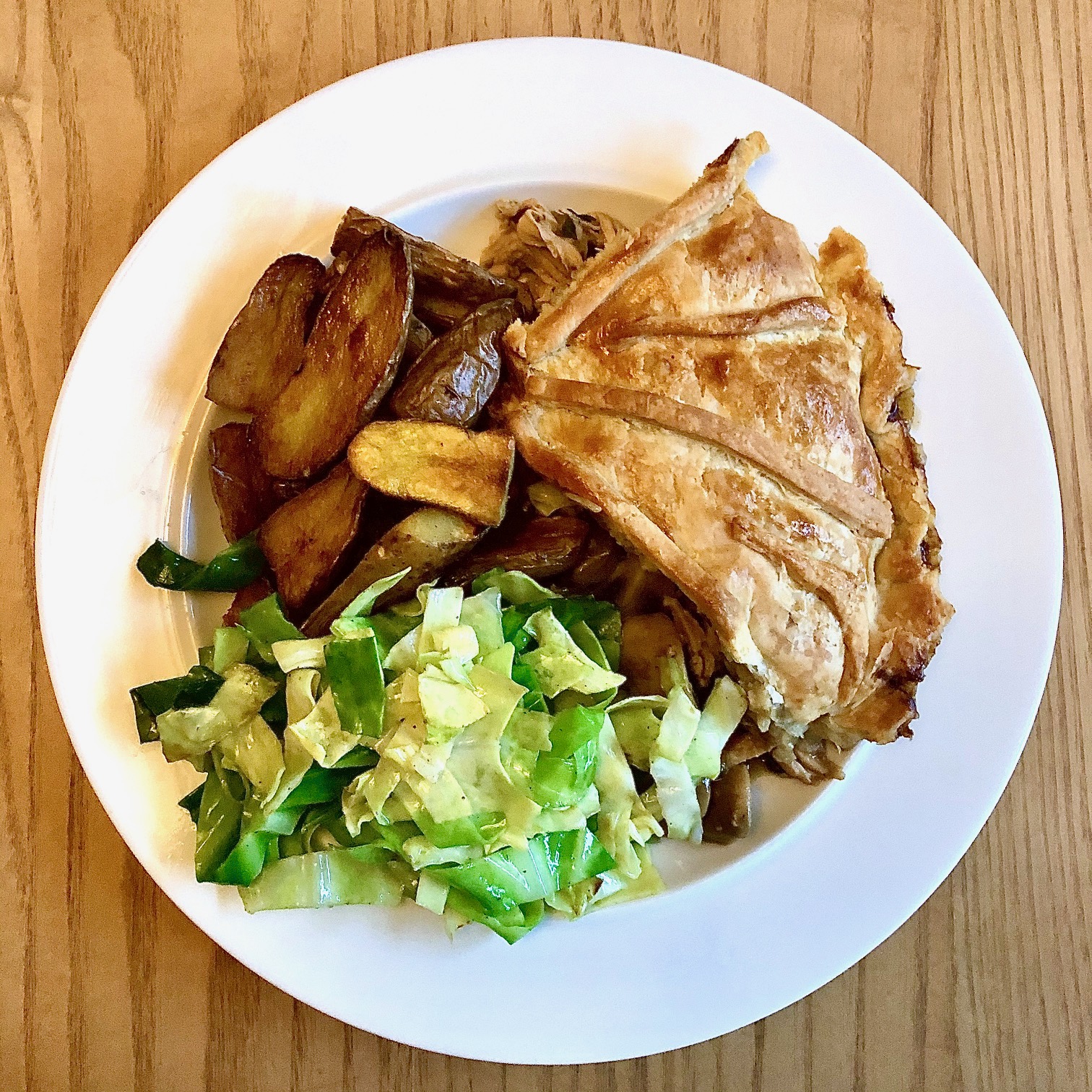 inspired by The Crown Tavern

It’s Father’s Day, so I thought I would pick something to cook inspired by the last place I went for dinner with my Dad. Which just happens to be my local pub!

My Dad came to see our new house in February. We had no idea back then that it would be so long until we saw each other again. With me down in London, and the family in the Midlands, its a bit of a long way for a day trip.

So I’m not be spending Father’s Day with my Dad. Instead I am making a pie.

We’ve cooked more roast dinners over the past few months than we ever had before. We’ve also been branching out from just chicken. In fact over the past couple of months we have roasted chicken, guinea fowl and duck. All of which contribute to this pie in one way or another.

When I was last eating in my local, with my Dad and Stepmum, it wasn’t a chicken pie on the menu. It was a game pie. But like so many good pubs, their pie changes on a regular basis. And I’ve had some excellent pies at The Crown.

A pie is a great dish for a restaurant. You can make the filling out of any leftover meat from the Sunday roasts. And that is exactly what I’m doing too.

I’ve got a mix of chicken and guinea fowl. Both meats have been shredded and mixed in any of the leftover gravy and frozen so I’ve also got the basis of my sauce ready to go. For a bit of added richness I’m adding some leftover gravy from when we roasted a duck a few weeks ago too.

There’s no duck meat left though. Any leftovers got wrapped up with cucumber, spring onions and hoisin sauce for amazing duck pancakes the next day!

There is something really satisfying about making a pie totally from scratch.

So I’m going back to the same rough puff pastry recipe from Paul Hollywood that I used to make my Celeriac & Wild Mushroom Wellington.

It’s so easy to make. I really don’t think I’ll be buying shop bought pastry again. One day I need to be brave and try a full puff pastry. But that’s not today. I’ve left it far too late for that.

Onions, garlic and bacon get fried in a pan and then mushrooms and thyme get added. Once the bacon and mushrooms are golden and the onions are starting to catch I deglaze the pan with a bit of white wine. Then in goes all the defrosted meat and gravy and I let it bubble away until the sauce has reduced slightly.

Off the heat before stirring in a tablespoon of creme fraiche, sone Dijon mustard and lots of chopped parsley.

I try my best to make the top of the pie look nice, artfully arranging strips of pastry into a pattern. At least I try to. My kitchen is a bit warm so the pastry starts to become really difficult to shape and work with.

It needn’t have bothered as no sooner is the pie in the oven than the gravy is bubbling up over the top, ruining the perfect pastry pattern I was trying so hard to create.

But it doesn’t matter.

What it lacks in refinement it makes up for in taste.

I might never be buying pastry again. I might also only ever be making pie again when I have leftovers from a roast. Not only does it makes it easier, but it makes it taste sublime.

I serve mine with pan roasted new potatoes. It’s a compromise as I always want a pie to come with mash. But Aidan much prefers chips. This is a type of potato we can agree on.

So we may not be spending this Sunday cooking roasts with our families. The pubs are not fully booked with Father’s Day celebrations. But this pie turns out to be the perfect way to celebrate the joys of a roast dinner. Even if it’s still a little while before we are back to normal, sitting around a table with loved ones.