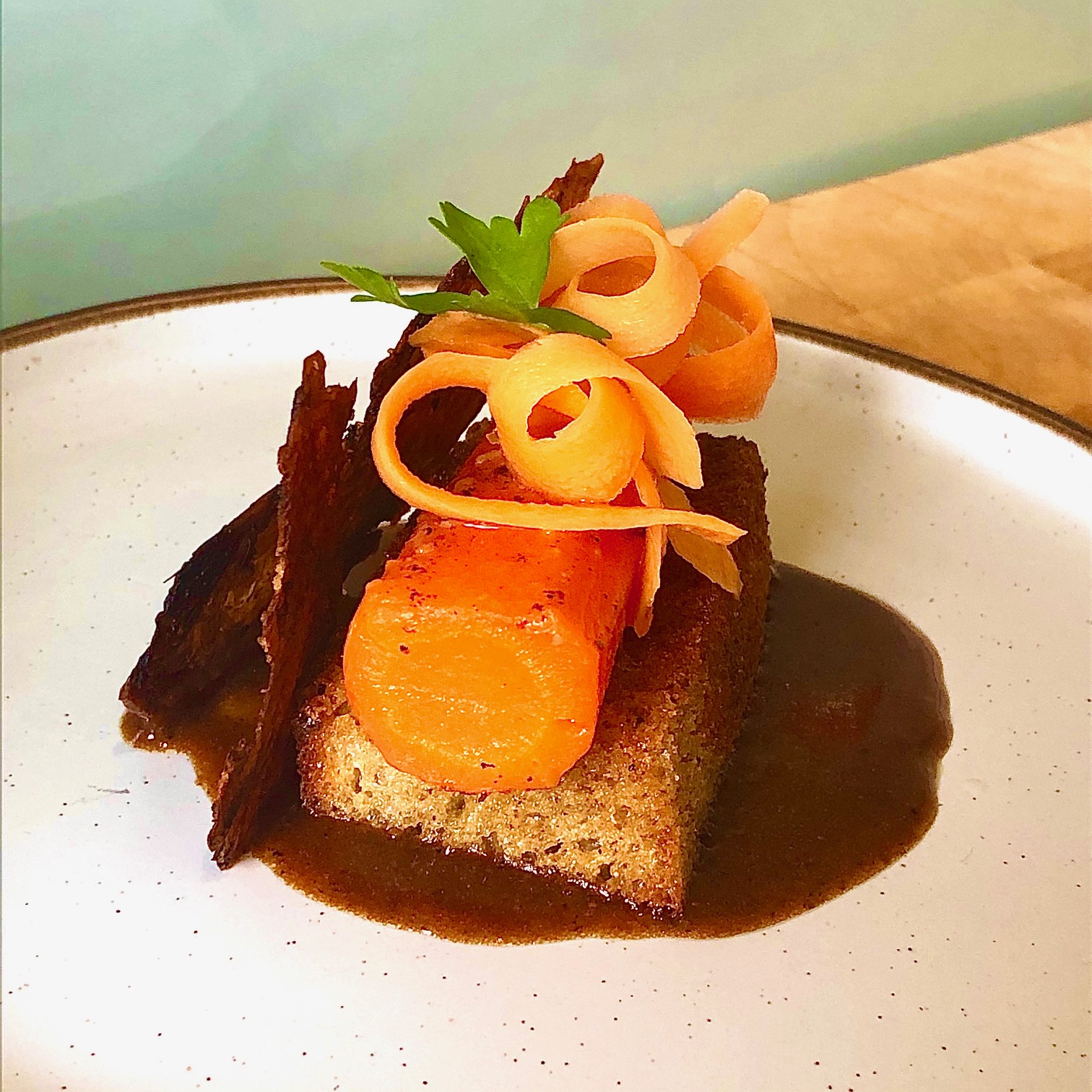 Something I’ve discovered during lockdown is how amazing podcasts are.

I’d listened to a few before, usually theatre related, so therefore I’ve associated them with work rather than as a form of entertainment.

Recently however, I’ve spent hours and hours doing what can only be described as binge-listening.

A mix of cooking and sewing has meant that I’ve had a lot of time when I need something to listen to. After a couple of weeks my playlists seemed dull and the radio began to irritate.

So I started on podcasts.

Do you know what is even better than cooking?

Cooking whilst listening to other people talk about cooking.

My favourite so far is called The Nightcap.

Each episode follows the same format. Simon Alexander (a podcaster and producer) and Paul Foster (chef owner of Salt restaurant) sit down after dinner service with a guest chef and a drink. What follows is a glimpse into Michelin starred life, with lots of hilarious anecdotes, some genius cooking hacks, and truly terrible Tripadvisor reviews.

I grew up a few miles away from Stratford. I went to school in there. Years later, Aidan and I got married in Stratford Town Hall.

So it’s no wonder that I’m curious about a Michelin starred restaurant in my home town.

It seems strange really that Stratford hasn’t had a restaurant like this before. It’s awash with places to eat, catering for the tourists and the pre-theatre crowd.

But maybe that’s why Stratford has never had someone like this.

A pre theatre crowd want something quick. In and out in 90 minutes, tops.

Salt, unusually, doesn’t offer a pre-theare menu. You choose between a 5 and an 8 course tasting menu. There is no way you will fit that in before the curtain rises.

When I think back to my teenage years, spending most of the time in Stratford with my friends, we only really went to two places to eat. Either we picked a chain Italian (Pizza Express, Prezzo, Strada, Ask, Bella Italia…. Stratford had them all) picking one of these interchangeable restaurants based on which discount voucher we had (in the days where these vouchers were on paper, rather than on a phone).

Or we would go to a Chinese restaurant called The Mayflower. Everyone would usually just order a plain chow mien or a portion of egg fried rice. Saving the rest of our money to spend on pitchers of Woo Woo at the Wetherspoons down the road.

How times have changed. Both for me and for Stratford.

The guest chef in each episode comes to Salt restaurant and eats there before they chat in the upstairs room after service has finished.

Therefore ever episode starts the same way. Simon asking “How was dinner?”

And almost always the answer is the same. Everyone can’t stop talking about this amazing carrot dish.

So after listening to 21 episodes of people going on about a bloody carrot dish I’ve made up my mind. I’m going to have to try and make it.

Usually when I’ve decided on cooking a dish I haven’t eaten, I’m going off a picture on Instagram and a menu description. This time I have the added bonus of listening to Paul describing how he makes it. I’m playing podcast detective.

I know it’s meant to taste a bit like a roast dinner. That gets mentioned a lot. Paul also says that there is a crouton that the carrot sits on, which should be chewy rather than crispy.

Well that will work in my favour then. I’ve got some stale sourdough and my bread is definitely chewy.

I’m not found many clues to how how Paul pickles the carrots through.

As I’ve only got a few hours before dinner I decide to take one of my carrots and use a vegetable peeler to create ribbons.

Then I heat cider vinegar, water, salt and sugar in a pan until everything has dissolved and then pour it into a jar with the carrots.

Add some mustard seeds and thyme and I have about four hours for them to pickle away in the fridge.

Whilst I’m in the fridge I get out all the leftover bits from a roast chicken. I have a whole load of trimmings (mainly skin and the fatty bits no one wants to eat) and a bit of leftover gravy. It doesn’t look like much but I’m hopeful.

Apparently Paul puts some chicken jus on the dish. Jus and gravy are the same thing right? Well that’s simple then. My gravy gets put to one side to be reheated “just before service” as chefs would say.

But how should I go about cooking a carrot in chicken fat?

Or more specifically, how should I go about cooking the carrot without chicken fat?

The obvious answer (to the first question, not the second ridiculous one) would be to confit the carrot. But that would involve completely submerging it in fat. Which would mean I would need a lot of chicken fat.

I can’t buy chicken fat in the supermarket. Duck fat, yes. Goose fat, absolutely. But no chicken fat. I guess that’s because both duck and goose have a much higher amount of fat in them, so it’s easier to process and put in a jar.

I’ve got all the fatty bits left from my chicken so I put these in a pan (keeping a couple of bits of skin to one side). I put the pan on a low heat and hope they render down and produce at least some chicken fat.

I get a small amount. But hardly any.

I’m starting to regret not buying goose fat when I had the chance. A goose is definitely not the same as a chicken.

But it’s closer than a cow.

This is what I’m thinking as I add a large amount of butter to the pan. I hope the butter will melt and infuse with all my leftover chicken scraps so it at least tastes like chicken.

I remind myself that everything is better with butter and carry on.

After fifteen minutes I have melted butter with chicken bits in it. But the butter itself doesn’t taste much different. So I add a small amount of chicken stock to create a kind of emulsion. That sounds chef-y doesn’t it? Must be a good idea….

So to this pan of chicken fat, butter, chicken stock, and various chicken trimmings I add a carrot. Pop the lid on and let it cook slowly for about 45 minutes, turning it half way through.

Onto the chicken skin. This is easy. The first thing I cooked for this blog was Chicken Skin Butter, so I’ve made crispy chicken skin before. Simply lay the skin out on a baking tray lined with parchment paper. Sprinkle with salt and cover with more paper. Add another tray on top to press the skin flat and put in a hot oven for 10 minutes. Gorgeous shards of crispy skin.

Back to the crouton.

I cut off the crusts and portion out a decent sized chunk for a crouton.

Paul says he cooks his in loads of butter. So more butter going into a frying pan and in goes the bread.

I wonder at what size a piece of bread is no longer a crouton and is just a fried slice? I’m not great at dainty portions. I’m fairly sure the crouton goes underneath the carrot though, so it’s got to be large enough for that.

I think it definitely counts as a crouton. Just quite a large one.

Either way it looks delicious as I turn it in the pan. All golden and glistening.

Last job is to heat up the chicken gravy in the microwave.

It’s currently tied up in a freezer bag so I just put this in the microwave and give it a minute. Bad idea. There may have been a small explosion of gravy as the plastic bag popped whilst heating. Now quite a lot of the gravy is splattered over the interior of the microwave, rather than ready to go on a plate.

Rooky mistake. Everyone knows not to put tightly sealed things in the microwave, they are bound to explode. The same rule applies to boiled eggs by the way, in case you’re wondering. I found that out the hard way too. Egg on the ceiling.

Time to plate up.

I dollop what little gravy I have left on a plate. I try and make it look beautiful, but it’s harder than it looks. It’s a brown puddle on the plate.

On goes my lovely looking crouton and out comes the carrot from the pan. Once safely balanced on top of the bread I set about dressing it artfully with pickled carrot ribbons. The chicken skin shards are propped up on one side and it is finished with a single parsley leaf.

I admit by the time I’ve stopped faffing about with the plating it’s gone a bit cold. But never mind.

It is delicious. Not quite the taste of a roast dinner (I don’t think my chicken fat substitution quite lived up to the original) but its a great sort of deconstructed chicken and carrot sandwich.

As I stand at the kitchen counter eating my creation I conclude two things.

First, it is possible to make something very special out of humble ingredients.

Secondly, I really should leave it to the professionals.