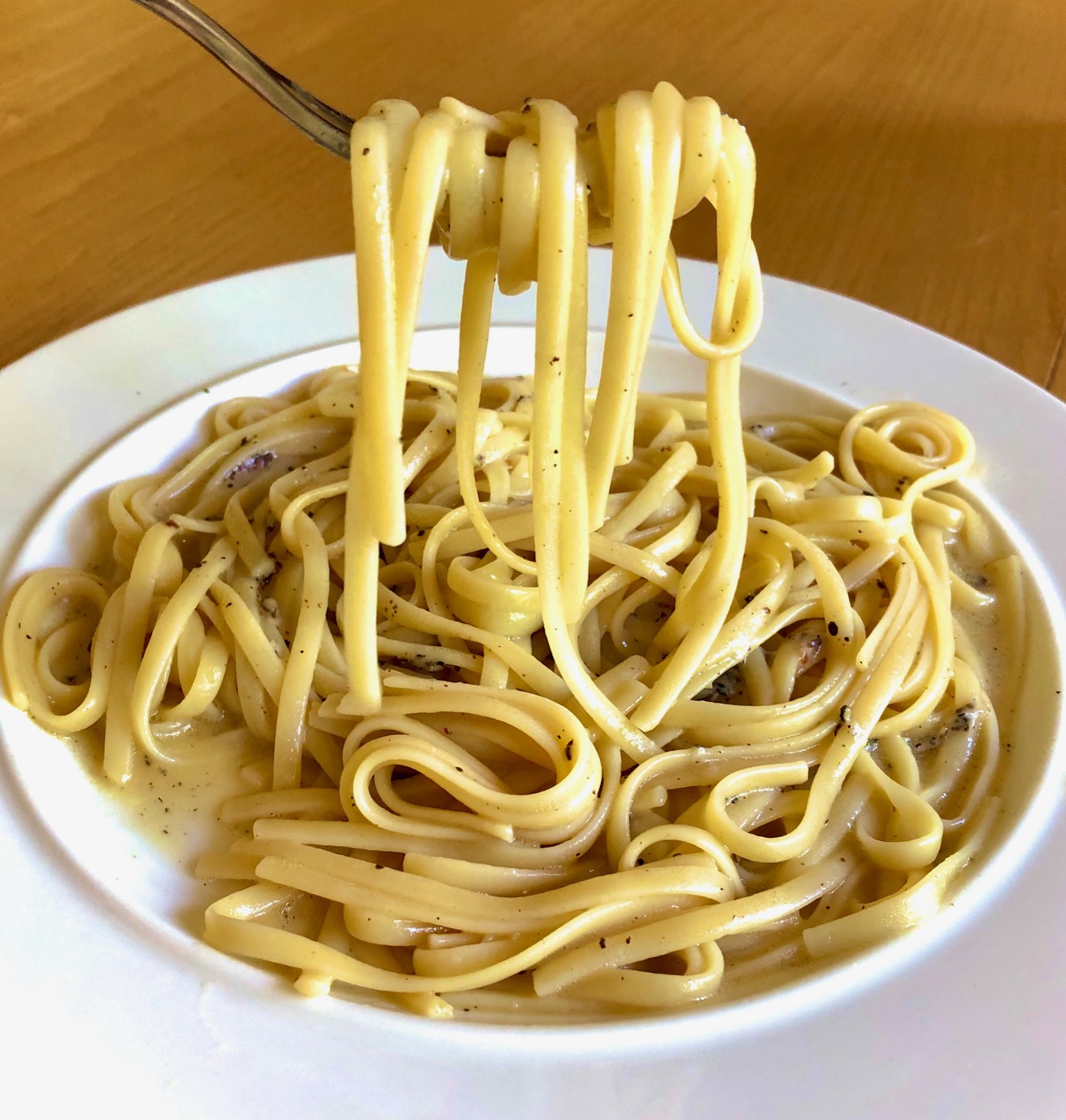 I have a confession to make. Over the past two weeks I have made Cacio e Pepe four times. Not because it’s delicious (even though it is) but because I simply could not get it right.

Cacio e Pepe sounds so simple. A Roman pasta dish which is made with pasta, pecorino and black pepper. That’s it. Basically cheese and pasta.

This dish suddenly seemed to appear on every Italian restaurant menu back in 2016. It was everywhere. It was the food trend of the year. But I have to confess I hadn’t tried it until last year. Even more shameful is the fact that I went to Rome and didn’t eat it.

But I finally did, at Palatino, and instantly understood what all the fuss was about. This was delicious. To this day it is still my favourite Cacio e Pepe. They use Tonnarelli pasta, which is a square cut pasta a little thicker than spaghetti. Other London pasta restaurants might serve it with pici, which is a much thicker, hand rolled pasta, but I love the cheesy sauce wrapped around these thinner, more delicate strands.

What could be simpler?

So I’ve got my ingredients. The trusty “Made in Italy” by Locatelli comes off the cookbook shelf. Slight problem, there is no Cacio e Pepe recipe in there.

OK so a bit more research is required.

I find a Guardian article titled “How To Make The Perfect Cacio e Pepe”. Perfect. Felicity Cloake has basically done all the hard work for me and worked out the best way to do it.

I should have taken more warning from what she said.

Cacio e pepe has fully entered the collective psyche of foodies. It is part of the restaurant zeitgeist. It has become a trend. Trendy for good reason: beautiful in its three-ingredient simplicity, cheap and quick to put together – but very easy to get wrong. As Rachel Roddy notes, there is a fine line between clump and cream, and making a smooth sauce from dry cheese and water is a skill that needs to be learned, as I realised on my first, second and seventh attempts.

But still I carried on with a sense of optimism. It’s only cheesy pasta. How hard can it be?

This dish is actually made with four ingredients, as the pasta water plays an important part in forming the sauce.

Salted water goes on to boil and I grate Pecorino (which I have taken out of the fridge a bit earlier as it’s meant to be room temperature. Peppercorns are toasted in a dry pan and then crushed.

I scoop out some pasta water and leave to cool slightly and then I drain the pasta. This goes against my basic instincts, as surely you don’t want it to become sticky and dry out? Usually I follow Jamie Oliver’s advice and simply drag linguine out of the water and place straight into the sauce. But there isn’t a sauce yet.

The cheese and pepper go into a pan (not on the heat) and I furiously try and beat in the pasta water to make a paste. It is very lumpy. This just doesn’t feel right. Apparently it should resemble a béchamel in consistency. Mine definitely doesn’t.

I hope the pasta will help it melt so I put it in and toss together. Except all that happens is the pasta (which now slightly drier and has formed one large mass) spins around the middle of the pan and the cheesy lumps stick to the sides. I put it back on the heat to try and help melt it into a smoother sauce. The pasta loosens up, but the cheese stays firmly in greyish, peppery clumps.

Aidan and I agree this is not my best dish of lockdown.

Whilst I’m washing up in a huff after my failed dinner Aidan went back to the cook book shelf and pulled off “Made At Home” which is another Locatelli cookbook. There it was. A recipe for Cacio e Pepe.

Aidan leaves the book with me and makes a swift exit. I’m in such a strop I think he was worried I might throw the book at him.

But I don’t. I sit down and read what Locatelli has to say.

The first difference is he is more specific about pasta water. You want your water to be really starchy and therefore you don’t want to boil a massive pan of water for a small amount of pasta. Felicity did say this but Giorgio gives me a volume. To cook 125g of pasta (a generous portion for one, Aidan isn’t ready to eat this again) I need 750ml water. And I should salt the water less than usual.

Locatelli crushes black peppercorns but does not toast them. He adds them and some olive oil to a pan and then adds some of the pasta cooking water to form an emulsion.

Cacio e Pepe purists would think it cheating to add oil. In fact a lot of recipes I’ve seen use butter. I’m trying to keep things simple. But if Locatelli uses oil it must be OK. I add in a very small drizzle and continue.

He adds the pasta to the emulsion and then adds the cheese, tossing it all together vigorously. The emulsion definitely helps. It is less lumpy. But there are still some lumps there.

Plus this just doesn’t taste as luxurious as I remember it. In fact I’m not getting much cheese at all. Maybe that’s because half of it is still stuck to the pan.

I flick back a page in the “Made At Home Cookbook”. Here Locatelli talks about Cacio e Pepe. I didn’t read this! I just read the recipe on the following page.

He talks about how I should have a young Pecorino and a specific type of pepper. But Sainsburys don’t exactly give me much choice, so there’s not a lot I can do about that right now.

But he does say this

Don’t push the cheese just caress it against the microplane or grater so that it falls like snow, as if you press and condense it it will become grainy.

Giorgio Locatelli – Made at Home

Well I never knew that. I wish I had as that would have helped with my asparagus dish which was meant to have a “blizzard” of cheese.

I grate a bit of Pecorino how I normally would. And then I grate a bit without pushing the cheese at all. You can definitely tell the difference.

So armed with my snow-like cheese I try again. And this time I am generous. More oil. More pasta water (not to cook the pasta, just more in the sauce) more cheese. I also crush the peppercorns slightly finer as I realised large pieces of pepper seem to attract cheese lumps to form around them.

It looks a better consistency (I realise from the photos on here it may just seem like three identically and rather bland looking plates of pasta, but I promise there is a difference).

But the taste still isn’t as rich as I remember it.

I read Jamie Oliver’s recipe in “Jamie Cooks Italy”. Out comes the Trullo cookbook. I watch chefs from Padella and Bancone make it on Instagram videos. They all use butter.

Stefano from Bancone (remember I made his Gnocchi with Sage Butter) uses the same method of Felicity and Giorgio of quickly tossing the pasta and the cheese into the sauce.

However Jamie Oliver and the team at Trullo and Padella say differently. They say to let it sit. To go slow and let the cheese begin to melt on its own.

I’m going to give this a try. Mainly because I’m tired of pasta accidentally ending up on the floor when I furiously mix it together.

I have room temperature, cloud like Pecorino. I have exactly the right amount of water for my linguine. I have crushed black pepper.

The pasta goes into cook. The crushed pepper goes into a small frying pan and I add a generous knob of butter. Once this has melted in goes pasta water. Again, I’m being generous. Two ladlefuls.

I drag the linguine out of the cooking water and into the sauce, gently swirl it around and then add the cheese on top. I keep it on a low heat and I just watch it melt. Not completely, but just until the cheese is going soft and moulding to the pasta. Now, very slowly, I move the linguine around in the pan, adding a bit more cooking water to loosen the sauce.

I plate up. Not a cheesy lump in sight. It’s rich and silky and buttery. This really does prove it. Everything is better with butter.

Actually it is. Just go to Palatino.