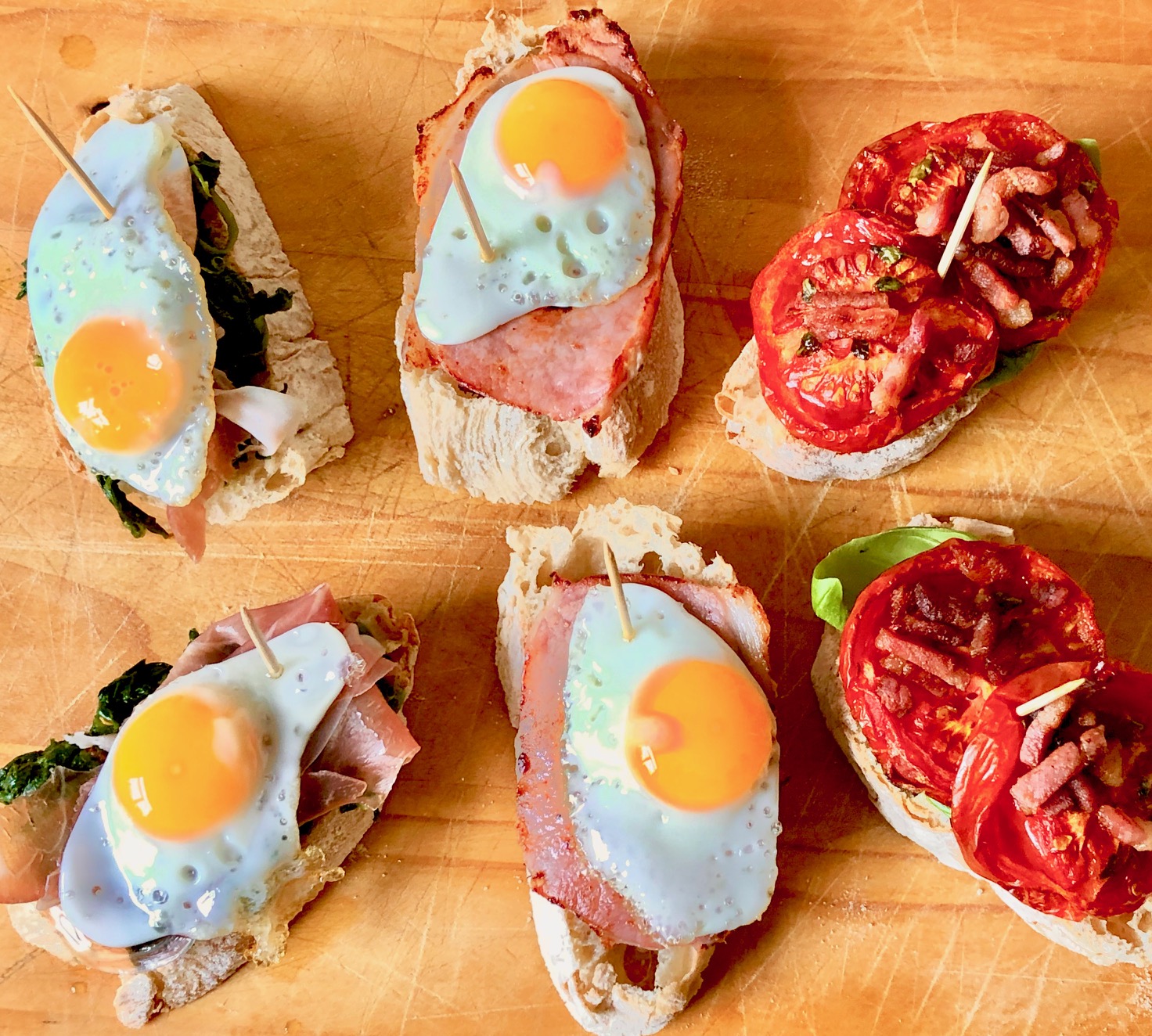 We should have been on our way back from a long weekend in San Sebastian right now. I’ve never been to this part of Spain before. This Basque city is basically a mecca for foodies. Any destination where the main thing to do is eat – that’s my idea of holiday heaven! Anyone else spend hours on trip advisor and restaurant websites before a trip? Just to try and work out where is best to eat!

I’ve never actually eaten in a Pix Pintxos restaurant, but I damn well will be as soon as they have reopened. In tribute to the holiday that almost was. For now dreaming of making it into Central London for dinner feels more in my reach than making it to Spain.

So I’m looking at the menu on the Pix website. Ah ha! There’s a pintxo with quails eggs on it! Perfect – seeing as I have more quail eggs to use up! By the end of this lockdown I might be able to write the definitive work – 101 things to cook with a quail egg!

The menu describes it as “Gran Reserva Serrano Ham & Spinach with Quail’s Egg on Ciabatta”. I can actually get pretty close to this! I don’t have any serrano ham, but I have got a bit of parma ham leftover so that will do. Theres a part baked ciabatta in the cupboard and spinach in the freezer. I feel like this is fate!

I decided I would fry the spinach in olive oil with a few chilli flakes – I love adding a spicy kick to a brunch dish!

But hold on – just one type of pintxos? That doesn’t seem like enough. A closer read of the Pix menu and I find another one that feels good for brunch – “Pancetta with Slow-cooked Cherry Tomatoes on Ciabatta”. I don’t have pancetta, but I have got some smoked bacon. And I don’t have cherry tomatoes but I have larger ones….

So now I’m slow roasting tomatoes in the oven for an hour (this brunch is getting later by the second). I simply cut tomatoes in half, put them on a baking tray with salt, pepper, olive oil and thyme and then roast for an hour in a low oven.

Everyone knows good things come in threes…. so one more needs to be devised. Aidan reminds me of some antipasti we had in Montefalcone, Italy when we went on holiday with my family years ago. We sat outside this restaurant on a hilltop admiring the view as we let the restaurant bring us whatever antipasti they chose.

This antipasti was simply some bacon served on warm bread topped with a fried quails egg! Great! I feel some Italian/Spanish fusion coming on. I can use the main round from a slice of back bacon for the Italian one. And then chop up the fatty end piece of the bacon to fry to go with the slow roasted tomatoes for the Spanish.

I cook the ciabatta in the oven, slice and lightly toast each piece. I fry the eggs (put each egg in a little dish first after cutting the shell open with a knife). And then all I do is assemble. I pop a couple of basil leaves under the slow roasted tomatoes for extra greenery. Finally, for the authentic pintxos experience I put a cocktail stick in each one – which does help when picking them up!

So there we have it – a trio of pintxos for a (rather late) brunch. It just goes to show with a little imagination you can make something new and delicious out of a few simple ingredients.