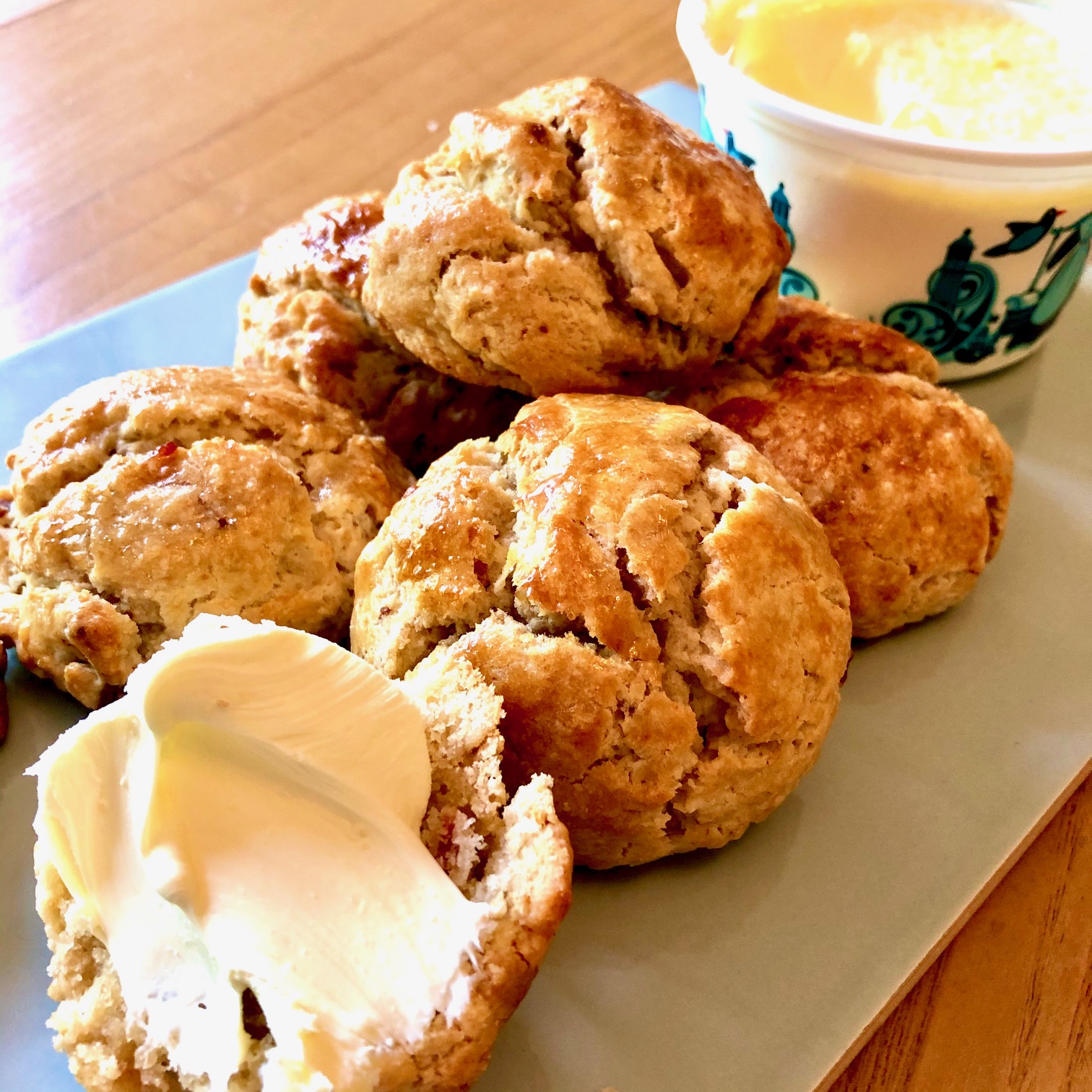 Definitely a Cornish theme emerging at the moment. As much as I can get excited by fresh Cornish fish, nothing will put a smile on my face like Cornish clotted cream.

Strange then, that they should be on the menu at French style brasserie Frenchie in Covent Garden.

As soon as I saw these scones on Instagram I knew I had to make them. Mainly because of the clotted cream. Any excuse to add that to the weekly shop.

I honestly could eat a pot of clotted cream with a spoon and be perfectly happy. No need for the scones. But I have been patient. This pot of joy has been sat in my fridge for a couple of days. Finally, time to make the scones!

I can just about make biscuits. There my baking talents end.

But the principles that most things can be improved with bacon and everything is improved with clotted cream means I’m feeling hopeful.

I’ve always been a bit apprehensive when someone calls baking simple. I just don’t have that natural talent, that sixth sense that all good bakers possess. Even if I measure, weigh and fold to the letter of a recipe, it still doesn’t look like it should.

That’s before it comes to the actual baking part where my efforts never rise (unless they are not supposed to) and seem to be both burnt and undercooked simultaneously.

I was once asked to make something for a bake sale. It was for charity so I couldn’t really say no. I found a recipe for a no bake chocolate fridge cake. No bake. That will be fine, I thought.

I totally underestimated how long it would take to make the fridge cake. By the time I had weighed, melted and mixed all the ingredients together there was not the required three hours setting time left before the dreaded bake sale.

So I popped the cake in the freezer to speed things up.

However that meant that less than an hour before the bake sale the cake was frozen solid. Oh dear.

In a moment of panic I put it into the oven to defrost. It seemed like my only option, the tray it was in was too big for the microwave. So my no bake cake ended up crisp on the outside and still pretty icy inside.

Even after disguising it with a mountain of icing sugar it didn’t look very appealing. And it looked better than it tasted.

No one bought any. I wasn’t asked to bake anything again.

But people keep telling me scones are simple. So here I go….

Even though I saw the recipe on Instagram, you can also find it here.

My main tip is read the recipe well ahead of when you need to start making these.

You need to cook the bacon, let it cool and then pop in the fridge until really cold. This takes a while (I resist the urge to put anything in the freezer this time).

The butter also needs to be cut into cubes and then put back in the fridge to get really cold. I have no idea why this is important. But I do what I’m told.

After that I have to admit it is pretty simple. I make a third of the recipe which makes 8 scones. I thought a full batch would be a bit excessive. So honestly, other than having to divide all the amounts into three (out comes the calculator again), it is pretty straightforward.

They smell amazing when they come out of the oven. There’s a reason that I made eight but there’s only six in this photo. We just couldn’t wait. As soon as they had cooled they were sliced open and slathered in cream.

Sure they might be a little crumbly, but if part of your scone falls apart just stick it back together with more clotted cream.

Delicious! There may be six left but they will not last long! I’m actually regretting not making more now.

The bacon adds a really amazing salty dimension and goes so well with the clotted cream. The maple syrup makes them sweet, but not too sweet. This is the most addictive thing I’ve made on this blog so far.

Frenchie serve it at the start of a meal. I think they would be great at breakfast, lunch, afternoon tea, late night snack. Or all of them. On the same day. Honestly one is not enough.

So thank you to the team at Frenchie. For sharing a recipe that is this delicious. And that even I can bake.