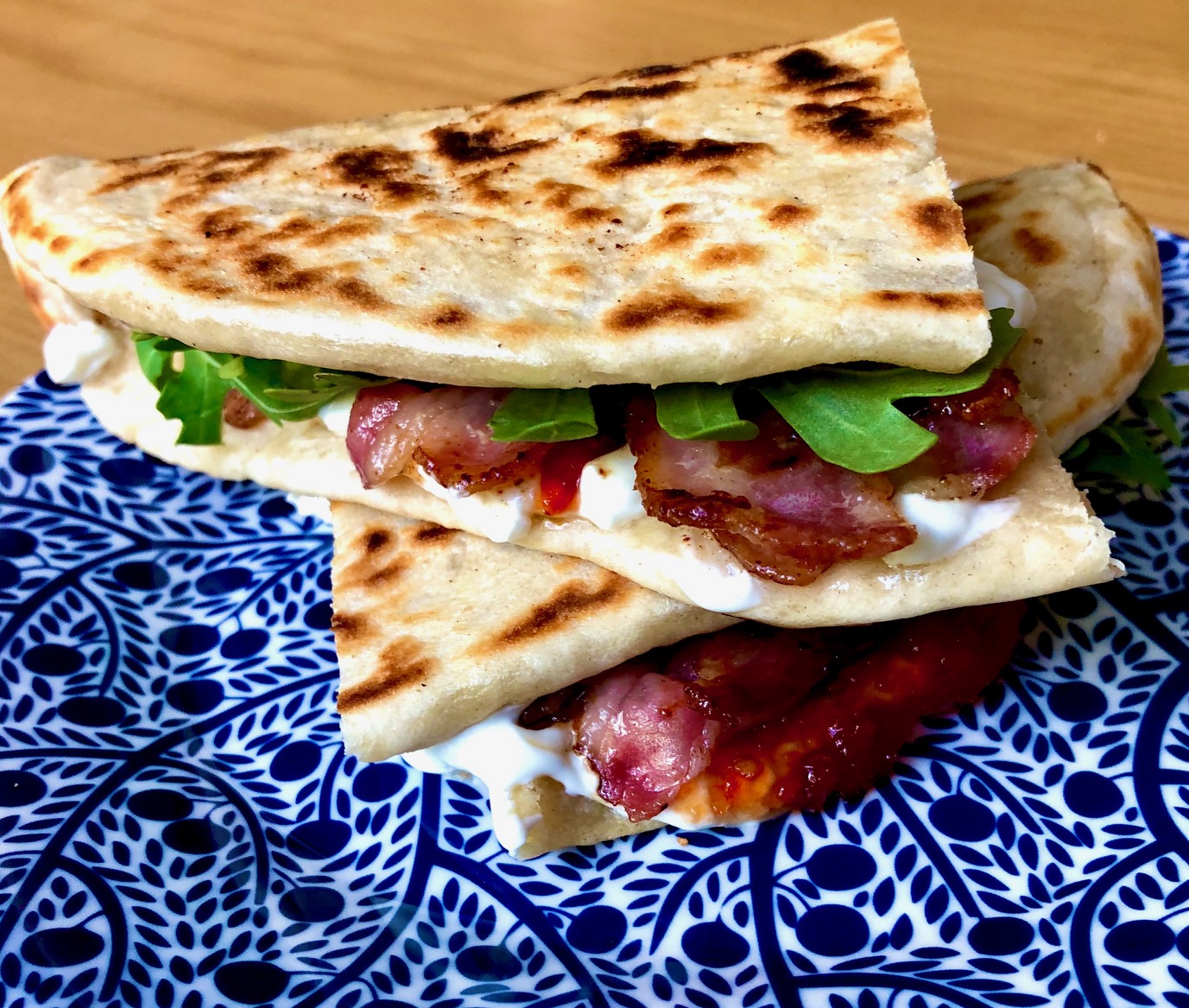 Clearing out of the fridge the other day reminded me that I still have some tomato and chilli jam left from when I made Grilled Mackerel.

Now I know exactly what to do with this!

The legendary Dishoom bacon naan roll. As their menu describes

Each naan is freshly baked — by hand, and to order — in the tandoor oven. It is then graced with a little cream cheese, chilli tomato jam and fresh herbs

Dishoom is a small chain of Indian restaurants inspired by the old Irani Cafés of Bombay. The food is amazing but it’s not somewhere I often go. Mainly because the there always seems to be a queue (they don’t take bookings). Especially for brunch.

So I’m going to try brunch at home. No queue here.

But the question is…. how do you make naan bread?

I know I don’t have a tandoor oven, so it won’t be as good, but I can still give it a try.

Turns out most naan recipes call for yeast. Which I don’t have.

Well that’s not technically true. I have one sachet left. But that’s as good as having none. I can’t possible use the last sachet. Then if there was some kind of yeast based emergency I would be screwed.

Nope that sachet is destined to stay in the cupboard for the foreseeable future.

I swear talking about yeast has become the equivalent of chatting about the weather. Seeing as we are staying in we don’t seem to care about the weather as much anymore. So we have had to find something else to talk about. Now it seems we channel our endless cycle of optimism and disappointment into yeast. We talk about the possibility of yeast being in stock in the supermarket in the same way we used to dream about a sunny bank holiday.

So how do you make a no yeast naan? This is sounding less authentic by the second.

But right there on my Instagram feed is a recipe for no yeast naan from My Food Story. This feels like fate.

Making the dough is easy enough. It uses a lot less yoghurt than the quick yoghurt flatbreads I make, which are simply equal parts yoghurt and flour. But with the oil and the water it comes together into a ball pretty quickly and I pop it in the fridge to rest.

I roll it out as one large naan to about a quarter inch thick. This roughly fills the base of my larger non stick frying pan. Once the pan is hot in it goes (I don’t bother with toppings) and on goes the lid. I can see why this would help it puff up, as the steam will help it cook.

But mine doesn’t really puff up that much.

I think next time I would either use self raising flour or put a bit more baking powder in. Actually thinking about it the recipe asks for baking soda…. so it that baking powder or bicarbonate of soda? To be honest I never really know what the difference is.

Also I think trying to make one huge naan (so I can fold it and cut it in half like Dishoom do) didn’t help. Its lovely and fluffy around the edges but still a bit dense in the middle. Next time I would make two smaller ones and then just sandwich the bacon between them.

I tell you what though, it tastes pretty close to naan. Just not quite got the texture right.

Do you want to know what you can do to make it extra special? Once your naan is cooked rather than brushing it with butter, lightly brush it with bacon fat from the pan. Trust me that makes all the difference.

A slightly doughy naan can be forgiven when it’s glossy with bacon fat.

After adding the cream cheese, tomato chilli jam and bacon inside I topped mine with a mix of coriander and rocket. The greenery makes it healthier right? It definitely counteracts the bacon fat, I’m sure of it.

As I’m eating it I have a look at Dishoom’s instagram page.

Oh you have got to be kidding me. They’ve posted their naan recipe online.

And it doesn’t need yeast. Typical.